If the return of Godspeed You! Black Emperor last year reminded us anything, it was just how extravagant post-rock can be. Never exactly the most restrained of bands, whether you find their more grandiose tendencies pompous or exhilerating is a matter of taste. What is undeniable is that, compared to your average indie 4-piece, organising rehearsals, song-writing sessions, recording slots and tours must be a bloody nightmare.

That seems to have been the conclusion ERAAS came to. Robert Toher and Austin Stawiarz were formerly both members of Apse, a Connecticut post-rock act signed to ATP Recordings, before coming to the conclusion that having six members in a band was more trouble than it was worth. As Toher puts it, “we had put out kind of a shit album that got bad reviews, and it was the kind of album that, I thought, had too many different hands in the pot”.

He started writing music alone, aiming to strip the bombast from Apse’s music and make something more minimal, before getting Stawiarz on board. The results are encouraging. Their eponymous debut album (which you can stream in its entirety above) was released last year, and was full of richly dark music that never spooned more than what was necessary onto your plate. Whether it was chanting over eastern scales like an electronic OM on ‘Skinning’ or mixing clicky rhythms with brooding bass in a Bauhaus style on ‘Briar Path’, they proved that sometimes you can achieve more by doing less.

Admittedly, the occult vibes can sometimes feel a bit tacked on (the hooded drummers and brandished knives on their new video for ‘Ghost’, below, are a case in point), on tracks like ‘A Presence’ they manage to sound like The Soft Moon if they kicked their irritating eighties fixation, or a less featureless Factory Floor. And while the video for ‘Ghost’ may be overkill, the track itself is delicious – seductive, sinister and darkly cinematic, its pitched somewhere between Joy Division and a nodding out Birthday Party, only with a much smoother sheen than that suggests.

When playing live they expand to a four-piece so as to avoid having to play to backing tracks – one of Toher’s pet hates. “I feel like 75% of the bands we play with play to a pro tools backing track that comprises half of their stage sound. It’s a shame,” he states. He may have gone minimal, but he doesn’t want to skimp on the essentials. Judging by their debut, which too many (including us) slept on in 2012, ERAAS’ next album could well be an essential you won’t want to neglect either. 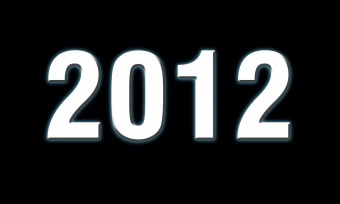 It's been one of those years where things could've been a lot better, but also could've been a lot worse. The Arab Spring didn't end up bringing wholesale peace or democracy to the region, but then it didn't bring mass genocide or nuclear war either. The Olympics cost Great Britain a ridiculous sum of money at a time when public services were being cut like a slowly melting Vienetta, but then at least we won a few medals and nobody got blown up. Barack Obama managed to keep Mental Romney out of the White House, but then isn't likely to be able to do much good himself after the Republicans retained the House. Silvio Berlusconi finally got booted out, vowing to leave "this shitty country of which I'm sickened", but has since decided he actually quite enjoyed running said shitty country and is trying to worm his way back into power. The world has kept on turning, from good to bad and back again, like a football that's rolled through a turd. The same has, as always, been the case for music - but it seems on reflection like we've had more good than bad this year. Granted, Justin Bieber still sells ten thousand records every time he grabs his crotch, but there was still plenty to get excited about in 2012. Hip-hop, the general quality of which had been akin to a jaffa cake left in an airing cupboard over the last few years, suddenly became exciting again thanks to the emergence of artists like Kendrick Lamar, Angel Haze, A$AP Rocky and Mykki Blanco, while old hands like Killer Mike, DOOM and Aesop Rock produced their best work in an aeon too. Elsewhere, a handful of indie bands managed to buck the trend and make music that was actually quite interesting, with Alt-J, Django Django and TOY knocking out very decent debuts, while Grimes managed to stay crossover flavour of the month for, well, about twelve months. Electronic music was in rude health as well, with long-overdue returns from Nathan Fake and Michael Mayer, and excellent first albums from the likes of Anstam, LHF and Christian Löffler. Even the pop world wasn't too dispiriting: Adele produced the best Bond theme in living memory, and whatever you think about Psy, 'Gangnam Style' was a heap more interesting than the usual chart-topping bollocks. Best of all, artists like AlunaGeorge, Joey Bada$$ and Dog Bite are already indicating that 2013 might be even better. But that's enough fawning and blethering. The easiest way to work out whether you've missed anything decent this year is to simply cast your eye over our top 100 tracks of the year below. Even better, you can listen to them on Spotify using the player below. Gonjasufi's 'The Blame' clinched the top spot; a slightly odd choice maybe seeing as it came out in January to relatively little fuss, but that's not the point. Fact is, if the Mayans are proved right and the world is about to blow up, this is the track we'd want playing over the end credits. Fade out...