Last Friday, The Bowery was truly the only place to be in Sheffield. For it was there that Alt-J were booked to play, for free, as part of the city’s incredible Tramlines festival. With the main stages not due to open until the following day, the band were definitely the biggest draw of the night with a huge queue forming hours before they arrived.

All the more surprising, then, that in the end they were blown off stage by the two bands on before them: Kult Country and Manchester’s G R E A T W A V E S. The latter in particular were hypnotically brilliant, managing to coax a huge sound out of the tiny venue that Alt-J just couldn’t match. With the windows and doors of The Bowery wide open so that those in the queue could at least hear what was happening, they preceded to coax out the most succulent of slow burns that left everyone stunned.

Despite not particularly sounding like either of them, the music is somehow reminiscent of both Spirtualized and Fuck Buttons, possessing both the grand emotional depth of the former and the booming sonics and occasional yelps of the latter. Plus, like both, they’d sound bloody great in a cathedral. While they haven’t yet been quite able to match the heart-clutching intensity of their live sound in the studio, they’re sure to carry on winning converts in concert until they find a producer that’ll do them justice. 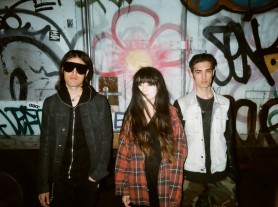 Another year, another doomed attempt by music journalists to convince the listening public that a grunge revival is imminent. It never is. Face it, those flannel shirts are just gonna have to stay in the cupboard. Still, that won't stop some from putting GHXST at the vanguard of a new grunge attack. Not least the band themselves, who describe their sound as 'Deth-Grunge'. What 'Deth-Grunge' is, apart from another example of irritating spelling in popular music, is something a little different. Granted it has all the heavy-lidded riffs and teenage angst of grunge, but there's a weightless warmth to frontwoman Shelley X's singing that plays off nicely against Chris Wild's gruff, gritty riffs and Nathan La Guerra's JAMC-style drums. If the grunge revival ever does arrive, let's hope it sounds like this. Until then, keep those vintage TAD t-shirts firmly locked away.
Read More