It’s no great surprise to learn that TOY are pals of The Horrors – Faris Badwan and friends are the first band that spring to mind upon listening to this, the band’s self-titled debut album. Which is odd, because The Horrors are known as the band that always make you think of other bands. Does that make TOY the ultimate derivative band? Thankfully not, as despite their influences being writ so large you could stack them on top of each other and recreate Stonehenge, they’re talented enough songwriters to be considered in their own right.

That isn’t immediately apparent though. Putting aside preconceptions aroused by three of the party previously being in the deeply uninspiring Joe Lean & The Jing Jang Jong, opening track, “Colours Running Out”, still comes across as a wee bit unimaginative and underwhelming, with only the mewling keyboards providing much interest. While the poppy shoegaze of “The Reason Why” lifts the mood slightly, things still sound slightly lethargic until the extended instrumental close of “Dead And Gone” takes the volume up several notches (although even then you can’t help noticing it sounds like a less interesting version of “Bird Is Broke (Won’t Sing)” by Indian Jewelry).

Fortunately, if the first three tracks are ineffectual swipes to the forelocks, the fourth slams you right in the solar plexus. A classic break-up song full of bitterness and regret, the lyrics to “Lose My Way” – “You can’t bring yourself to look me in the eye / When we say goodbye” – all ring painfully true, and the tune is absurdly catchy. The standard is maintained with “Drifting Deeper”, an indie take on Krautrock that’s better than the usual indie take on Krautrock, sounding a bit like The Breeders tag-teaming with Siinai (although to follow that with another motorik track called “Motoring” has to be tongue in cheek, right?).

After the schamltzy and forgettable “Heart Skips A Beat”, the album peaks with the mighty “Strange”, a gothed-up number with a huge instrumental chorus that looms over you like a vampire, made even more striking by an effectively understated verse. While the rest of the album can’t quite keep up that intensity, the delicate “Omni” is a lovely little interlude, and the breackneck tempo of closer “Kopter” stops the energy from sapping (which is lucky as it’s almost ten minutes long).

In terms of comparison to their mates in The Horrors, the album recalls the sonic template of “Primary Colours”, but does so in a sweeter, less affected way. While Tom Dougall’s vocals may not be blessed with excessive personality, they project more honesty than Badwan’s imitative posturing, and Alejandra Diez’s keyboards glaze the album like a layer of honey on a hot ham. Like most decent debut albums, “TOY” speaks much about the band’s potential: with a bit of luck, a good album here will begat a great one next time around. 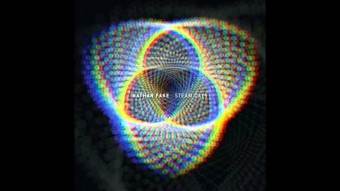 It's been six years since the bubbly, psychedelic electronica of Nathan Fake's debut album, "Drowning In A Sea Of Love", first started swivelling heads. While the slightly harder-to-swallow pill of 2009's mini-album "Hard Lines" partially helped ease withdrawal from the heady highs of tracks like the blissful "Charlie's House" and the Ulrich Schnauss-alike "The Sky Was Pink", this new album feels like a more satisfying update on his sound. Opening with the superb "Paean", it's an album that showcases a deft ability to make something warm and emotional out of the coldest, hardest tools. The title, "Steam Days", gives a clue as to the dominant feeling here - nostalgia. Not neccessarily nostalgia for an imagined, byegone era of railway children and coal scuttles, although there is a touch of that, but of a personal history too. The punishingly heavy groans and whirrs of "World Of Spectrum", which musically falls somewhere between early Autechre and dubstep, is a reference to an online database full of the ZX Spectrum games that Fake still plays, while the title of "Warble Epics", the shifting, slightly sinister number that closes the album, comes from an old, remembered dream; there are, in fact, several points where the music on "Steam Days" puts you into the mind of someone struggling to wake up from a fantastical vision. It's not just personal memory that floods the record though - local history is also a factor. Bouncy yet slightly melancholic lead single "Iceni Strings" takes its name from a Celtic tribe that hailed from Fake's native Norfolk, while "Neketona" (musically reminiscent of James Holden, whose label Border Community is releasing the album) is the old Anglo-Saxon name for Necton, the village where he grew up. "Harnser" manages to combine both personal and local past by being both the Norfolk word for 'heron' and the name of his Dad's old handyman business (it also sounds like a retro-futuristic remix of "Saturday" by Electrelane). Musically, though some tracks sound slightly dated ("Old Light" is brilliant, but does sound like something off of Rephlex's classic "Braindance" compilation), "Steam Days" is a marked improvement on "Hard Lines". In fact, though it lacks a couple of those sweet, bullseye hits that got "Drowning..." so much attention, it's the most consistently enjoyable work he's produced. The drawn-out soft pads that often pick out the melody never get boring, and the rhythm and tempo change often enough to counter any lurking accusations of predictability. Ultimately, it's an album that manages to sound both futuristic and nostalgic at the same time. It harks back towards a simpler time while reflecting an increasingly complicated present/future, an era that, while it may inspire pessimism in many, is brighter for having Nathan Fake in it.
Read More