Kompakt have put out some fantastic records over the last few years, so it’s all the more impressive that this release from co-owner Michael Mayer is among the best. It’s also fitting that it perfectly sums up what the label’s best at, namely a mixture of minimal beats and ambient bliss with the ability to engage both your head and your feet. It may only be his second album proper, but you can tell straight away that you’re in the hands of a pro.

The album kicks off with a track that would stand out on any of Kompakt’s fabled “Pop Ambient” compilations, the unfeasibly lush ‘Sully’. A carefully crafted combination of breathy, hissing synths and delicate chimes, it’s the sort of music you’d imagine would play in your head if you unexpectedly woke up in a snow drift (if the snow consisted entirely of pure MDMA). It’s music to sit on mountains to, and, contradicting its title, feels completely unsullied.

“Lamusetwa” brings in our first beat, helped along with regular injections of pulse-maintaining bleeps and squiggly synths, sounding like a strident march to the top of the peak “Sully” sits upon. The title track (and what a title!) is similarly driving, building upon a vintage-sounding bassline with drawn-out, high-pitched tones and blunt 8-bit plunks. It makes you want to hunt androids with lasers while wearing figure-hugging synthetic bodysuits, which can only be a good thing. Mayer apparently became obsessed with film soundtracks while making this album, and there is more than a touch of Vangelis and John Carpenter here and elsewhere.

While ‘Baumhaus’, with its reverb-ridden sax, gentle harp, glockenspiel and birdsong combo, verges into being a little too twee, ‘Voigt Kampff Test’ soon picks the pace back up by pitching itself somewhere between an urgent news bulletin and the soundtrack from an action-adventure arcade game. ‘Neue Furche’, meanwhile, provides the roughest rhythms on the records – it’s an inigorating slice of minimal techno that’s no less fun for the fact it sounds quite dated.

In fact, most of record is exactly that: fun. Which is quite a feat in a genre which is sometimes accused of lacking that element. Even better, the bits that aren’t overtly fun are generally overtly gorgeous instead. Jeppe Kjellberg of WhoMadeWho’s appearance on the somewhat uninspired ‘Good Times’ aside, “Mantasy” really is the stuff dreams are made of. 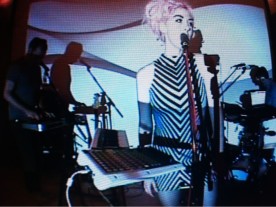 It's fair to say that when acclaimed producer Nigel Godrich (aka "Radiohead's sixth member") and Beck's favourite drummer Joey Waronker got together to form a band, their extensive music industry connections meant they had their choice of individuals to front it. Yet they eschewed the easy way out of simply getting a load of famous mates to phone in guest spots and went on a hunt to find someone truly suitable, using the pleasingly old-school methods of sticking adverts up in art colleges and trawling through the gig guides. Eventually they found Laura Bettinson, the woman behind FEMME, known for mixing sweet pop music with exuberant stagecraft. With the trio finally complete, work immediately began on their self-titled debut album. Of course, much of the focus was always going to be on Godrich's work with Radiohead, and Ultraísta's sound will certainly prove accessible to fans of the band. The chiselled beats and effervescent electronics of opening track "Bad Insect" loosely recall the production style of "The King Of Limbs", while Bettinson's vocals float like a bubble in the middle of the hubbub. Yet Ultraista's music is brighter, freer and more upbeat, with "Static Light" sounding like a pop song that's been shattered into a thousand pieces and the shards scooped up, put into a snowglobe and vigourously shaken. "Our Song" is similarly affecting, each descending keyboard pattern and skittering beat sounding like a dead autumn leaf falling to the floor. The combination of gorgeous synths, cut-up backing vocals and clinical rhythms is worked hard throughout the album - Ultraísta have clearly worked hard to forge a defining sound. They do occasionally fiddle with the formula, such as on, erm, "Strange Formula", which employs a dizzying 6/8 rhythm to create a feeling of staggering around a strange town while out of your head, while "Party Line" swaps the synths for piano in order to create some heightened intimacy. They save the best for last though, with the stunning "You're Out", a hypnotic and utterly beautiful track with an emotional spike at its heart. Bettinson's vocals are at their best - Thom who? In fact, that's the best indication of the record's success; while much of the pre-release hype surrounded the links to Radiohead, by the end of the record those links are all but forgotten. Ultraísta have created their own niche, and it's a very special one...
Read More