The most enjoyable release on Full Time Hobby for some time, “Tourist/Sleeper” is a mesmeric mini-album that takes the ‘folktronica’ stick generally used to beat vaguely twee bedroom artists with, smooths it down with some digital sandpaper, then hurls it lovingly into the listener’s ears like a javelin (or, indeed, like Javelin). Seams (not to be confused with the Bitch Magnet/Superchunk offshoot Seam (or a million other bands with similar names)) is known to his family as James Welch, a “Berlin by way of Hampshire” producer whose day job is working for Soundcloud’s community team – little surprise then that the entire record is streaming there for your delectation.

While it has to be said that Seams doesn’t so much mine fellow South of England-ers Gold Panda and Four Tet for ideas as strip them clean like an Apple-sponsored militia rampaging through Congolese mineral deposits, he does manage to make their sound somehow more accessible. The clipped samples and reverberating percussion on “Hung Markets” are perfectly judged, while “The Glow” is as clean, warm and absorbing as a freshly laundered dresing gown. Elsewhere, the beat on “Nachtmusik” kicks in just before things get too tinkly, and the slowed-down vocal samples of “Carnival” evoke the feeling of being pumped full of dissociatives then shoved into a large crowd.

“Punch”, meanwhile, takes things firmly in the direction of the dancefloor at a tempo which even those he mimics would shy away from. Critics will argue that Seams shys away from anything too dangerous or experimental, but while he does follow a familiar path you get the sense he’s spotting a few things others missed along the same route. While Derwin “Gold Panda” Lau embarks on a headline tour of the USA and Kieran “Four Tet” Hebden hears his music being blasted out of multiple Olympic venues, James Welch’s smoother, easier sound could prove capable of surpassing both their successes. 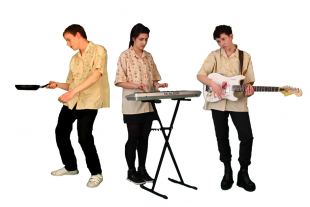 Mica 'Micachu' Levi's last studio album with The Shapes was easily one of the best records of 2009. Bewilderingly left off that year's Mercury Music Prize short-list, the band's invigoratingly inventive approach to pop music still won them wide critical acclaim, and left fans ravenous for more. There have been slim pickings for those fans since though. Last year's “Chopped & Screwed” LP, a live collaboration with the London Sinfonietta, was a curious, intermittently engaging album that nevertheless felt like something of a stop-gap. Micachu herself seemed to agree, cheekily dismissing it as "a load of old bollocks" and admitting she "felt like a chancer". Perhaps she was just trying to pre-empt any accusations of precociousness after having been appointed the South Bank Centre's youngest ever artist-in-residence, as it's hard to believe she didn't feel any pride for the source material. Indeed, the best track from that album, "Low Dogg", is put through the blender and included here (and retains the buzz of spinning blades from the process). An insane re-imagining of an old track is about as unoriginal as the album gets. "OK" is all crossed-wires and lurching insistence, "Fall" fills your ears with woozy ketamine jazz, while the bizarre phone calls that intersect "Glamour" could only make sense on an album this insane. The videos the band have made for every track only add to the offbeat cartoonishness. Naturally, it'll be almost unlistenable to people of a certain sensitive disposition (i.e. those who aren't keen on work tools and vacuum cleaners being used as instruments), and the songs aren't as instantly catchy as some of the classics on "Jewellery". Yet, though "Never" still sounds very similar to that album, it also still sounds extremely fresh. Since they appeared in 2009, no one has made an album that sounds at all like Micachu & The Shapes, and it's unlikely any other band ever will. So they'd better keep on bloody making them.
Read More