It’s been six years since the bubbly, psychedelic electronica of Nathan Fake’s debut album, “Drowning In A Sea Of Love”, first started swivelling heads. While the slightly harder-to-swallow pill of 2009’s mini-album “Hard Lines” partially helped ease withdrawal from the heady highs of tracks like the blissful “Charlie’s House” and the Ulrich Schnauss-alike “The Sky Was Pink”, this new album feels like a more satisfying update on his sound. Opening with the superb “Paean”, it’s an album that showcases a deft ability to make something warm and emotional out of the coldest, hardest tools.

The title, “Steam Days”, gives a clue as to the dominant feeling here – nostalgia. Not neccessarily nostalgia for an imagined, byegone era of railway children and coal scuttles, although there is a touch of that, but of a personal history too. The punishingly heavy groans and whirrs of “World Of Spectrum”, which musically falls somewhere between early Autechre and dubstep, is a reference to an online database full of the ZX Spectrum games that Fake still plays, while the title of “Warble Epics”, the shifting, slightly sinister number that closes the album, comes from an old, remembered dream; there are, in fact, several points where the music on “Steam Days” puts you into the mind of someone struggling to wake up from a fantastical vision.

It’s not just personal memory that floods the record though – local history is also a factor. Bouncy yet slightly melancholic lead single “Iceni Strings” takes its name from a Celtic tribe that hailed from Fake’s native Norfolk, while “Neketona” (musically reminiscent of James Holden, whose label Border Community is releasing the album) is the old Anglo-Saxon name for Necton, the village where he grew up. “Harnser” manages to combine both personal and local past by being both the Norfolk word for ‘heron’ and the name of his Dad’s old handyman business (it also sounds like a retro-futuristic remix of “Saturday” by Electrelane).

Musically, though some tracks sound slightly dated (“Old Light” is brilliant, but does sound like something off of Rephlex’s classic “Braindance” compilation), “Steam Days” is a marked improvement on “Hard Lines”. In fact, though it lacks a couple of those sweet, bullseye hits that got “Drowning…” so much attention, it’s the most consistently enjoyable work he’s produced. The drawn-out soft pads that often pick out the melody never get boring, and the rhythm and tempo change often enough to counter any lurking accusations of predictability.

Ultimately, it’s an album that manages to sound both futuristic and nostalgic at the same time. It harks back towards a simpler time while reflecting an increasingly complicated present/future, an era that, while it may inspire pessimism in many, is brighter for having Nathan Fake in it. 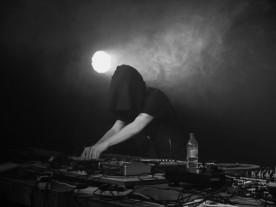 Depending on what you read, the artist known as Holy Other is either an enigma shrouded in a mystery hidden inside a Burial-esque cliché, or just a bloke from Manchester who's a bit shy. What's not up for debate is that the time that Holy Other has spent holed up away from the intrusive glare of the music press has been pretty well spent, confirmed by this moody, immersive debut album. Then again, we all thought that about Balam Acab's "Wander/Wonder" album last year, and it'd be interested to see how many people are still listening to that now the hype has died down; personally it went from a twice-a-day album to a something-to-put-on-before-sleeping album to a track-pops-up-in-shuffle-occasionally album surprisingly quickly. There are quite a few parallels here too: both artists are secretive bedroom dwellers who make sparse, slow-motion excursions into crypto-R n' B that sound like they've been recorded at the bottom of a mystical lagoon. Both are signed to the excellent Tri Angle Records too. However, while "Wander/Wonder" occasionally strayed into sweet and inoffensive territory ("like Pinky and Perky's chill-out album" as one unkind colleague put it), "Held" sticks pretty firmly to the shadows. Not to say it's gloomy - the layered vocal samples on "Tense Past" and "Held" are quite uplifting in fact - but it does feel like it's been lightly doused in the cold mist of Manchester rain. It's the smaller details that draw you in though: the arrhythmic rattles and bloops on "(W)here" (slinging in the odd rhythmically contradictory element is one of Holy Other's most effective tricks), or the sampled sharp intakes of breath on "Nothing Here". Most striking though is just how huge everything sounds, with lashings of reverb making even the more minimal moments soar. Yet at the same time everything also sounds highly introspective, although that impression may be partly influenced by Holy Other's secluded public persona. Still, though he has admitted that he feels "like this “anonymity” thing is kind of coming to an end", don't expect a significant change in mood - in his own words, “There’s never going to be any summer vibes”. He's found an atmosphere all of his own, and "Held" allows us to breathe it in, deeply and slowly.
Read More