Ever since the release of the eponymous “Music Has The Right To Children” barely a month goes by without a misguidedly over-excited reviewer comparing some outfit or other to Boards of Canada. Almost always, it’s unjustified. Either the act in question tries to go for the same lush-yet-creepy sound in a hopelessly hamfisted way, or they manage to nail the sound but leave it devoid of that very specific atmosphere. You know, the one that makes you feel like you’re lost in space and adrift at sea simultaneously.

Babe, Terror, a one-man bedroom adventurer from Sao Paulo, is one of the few artists who can lay fair claim to that liminal territory. Though “Knights” is technically an EP, it disseminates dissasociative qualities that seem to make tracks drift for days before disappearing in seconds (its actual length is a digestible 34 minutes). Opening track “Lifantastic I” sets the tone for the rest of the record, with twisted vocal samples drifting over shifting tones and a murmuring heartbeat. Occasionally, everything seems to fold in on itself. If you don’t pay attention you might find your eyes rolling into the back of your head (even if you do pay atention you might find them spinning there regardless).

“Savagestic” seals the musical link with Warp’s Scottish duo, combining a lo-fi beat like those on “A Few Old Tracks” with reversed, layered synth tones that drift from harmony to dissonance as if it’s the most natural thing in the world. Following the brief, beat-less break that is “Cleric”, “Lifantastic II” expands on the opening track’s themes, although in all honesty a combined seventeen minutes is probably overkill. Thankfully, closing track “War” adds something a bit new. The vocals sound like someone held a bottle in front of the singer’s lips, sealed it, and then recorded its contents back in the studio. Breathy beyond recognition, and refreshingly free of dischord, it leaves the listener on an uplifting zephyr. Babe, Terror has managed to nail Boards of Canada’s aura; the interesting thing will be to see where he can take it now.

Cameras - In Your Room 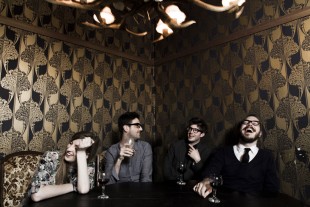 If you're Australian, you may be wondering how this can possibly be album of the week. After all, it came out the best part of a year ago Down Under, and to a rapturous reception too. So why has it taken so long to get a release over here? Not only have the band been supporting the likes of Roxy Music and Yann Tiersen in their native land, but their sound couldn't be more up NME's street if it put on a stupid hat, incessantly mentioned drugs in interviews and dated someone off the telly. So why have they largely been ignored in the UK? Has the insuppressable memory of Jet sworn everyone off Australian indie? To my ears this is one of the most accomplished indie albums in some time, and I don't mean "accomplished indie" in the way I normally do, i.e. "well-executed but dull-as-fuck". Opening track "Polarise" is a swooping, unfurling charmer with the tom-centric percussion kept low in the mix so it doesn't become overpowering like it often can (see: Esben & The Witch). Eleanor Dunlop's yearning vocals actually sound quite English, and the fact the following track, a rollicking pounder with eighties-style vocals courtesy of Dunlop's male counterpart Fraser Harvey, is named after a borough of Berlin, makes you wonder whether Cameras are consciously aiming for a European rather than Antipodean vibe. Yet it is an American band they most often resemble. Not only do Harvey's lyrics and melodies sound similar to those of Interpol frontman Paul Banks, but the brow-furrowed beats of drummer Ben Mason and the mostly melancholy mood also remind one of the New York band. Yet Cameras seem to take themselves less seriously - asked what to expect from the band live, Harvey admitted, "Some of our tunes can be...a bit pompous...I'm quite clumsy so you can probably expect me to fall over at some point too" - and they regularly chuck in enchanting piano turns or uplifting guitar lines to light up the occasional gloom. The lead vocals are also sequenced pleasingly, with Dunlop and Harvey swapping duties often enough to keep things fresh throughout, and providing echoes of lush LA act Autolux whenever they combine. Yet the album's instrumental title track proves that Cameras remain captivating even when no one engages their larynx. Perhaps it would've gone down better over here a decade ago, but "In Your Room" does indeed deserve to be heard in your room, whether it be in Sydney or Surbiton. It's time to forget Jet and scope out Cameras instead.
Read More