Like yellowing toenails clipped from increasingly cold feet, the descending leaves now surrounding us indicate the unstoppable onset of autumn. Ah well, forget the swiftly diminishing prospects of being able to leave work before sundown as we look back at some of the best EPs to have been released before the summer bade a sheepish farewell, from fresh Cabbage and Clap! Clap! to debuts by Sudan Archives and Mighty Lord Deathman…

Our sister site MusicMap has been banging on about Beating Heart for a while now, praising both last year’s Malawi compilation (which featured the likes of Luke Vibert, Machinedrum and Ibibio Sound Machine) and Drew Moyo’s recent Vimbuza EP. The latest Beating Heart release is the third instalment of their South Africa series of EPs, letting a typically impressive cast of European and South African artists loose on the International Library of African Music.

Daev Martin kicks things off in sultry style, utilising the brushed brass voice of Sió to give ‘Chasing’ a brandy-smooth finish. Throwing Shade then serves up some ‘Wonderful Sushi’, although sadly its limp mix of breathy flute and wallpaper synth is about as wonderful as it is made of raw fish. No need to worry though as Cornish newcomer Hunrosa gets us back on track with the mushrooming beauty of ‘Mohodo’, which is like a particularly funky breeze blowing through a field full of wind-chimes.

The stoutly named Thor Rixon then rounds things off in fine style with ‘Tula Mutwana’, subsuming vocal samples within a hazily romantic arrangement that could’ve been skinned up by Mac DeMarco during a Cape Town pit-stop. It’s another fine release and all proceeds go to the Women’s Legal Centre and the Access Music Project in Grahamstown, so fill your boots.

Cabbage – The Extended Play of Cruelty

The latest EP by Mossley five-piece Cabbage would earn a place on this list on the strength of third track ‘A Network Betrayal’ alone, with its acerbic take-down of Britain’s unfit-for-purpose rail system. Any song that calls out Southern Rail boss Charles Horton by name in the first verse is onto a winner (especially when drawing attention to his indefensible £500k salary), before going on to shoot down extortionate ticket prices, jobsworth conductors and sundry other joys familiar to anyone who has traversed the UK by rail this century.

Fortunately the rest of the EP also offers first class service on a cheap day return budget. The title track’s rollicking chorus rumbles into the buzzing Fat White fury of ‘Fraudulent Artist’ before hitting the unbreachable buffers of ‘A Network Betrayal’. On the other side, a pleasantly low-key, dropped keys interlude entitled ‘Ertriken’ leads into the anarchic ‘Asa Morley’, an apparent tribute to the band’s drummer and his salad-making / Football Manager skills. A beefy, leering and surreal finish to an EP that’s only real cruelty is in its brevity.

Having already produced a track for the aforementioned Beating Heart, Cristiano ‘Clap! Clap!’ Crisci gets his mitts on another extensive audio archive, this time the library of field recordings at Amsterdam’s Tropenmuseum. This is far from some impulsive smash ‘n’ grab sample-fest though, with Crisci stating his “responsibility to approach the project with respect for the sources of recordings, as many were from the ex-Colonies of the Netherlands”. Wise move.

While the tempos and intensity are taken down a notch or two (certainly in comparison to fiery debut album Tayi Bebba), Crisci’s prodigious sonic invention is still in evidence. Opening with the wobbly Brainfeeder-style jazziness of ‘Kabul To Paramaribo’ and the smooth keys of ‘Lusaka Dreams’, the EP’s mood stays consistently sunny, not least on the glittering, glitchy house of ‘Jufra’s Touch’ and ‘Djeffara’. The cool, supple ‘Tashkent’s Sharp Moon Looks Like The Night’s Smile’ is another highlight, before things are brought to a graceful close with the gorgeously swung ‘To Open A Feeling By Closing It With An Embrace’.

Datassette – Mannequin on the Run

The title of Datassette’s latest EP sounds like some lost, low-budget sci-fi thriller, and pleasingly the title track would indeed make the perfect soundtrack to a lost, low-budget sci-fi thriller. It’s hard not to imagine a mis-matched human/android duo making good their escape while enjoying its acid electro flourishes, as they’re fried to a juicy crisp. ‘Death Perception’ then ramps up the tension (and the tempo) with heart-fluttering snares and a murky, enigmatic chord progression.

The moods are never overplayed though, nor is this just a simple exercise in retro-futurism. ‘Metropolis Light Transport’ is a major-key acid jamboree full of effervescent synths and headphone-worthy stereo mixing. The sumptuous, slightly stoned ‘Musique Gélatineuse’ provides dessert, yet while its tones are as rich as the title suggests, the precise production means any excess fat is kept clinically trimmed.

The debut EP from Dublin-born Berliner Grün Glas opens with a buzz, an inhalation, and a distorted, shivering gasp. Of pleasure? Of anticipation? Of mild ‘oh my god that’s a lot stronger than I thought it would be’ drug panic? Who knows, but all three responses make sense in the context of what follows.

The fizzing title track provides an immediate rush, its intoxicating hook and crisp beats recalling Plaid at their most awkwardly funky. ‘Pulver’ injects a bit of oxygen into the mix, raising the mood with the sort of melodious electronica that Bonobo fills big venues with these days, at the cost of a smidgen of intensity. Completing the triptych is ‘Spores’, a proper smasher dominated by guttural, subterranean bass and a belligerent bit of out-of-tune brassy synth. Can’t see this one wearing off any time soon.

Planet Mu continues a rude run of form with the latest release by Konx-Om-Pax, aka Glasgow artist, animator, audio manipulator and all-round showboater Tom Scholefield. If last year’s Caramel was a sprawling Moebius spaceship of an album, Refresher is much more nimble craft that contains some of Scholefield’s most accessible work to date.

The squelchy, fecund ‘Cascada’ is a brightly-coloured banger that gets you right in the temples, featuring enough glossy thrust and vocoder action to make you wonder whether Nathan Fake ever remixed Daft Punk. ‘Species With Amnesia’ alights on more familiar Konx-Om-Pax territory, with gloopy, brain-tickling strains of ambient psychedelia finding themselves strapped to an addictive digital chug. A couple of much-venerated names then arrive to wrap things up, with µ-Ziq adding a triumphant sheen to Caramel‘s title track before Huerco S. takes ‘Beatrice’s Visit’ (from the same album) on a thoughtful but somewhat ponderous eleven-minute tour. Ultimately, their versions of where Konx-Om-Pax has already been can’t compete with where he’s going now.

It’s fair to say I heard many mysterious sounds emerging from behind the bedroom door belonging to my old flatmate Mat Colegate, aka Mighty Lord Deathman, but none were quite as startling as those on I’m Having A Fight. Released on Liverpudlian tape label Pale Master, it’s a purposeful, unyielding EP with a surprisingly meditative quality behind its rough exterior, not least on opener ‘Hummingbirds At Work’, which layers moreish distortion over bloodshot 5am drum machine rhythms.

‘Fist For A Heart’ fiddles with the formula, warming up the drones while freezing the beats down to single figures kelvin, with a fluctuating lo-fi bassline periodically dancing through. The end result feels like a scrolling SNES beat em up set in the recesses of Colegate’s subconscious. ‘Enemies of Deathman’ then takes things to throb factor five with a sweltering mix that feels both dense and brittle simultaneously, building towards a moodily hypnotic hook that abruptly cuts out despite sounding like it could happily loop for hours. The brooding ‘Night Pox’ then takes us home, speeding down a deserted motorway in the dead of night with a murmuring madman in the driver’s seat. Again, the cut is brutal and disorientating. I’m Having A Fight has finished, and Mighty Lord Deathman is the victor.

One of the most striking Stones Throw signings for some time, Sudan Archives’ eponymous EP is one of those releases that immediately feels like a classic despite it being impressively hard to classify. As the moniker implies, violinist and vocalist Brittney Denise Parks is inspired by Sudanese fiddlers, but there are so many contrasting influences at play here that the end result doesn’t feel like it’s indebted to any particular place or time. Apart from possibly the moon, fifty years from now.

After the spiralling, soulful house of opening track ‘Paid’, we’re gifted with ‘Come Meh Way’, the most obvious introduction to SA’s world with its prominent, catchy strings and head-nodding beat. This is not a record that rests on its successes though, rarely waiting long to move onto the next idea, whether that be the kalimba-flecked ‘Time’ or the swooning triple-time groove of ‘Goldencity’. ‘Oatmeal’ is my personal favourite though, its frangible pizzicatos providing a complementary contrast with Parks’ velvety vocals and yearning violin.

Glad summer’s over? Suicideyear has a song for you; specifically ‘Summer Hate’, the glistening opening track that constitutes one of his Hate Songs, released on Glasgow’s LuckyMe in the middle of July. Not particularly fond of the other seasons either? Well there are tracks subtitled ‘Autumn Hate’, ‘Winter Hate’ and ‘Spring Hate’ here too. Temporal equality is key when it comes to Suicideyear’s rancorous calendar.

Twitching, chiming trap explorations are the order of the day here, with ‘Mosh Mosh (Julie’s Song)’ deftly combining fulsome bass and frantic snare rushes with airy production and Aphex-style harmonies, before disintegrating into a dreamlike second half. Even on the claustrophobic ‘Flood (Autumn Hate)’ and subwoofer-melting ‘Alert (Winter Hate)’ there are moments of emotional release; less so on grinding ear-scraper ‘Spent Days Watching Horses Die’ (unless you count its amusingly grim title). ‘Lagniappe (Spring Hate)’ then ends proceedings on a slightly tart but (sort of) appropriate note of renewal, proving once again that despite its title, there’s a lot to love about Hate Songs.

Hepped up on 'Goofballs' - an interview with Eric Copeland 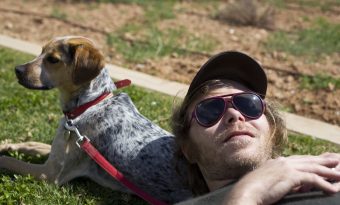 We catch up with Black Dice and Terrestrial Tones' Eric Copeland as he prepares to release 'Goofballs', his latest solo album on DFA Records...
Read More