Mica ‘Micachu’ Levi’s last studio album with The Shapes was easily one of the best records of 2009. Bewilderingly left off that year’s Mercury Music Prize short-list, the band’s invigoratingly inventive approach to pop music still won them wide critical acclaim, and left fans ravenous for more.

There have been slim pickings for those fans since though. Last year’s “Chopped & Screwed” LP, a live collaboration with the London Sinfonietta, was a curious, intermittently engaging album that nevertheless felt like something of a stop-gap. Micachu herself seemed to agree, cheekily dismissing it as “a load of old bollocks” and admitting she “felt like a chancer”.

Perhaps she was just trying to pre-empt any accusations of precociousness after having been appointed the South Bank Centre’s youngest ever artist-in-residence, as it’s hard to believe she didn’t feel any pride for the source material. Indeed, the best track from that album, “Low Dogg”, is put through the blender and included here (and retains the buzz of spinning blades from the process).

An insane re-imagining of an old track is about as unoriginal as the album gets. “OK” is all crossed-wires and lurching insistence, “Fall” fills your ears with woozy ketamine jazz, while the bizarre phone calls that intersect “Glamour” could only make sense on an album this insane. The videos the band have made for every track only add to the offbeat cartoonishness.

Naturally, it’ll be almost unlistenable to people of a certain sensitive disposition (i.e. those who aren’t keen on work tools and vacuum cleaners being used as instruments), and the songs aren’t as instantly catchy as some of the classics on “Jewellery”. Yet, though “Never” still sounds very similar to that album, it also still sounds extremely fresh. Since they appeared in 2009, no one has made an album that sounds at all like Micachu & The Shapes, and it’s unlikely any other band ever will. So they’d better keep on bloody making them. 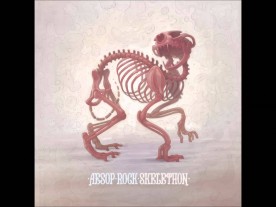 The demise of Def Jux and diminishing returns from the likes of Stones Throw and Anticon has caused the alternative hip-hop scene in the U.S.A. to become a little barren of late. While mainstream hiphop has gone from strength to strength sales-wise, becoming this generation's equivalent of 1970s stadium rock, there's been little on the sidelines to get excited about. Indeed, as soon as anything even mildly interesting appears, it's subject to unmatchable levels of hype (see: everything Odd Future related). This is a good time for Aesop Rock to reappear. Cruelly cast adrift by the indefinite Def Jux hiatus, this is his first record since 2007's underrated 'None Shall Pass', and continues the extremely slow but steadily upwards trajectory since 2003's musical low point 'Bazooka Tooth'. The opening two tracks, the sinister 'Leisureforce' and the driving 'ZZZ Top', constitute the perfect start, with a rhythmical dexterity that perfectly suits the rapper's frequently impenetrable lyrics. Indeed, that's often been a key criticism of Aesop Rock – while classic tracks like 'No Regrets' have shown he can write a narrative rap as good as any old-school MC, his normal modus operandi is to deliver scattershot, meandering rhymes that jump from subject to seemingly unrelated subject. He's like a rap James Joyce! Yet here he's helpfully anticipated the haters by filming a series of interviews explaining the genesis of each track. Not everything needs spelling out though. From the title and cover, then though a myriad of morbid images that turn up like crushed skulls in a tilled battlefield, death is a recurrent obsession (partly inspired by the passing of Camu Tao in 2008). Yet this is not a gloomy album; in fact the main feeling is a renewed enthusiasm for the form. From the Kimya Dawson appearance on 'Crows 1' to the haircut-hawkster halfway through 'Racing Stripes', moments of invention are plentiful. Then there's closing track 'Gopher Guts', the most painfully personal thing he's produced since 'One Of Four (Thank You)', a hidden track on the classic 'Daylight' EP. It's full of self-loathing and despair, and would be uncomfortable to listen to if it wasn't so darkly captivating. Aesop's fables may not always have a moral, but damn we've missed him telling them.
Read More