Imagine if Lewis Carroll’s Mad Hatter gave up dining with rodents in order to learn the violin, eschewing the moronic Dormouse and that berk The Mad March Hare in order to hunker down over a laptop, meticulously splicing together acoustic recordings with digital sorcery. Well, that’s loosely – very, very loosely – what you get with French electronica wizard Chapelier Fou (his name translates as “Mad Hatter”, see?). A prodigous violinist who entered the Conservatoire de Metz aged six, Louis Warynski (for it is he) claims that studying classical music “became unbearable” by the time he was sixteen, and started playing in bands instead.

The music he makes now, however, draws deeply upon his classical education. Warynski’s latest album, “Invisible” (released this month in the UK) is an exquisite mix of skilled musicianship and deft production, and may well be the most harmonically satisfying electronic album of the year. His varied musical influences mean that the echo of composers such as Yann Tiersen and Philip Glass can be heard alongside sounds more redolent of Plaid or Frog Pocket, which makes for a beguiling mix on nimble numbers like “L’eau Qui Dort”. The rapid-fire editing on the astonishing “Protest”, which kicks in after a lengthy orchestral build-up, is finely judged and perfectly executed, while the rest of the album is restlessly inventive and relentlessly gorgeous. Get yourself down the rabbit hole. 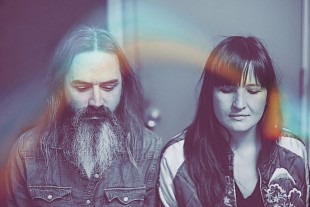 It's not often this slot features a frontman with a gigantic, greying beard that makes it look like he has a smoked badger hanging from his face. Not because we're beardist you understand, it's just that often the musicians we feature are too young to even manage a bum-fluff moustache, never mind Erik 'Ripley' Johnson's luxuriant facial furniture. Yet while Johnson has been knocking around for years, most commonly fronting the psychedelic workouts dished out by Wooden Shjips, some of you may not be aware of the mighty Moon Duo - the side-project he shares with keyboardist Sanae Yanada (who may or may not be his wife - anyone know for sure?). And you should be aware. For their second album, "Circles", is a cracker - in fact, if it wasn't for the genius of FlyLo over there it'd be our album of the week. At first, it may be hard to differentiate between Johnson's two outfits. Both specialise in loud, hypnotic riffs and snaking keyboards that orbit around driving rhythms, and both have a tendency to stretch these elements out to trance-inducing dimensions. Yet Moon Duo's sparser sound and slightly poppier sensibility are increasingly emerging from the shadow of the Shjips. Their first (brilliant) EPs were a startling statement of intent, adding a snarling edge to the tried-and-tested Wooden Shjips formula, but debut album "Mazes" sounded just a little too clean to provide a completely satisfying follow-up (although "When You Cut" remains an absolute peach, juicy and fuzzy in perfect proportions). With "Circles" it feels they've reached a comfortable equilibrium, with a slight boost in distortion playing off against some killer new tunes. "I Can See" is a bracing, powerful desert gale, while "Dance Pt. 3" provides an altogether heavier swirl that struts around like a drunken hells angel in an unfamiliar bar after one too many joints. Lead single "Sleepwalker", meanwhile, is about as accurate summation of Moon Duo's sound as they've released, all echoing vocals and searing guitar solos (plus it also boasts a fantastic video - see below). All this, and the whole thing is apparently based on an essay by transcendentalist writer Ralph Waldo Emerson. What more could you want? Just light up and let go...
Read More