Scott Walker’s metamorphosis from chart-bothering crooner into grizzled avant-gardist is one of the most remarkable turnarounds in modern music; Snoop Lion could rename himself Snoop Nightingale and start warbling operettas and it would only be slightly more surprising. If you’re familiar with Walker’s 2006 opus “The Drift”, you’ll know it’s possibly the most terrifying record released this century, a ball of harrowing strings, obfuscating lyrics and stomach-churning crescendos aided by the infamous use of a dead animal as a percussive instrument on ‘Clara’, a track about Benito Mussolini’s mistress.

Such a singular record is always going to be difficult to follow up, so what approach does Walker take on “Bish Bosch”? Well, largely, it’s more of the same. While opening track ‘See You Don’t Bump His Head’ does briefly feature an unexpectedly meaty metal riff on electric guitar, the defining characteristics are the high-pitched, dissonant strings and Walker’s mournful baritone uttering fantastically unsettling lyrics like, “While plucking feathers from a swan song / Spring might gently press its thumbs against your eyes”.

However, there’s a point during ‘Corps De Blah’, when the words “a sphincter’s tooting our tune” are accompanied by the sound of squeezed out farts, when you wonder whether Walker’s just taking the piss. As warped dogs bark, and horrendous noisy violins spew outwards like evil fireworks, you worry whether “Bish Bosch” is in danger of descending into parody. “Nothing clears a room like removing a brain,” he intones, although the chilling sound of a large knife slowly being sharpened puts this album a close second to amateur neurosurgery in the room-clearing stakes. Yet considering the subject matter, it all seems a little…predictable.

It’s when Walker departs from his usual tricks that your ears really prick up. Witness the brief samba breakdown during ‘Phrasing’, or the bass sax riff and subtle cowbell rhythms on ‘Epizootics!’, which is about as close as he’ll ever come to a funky groove. The ukelele coda to that track even sounds amusingly like Beirut, although preceeding lines like “Take that accidentally in the bollocks for a start” mean you’re never in danger of forgetting where you are.

The ridiculously-named ‘SDSS14+13B (Zercon, A Flagpole Sitter)’ forms the centrepiece of the album, which features some particularly vicious lyrical barbs during its twenty-plus minutes. “This is my job / I don’t come around and put out your red light when you work…If shit were music / you’d be a brass band,” are the words that open the track, with the vulgarity reaching an obscene peak with the line, “I’ve severed my reeking gonads / Fed them to your shrunken face”. Musically everything feels much deeper, grander and “Drift”-ier, and there’s even room for a beautiful bit of harmony about fifteen minutes in, although naturally it only lasts about thirty seconds and even then is distorted by what sounds like seventeen miniature horses clopping across it.

The best is perhaps saved for last. ‘The Day the “Conducator” Died (An Xmas Song)’ is a rare instance of Walker showing real restraint, seeing him wearily contemplate a banal personality quiz with resigned moroseness. It’s the only track where he plays all the instruments himself, and my, does he play them well. It’s not particularly Christmassy of course, save the odd sleigh bell and an absurd xylophone rendition of ‘Jingle Bells’ at the end, but it’s a surprisingly fitting and functional ending to a wilfully disjointed album.

That’s the thing. Although there are moments were you suspect Walker is just playing around, chaotically tossing depraved ideas about to see what he can get away with, it’s a blessing that he’s created a niche which gives him the freedom to do so. No one else could’ve made this record, or even come close. Like William Burroughs, he’s created a bizarre, disturbing world all of his own, and while you wouldn’t want to stay there (unless you’re some sort of psychopath) it’s a fascinating place to visit. “Bish Bosch” may be flawed, but it’s also awe-inspiring. And what would you rather, a flawed Scott Walker album or a flawless Kooks one? Exactly. 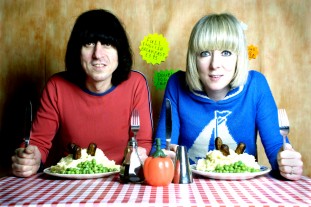 Ways in which songs by The Lovely Eggs differ from actual lovely eggs: they're crap in omelettes, weren't laid by hens and (probably) won't give you salmonella. Ways in which they are similar: they're tricky to poach, can potentially be very messy and come in large batches (containing the occasional stinker). Also, while they appear solid, there's a brittle fragility to them too. The band, guitarist wife Holly Ross and drummer husband David Blackwell, have claimed that "Wildlife" is their most accessible album yet, although its formula of tainting twee ditties with abrasive tones means they remain a strictly cult concern. No bad thing, and any cult revolving around the duo would be much more inviting than say, Jim Jones' People's Temple (there'd always be a nice pot of tea brewing, and it probably wouldn't contain cyanide). "Wildlife", which is the band's third album, certainly makes a compelling manifesto. It's enough to convert Gruff "Super Furry Animal" Rhys at least, who steps in to produce 'Allergies', swaddling the raucous, ramshackle opener in several layers of sitar. The track clocks in at almost four minutes, which is fairly epic by Lovely Eggs' standards; the next track, 'Don't Patent That Shoe', lasts less than a minute, which turns out to be more than enough time to provide a noisily nostalgic burst of what Britpop felt like before it lost its sense of humour. Not all the shorter tracks are as successful, mind - 'The Undertone' largely consists of pointless shrieking and the build-up of 'William Tell' falters on a crap punchline - but the band's judgement of an idea's longevity is generally spot on. It's not all surface noise either. 'I Just Want Someone To Fall In Love With' recalls the ragged romanticism of The Moldy Peaches, while the swaggering riffs and sweet harmonies on 'Lee Mellon's Teeth' combine to produce an unexpected poignancy. They've previously highlighted countercultural American author Richard Brautigan as an influence, and 'I Am' exhibits a similarly limber knack with metaphor: "I'm the last book in a library sale...I'm the silence in an interview', laments a lonely Ross. Elsewhere they use their lyrical talent to construct the feeling of a pre-internet world, before Twitter, HypeMachine and Instagram, when indie really was indie: fags, shit furniture, broken biscuits, rain and boredom. Songs like 'Please Let Me Come Mooch Around Your House' manage to imbue the mundane with possibility. Indeed, the band were formed when the pair were stuck in a Parisian flat with no TV or radio - the lack of instant entertainment forced them to make their own. Even the more twee moments generally avoid being irritating: see the distorted children's TV theme of 'Green Beans' (complete with unexpected rap section) or 'Cigarettes', a dishevelled northern indie version of 'Ten Green Bottles'. While the easy-going/ear-splitting dynamic runs the risk of getting a little worn by the time 'Just Won't Do it' rolls in, it's impossible to make an omelette without cracking a few eggs (sorry). It's also impossible not to be charmed by "Wildlife". Ross describes their music as "laughing in the face of the shitness of life". We say having The Lovely Eggs in your life makes it a bit less shit in the first place.
Read More