The demise of Def Jux and diminishing returns from the likes of Stones Throw and Anticon has caused the alternative hip-hop scene in the U.S.A. to become a little barren of late. While mainstream hiphop has gone from strength to strength sales-wise, becoming this generation’s equivalent of 1970s stadium rock, there’s been little on the sidelines to get excited about. Indeed, as soon as anything even mildly interesting appears, it’s subject to unmatchable levels of hype (see: everything Odd Future related).

This is a good time for Aesop Rock to reappear. Cruelly cast adrift by the indefinite Def Jux hiatus, this is his first record since 2007’s underrated ‘None Shall Pass’, and continues the extremely slow but steadily upwards trajectory since 2003’s musical low point ‘Bazooka Tooth’.

The opening two tracks, the sinister ‘Leisureforce’ and the driving ‘ZZZ Top’, constitute the perfect start, with a rhythmical dexterity that perfectly suits the rapper’s frequently impenetrable lyrics.

Indeed, that’s often been a key criticism of Aesop Rock – while classic tracks like ‘No Regrets’ have shown he can write a narrative rap as good as any old-school MC, his normal modus operandi is to deliver scattershot, meandering rhymes that jump from subject to seemingly unrelated subject. He’s like a rap James Joyce! Yet here he’s helpfully anticipated the haters by filming a series of interviews explaining the genesis of each track.

Not everything needs spelling out though. From the title and cover, then though a myriad of morbid images that turn up like crushed skulls in a tilled battlefield, death is a recurrent obsession (partly inspired by the passing of Camu Tao in 2008). Yet this is not a gloomy album; in fact the main feeling is a renewed enthusiasm for the form. From the Kimya Dawson appearance on ‘Crows 1’ to the haircut-hawkster halfway through ‘Racing Stripes’, moments of invention are plentiful.

Then there’s closing track ‘Gopher Guts’, the most painfully personal thing he’s produced since ‘One Of Four (Thank You)’, a hidden track on the classic ‘Daylight’ EP. It’s full of self-loathing and despair, and would be uncomfortable to listen to if it wasn’t so darkly captivating. Aesop’s fables may not always have a moral, but damn we’ve missed him telling them. 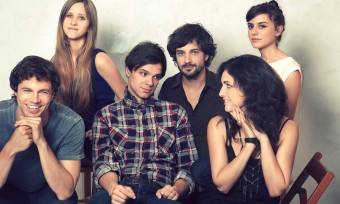 Dirty Projectors are masters of splitting opinion, seeming to irritate almost as many as they captivate. With Björk firmly on the “pro-DPz” side (she worked with members of the band on 2010's 'Mount Wittenberg Orca' album), you know they're unlikely to produce anything too conventional. Yet for some, their very quirkiness is the main deterrent. It's possible that the naysayers may yet be won over by their new album, 'Swing Low Magellan', which is probably their most straightforward to date. Are Dirty Projectors cleaning up? Of course not – there are still as many twists and turns on this album as on a suggested Googlemap route through the Welsh valleys. From the almost comically exaggerated humming n' handclaps intro to “Offspring Are Blank” (which contains, in high contrast, a chorus more akin to something from Guitar Hero) to the squashed chords and table-tapping rhythms of “See What She Seeing”, there's enough going on underneath the near-constant vocal harmonies to keep even the casual listener interested. That's not to say that those who've always found Dirty Projectors annoying won't continue to do so. The singing sometimes descends into caricature, while the occasional zaniness of the backing tracks can lurch away from adding character into the realm of simply distracting. Still, the record is unlikely to disappoint fans and is catchy enough to potentionally attract more radio airtime than ever before. Swing low, sweet Projectors.
Read More