You get the sense that if this, Melody Prochet’s debut album, had come out a couple of years ago when everyone was blissfully basking in Beach House’s ‘Teen Dream’ album, it’d currently be being talked up as an album of the year. However, the softer sounds of dreampop, chillwave, lushcore, bubblebuzz, snoregasm or whatever we were calling it aren’t as prevalent now. That may mean this album doesn’t get the audience it probably deserves, or it may mean it escapes terminal association with a dying genre – time will tell. Taking it out of context completely makes it easier to judge. It’s a nice album. And I mean that in the nicest possible way. Honestly I do.

In terms of audience, the fact that Tame Impala’s Kevin Parker produced the album and played much of it means that it has still garnered a fair amount of attention. It certainly bears his easy-burning brand of sunny psychedelia – the textures conjured from his Perth studio are so warm you can almost feel them. However, it’s a less sunny band that the album more often recalls: Broadcast. Prochet picks out very similar melodic lines to the ones that the late Trish Keenan used to spin, making it tempting to simply paint Prochet as a gallic incarnation of the much-mourned singer. However, the main difference concerns tone – whereas Keenan’s vocals were always cast with an icy clarity, Prochet is brighter and breathier. Slightly less distinctive, admittedly, but it works well with the music.

And some of the music is superb. The album begins with the beautiful, slightly melancholic arpeggios of “I Follow You”, with the dreamy atmosphere only disturbed by a satisfyingly unexpected guttural guitar solo at the end. “Crystallized” then employs a well-judged, flanged guitar line to enhance the ambience, drifting past a condensed electronic beat like a mushroom-shaped cloud (of the psylocibin rather than atomic variety). Meanwhile, “Some Time Alone, Alone” could almost be a Tame Impala number, what with it being immaculately put together and centered on the need for solitude.

The quirky “Quand Vas Tu Rentrer?” stands out by being in 5/4 time and one of the only songs sung in French, but the quality does drop a little afterwards, with the seaside synths of “Mount Hopeless” coming across a bit Groove Armada-y. Meanwhile, the experimental instrumental “Is That What You Said” caused two women in the room I was playing it in to exclaim “that’s horrible”, adding a mischievous squirt of citrus to the almost relentlessly honeyed tones.

Things recover grandly for the closing song, “Be Nice To Your Kids”, which features samples of a child happily babbling over some charming descending scales. It’s a lovely way to wrap up a lovely album. In fact, the only problem with it is that words with bland, beige associations like lovely and nice are actually the most fitting ones to describe it. Is that a bad thing? Sometimes. But not here. 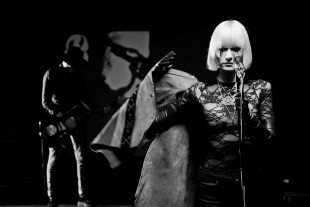 The phrase "black music" always reminds me of a seemingly endless car journey to see Arsenal play Middlesbrough at Old Trafford. The chubby, red-faced man in the passenger seat kept on complaining about the driver playing "black music", by which he meant anything from Prince to De La Soul, which was sadly keeping in character with an earlier observation he'd made of the area in London where my Dad and I lived: "it's full of "them" round here innit". By the time we got to the stadium I was so drained that being almost beaten up by a Boro fan for spilling his pint came as a much-needed pick-me-up. It's doubtful even listeners as bigoted as him would find much objectionable about the "Black Music" offered by Dark Horses , though no doubt he'd be grateful that the title was a reference to the album's tone rather than skin colour. It fits in with the band's fashion sense too: biker jackets and leathers make up most of the Dark Horses uniform, an attempt to create a shadowy, sinister, outcast atmosphere that sits smouldering underneath the pier of their stomping ground, Brighton. It'd all come off a bit, well, Halloween-y if the music didn't back it up. Fortunately, it really does. Right from the opening track "Rose", which features little more than an organ drone, a Sleepy Sun-style fuzzy bassline and Swedish singer Lisa Elle's vocal exhortations. A lash of sitar gives everything a slightly Death In Vegas vibe (Richard Fearless, it turns out, produced the record), before a tinny drum machine rhythm suddenly kicks in right at the end. You expect it to segue smoothly into the next song...but no. It's one of many small surprises that crop up over the next thirteen tracks. The second track is "Radio" which, fittingly, is actually rather radio-friendly, sounding like Mazzy Star but with a chorus catchier than most of Hope Sandoval's. Not quite as catchy as the one that straddles "Alone" though. Rapid-fire hi-hat rhythms and languid synths build up to it, and a striking organ chord pattern then helps it blow the song sky-high. "Boxing Day" ebbs and flows in a similarly satisfying way, with Elle's vocals at their best on a synth-propelled chorus that for some reason brings to mind Donna Summer's "I Feel Love" despite not sounding anything like it. The rest of the album doesn't quite live up to an astonishingly strong opening quartet of tracks, but it still maintains a high standard. The delay-spattered guitars and vocals on "No Dice" sound like they're ringing out from the top of a Black Mountain, while "Traps" envisions a Stereolab practice session after a round of day-old opium tea. The somewhat more folksy "Sanningen On Mig" takes things deep into the woods and features a dash of musical saw, while "S.U.N." simply sounds baked in all the best senses of the word. A quirky cover of Talking Heads' "Road To Nowhere" stops things from getting too bogged down, but while "Anna Minor" attempts to give things another jolt by cranking up the amps, in all honesty it's not as interesting. Instrumental closing track "The Archer" is a bit of a non-event and means the album kind of finishes without you realising it. Still, that doesn't matter much as chances are you'll be sticking it straight back on again anyway. Is "Black Music" good enough to make them dark horses for next year's Mercury Prize? Considering the strength of this year's field, it's almost enough to make them racing certainties...
Read More