2000 was a great year for music, witnessing career highs from PJ Harvey, Queens of the Stone Age, Radiohead, Godspeed You! Black Emperor, Two Lone Swordsmen, Grandaddy, Smog and Primal Scream, plus exceptional debuts from Broadcast, Badly Drawn Boy, Kelis and, yes, Clinic. In probably contained enough musical enjoyment for ten years never mind one, which was a relief as the decade that followed didn’t quite deliver to the same standard.

That’s kind of the case for Clinic’s career too. That album, ‘Internal Wrangler’, was an instant classic, raucous, inventive, psychedelic, heartwarming, sinister and sincere in equal measure, easily fulfilling the promise shown by their excellently-named debut single, “IPC Subeditors Dictate Our Youth”. It ticked every box, then invented a few new ones and ticked them too. The only problem was, it was near-impossible to follow up.

“Walking With Thee” was an excellent attempt, and kept their profile high enough to get them on Letterman, while third album “Winchester Cathedral” had its moments too. However, a law of diminishing returns was in place, and subsequent albums have simply produced the same stuff but less successfully. 2010’s “Bubblegum” did try something slightly new, flirting with soft, poppy psychedelics, but it didn’t really work.

Their new album also tries something a bit different, and the good news is that this time it really works. “Free Reign” still sounds like Clinic of course, but it’s a stripped down, sparser version that distills everything about them into one clear, potent measure. Opening track ‘Misty’ sets the scene with some Suicide-style drum machine rhythms propping up what sounds like one of those big old ORLA keyboards, shuddering in the fog. Singer Ade Blackburn picks out a typically moody melody, and it quickly becomes clear that this is vintage Clinic.

Unfortunately, the next couple of tracks threaten to wreck the proposition. ‘See Saw’ suffers from overdone phasers and some seemingly intentional sloppy musicianship, although a good chorus stops it from descending into just a shabby Residents imitation, while ‘Seamless Boogie Woogie, BBC2 10pm (rpt)’ is unfortunately nowhere near as good as its title. ‘Cosmic Radiation’ gets things back on track though. It sounds like a Stereolab title and its spaced-out jazziness is a little like a Stereolab song, with Blackburn’s bizarre vocals making it sound like he’s been exposed to some sort of radiation himself.

There’s a surprise appearance by Daniel Lopatin, aka Oneohtrix Point Never, on mixing duties for ‘Miss You’, and he subtly alters the sound of the song as it progresses, before suddenly opening up with a section that sounds a little like ‘Walk On The Wild Side’. It’s ace. ‘King Kong’ is another corker, like Silver Apples watching an episode of Funny Bones, with a bizarre juddering edit halfway through to stop you getting too comfortable.

Lopatin returns on the krautrock workout of ‘You’, before ‘Sun And The Moon’ takes things into the statosphere, sounding like the band are trying to channel Sun Ra. Percussive elements stagger in and out of time, strange electronic hisses occur without warning and the clarinet produces clear tones as a woman laughs maniacally in the background, while all the while a keyboard punches the same chord over and over and over.

You imagine the looser elements are what inspired the title, but it turns out that’s an ironic reference to financial restraints, with Blackburn admitting, “we called the album Free Reign because being in a band, at the moment, it feels like you have anything but”. He’s also expressed worries that people won’t give the album the attention they once would have. “I suppose to be up to your seventh album, people often think, ‘Well, I know all I need to know about this band.’ So they might not investigate it as much as they would have done in the past”. They’d be fools if they didn’t – this is Clinic’s best album in a decade. It’s good to have them, properly, back. 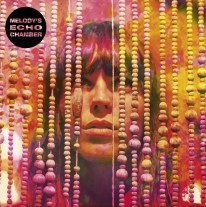 You get the sense that if this, Melody Prochet's debut album, had come out a couple of years ago when everyone was blissfully basking in Beach House's 'Teen Dream' album, it'd currently be being talked up as an album of the year. However, the softer sounds of dreampop, chillwave, lushcore, bubblebuzz, snoregasm or whatever we were calling it aren't as prevalent now. That may mean this album doesn't get the audience it probably deserves, or it may mean it escapes terminal association with a dying genre - time will tell. Taking it out of context completely makes it easier to judge. It's a nice album. And I mean that in the nicest possible way. Honestly I do. In terms of audience, the fact that Tame Impala's Kevin Parker produced the album and played much of it means that it has still garnered a fair amount of attention. It certainly bears his easy-burning brand of sunny psychedelia - the textures conjured from his Perth studio are so warm you can almost feel them. However, it's a less sunny band that the album more often recalls: Broadcast. Prochet picks out very similar melodic lines to the ones that the late Trish Keenan used to spin, making it tempting to simply paint Prochet as a gallic incarnation of the much-mourned singer. However, the main difference concerns tone - whereas Keenan's vocals were always cast with an icy clarity, Prochet is brighter and breathier. Slightly less distinctive, admittedly, but it works well with the music. And some of the music is superb. The album begins with the beautiful, slightly melancholic arpeggios of "I Follow You", with the dreamy atmosphere only disturbed by a satisfyingly unexpected guttural guitar solo at the end. "Crystallized" then employs a well-judged, flanged guitar line to enhance the ambience, drifting past a condensed electronic beat like a mushroom-shaped cloud (of the psylocibin rather than atomic variety). Meanwhile, "Some Time Alone, Alone" could almost be a Tame Impala number, what with it being immaculately put together and centered on the need for solitude. The quirky "Quand Vas Tu Rentrer?" stands out by being in 5/4 time and one of the only songs sung in French, but the quality does drop a little afterwards, with the seaside synths of "Mount Hopeless" coming across a bit Groove Armada-y. Meanwhile, the experimental instrumental "Is That What You Said" caused two women in the room I was playing it in to exclaim “that's horrible”, adding a mischievous squirt of citrus to the almost relentlessly honeyed tones. Things recover grandly for the closing song, "Be Nice To Your Kids", which features samples of a child happily babbling over some charming descending scales. It's a lovely way to wrap up a lovely album. In fact, the only problem with it is that words with bland, beige associations like lovely and nice are actually the most fitting ones to describe it. Is that a bad thing? Sometimes. But not here.
Read More