‘Persistent Malaise’ could describe a lot of things. The Liberal Democrats. Mark Lawrenson. A good brand name for my diet, if you condensed everything I ate and put it into jars. Yet ironically it doesn’t describe the debut album of Cold Pumas, even though that’s what they’ve called the bloody thing.

Perhaps it’s more a description of the time spent making it. After all, they’ve been on the radar for a few years now – did a long period of ennui hinder its creation? It doesn’t really matter. The important thing is that the music of Cold Pumas is more likely to snap you out of a malaise than put you into one.

Musically, their clashing guitars, droning dissonance and muddied vocals produce a sound uncannily similar to Canadian art-rockers Women (indeed, they launched a split single with them a couple of years back). Usually sounding so like another band is a bit off-putting, but in this case it achieves the opposite effect, for two reasons: 1) Women traigically lost guitarist Chris Reimer earlier this year (and were already on hiatus before that) and both man and music are sadly missed; and 2) Women were fucking brilliant, so sounding a lot like them really isn’t a problem.

Standout tracks like “A Versatile Gift” and “Sherry Island” show an expansive attitude towards song-writing, favouring patiently-developed journeys over succinct statements. As a result, the music seems to penetrate deeper into your head, peeling back the papered cracks and snaking around shadowy corners, pervasive and affecting, right up until the triumphantly distorted “Vanishing Point” sees the record out. It might have taken a while for their long-playing vaccine to get here, but it confirms that Cold Pumas are the cure, not the cause.

We Have A Ghost 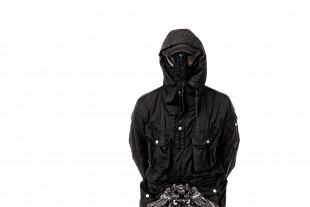 Some people are just made for Halloween, and We Have A Ghost is one of those people. He launched his debut self-titled album online for Halloween last year, and waited until this Halloween to finally give it a physical release (the lauch party took place, unsurprisingly, in a mortuary - a good six other albums are either in production or already up on his Soundcloud). He only ever appears in a customised jacket with an inbuilt face-obscuring mask, making him appear creepily redolent of Paddy Considine's revenge-seeker in Dead Man's Shoes, and is obsessed with spectres and hauntings. We're not just talking about ghosts in the gnashing and wailing sense though. He recognises that humans are troubled by much more than mere spirits, which he told Alteria Motives is how he got his name: "I realized I was haunted by the notion I was capable of doing more with my life. WE HAVE A GHOST represents anything haunting you. I believe it's a universal truth - we are all haunted by something". The dead relative you never got the chance to say goodbye to, the girl you saw weeping but never asked if she was OK, last night's dodgy kebab...you can put anything that troubles you into thoughtful, electronic pieces like 'Meadow' or 'It Is What It Is' and let them dwell there, floating in the ether. Not that all his tracks are low key though. 'The Secret' employs rumbling snare rolls and cymbal crashes over a simple but effective piano motif, topping it off with a squalling synth solo, while 'Computerrok' drags the horror through the disco doors and butchers it on the dancefloor. However, like Holy Other, Balam Acab and other camera-shy bedroom artists, the tricky question is how his music can be transformed into a live environment without compromising his anonymity. While he hasn't figured that out completely yet, there's one element he has decided on: "I would like to incorporate certain traditions from the Ghost Festivals - like reserving the front row for ancestors and the audiences departed loved ones". For some, the Day of the Dead lasts all year long...
Read More