It’s bizarre to think that this is The Gaslamp Killer‘s debut album. The hirsute beatsmith seems to have been around for donkey’s years – he’s a founding member of LA’s influential Low End Theory club for pity’s sake, yet peers such as Flying Lotus and Samiyam are already working on third albums while GK has, until now, contented himself with putting out occasional EPs at irregular intervals.

Of course, in a way he has already released an album: his old pal Gonjasufi’s debut was put together almost entirely by ol’ Gaslamp. While the LP did contain a FlyLo joint alongside a handful from Mainframe, the mixture of dusty, gritty breaks, mystical eastern samples and straight up psychedelia bore the undeniable DNA of one man: it wasn’t called “A Sufi A Killer” for nothing, the record was practically a duet.

So what of his debut proper? Facetiously titled “Breakthrough”, you half-expect it to be a meticulously-curated collection of all the best tracks he’d presumably squirrelled away over the years. The fact that it’s actually an unbalanced, scattershot, deranged record full of unexpected twists and bizarre ideas is, in retrospect, much more fitting.

The album begins with an intro so bizarre you may as well just instruct listeners to inhale a whippet of laughing gas before pressing play, and the way it suddenly switches into the Dr. Dre-esque string samples of “Veins”, which features crackly, soulful vocals from Gonjasufi himself, is predictably unpredictable. At times it almost feels like an album constructed entirely out of interludes, with less than a third of the tracks breaching the three minute mark. Also, though featuring a whole host of collaborators, only Mr. Sufi’s vocal contributions are obviously his, while the rest is left to guesswork. Are those Shigeto’s rapid-fire drums on the droney “Keep It Simple, Stupid”? Whose wibbly synths are those on “Holy Mt Washington”, Gaslamp’s or Computer Jay’s? The mystery is part of the fun.

There’s a lot of fun to be had on this album in fact, and not just on the snigger-inducing “Fuck”. From the brutal synths and messy rhythms of “Impulse”, to the relatively lengthy “Nissim”, which snaps from an extended sitar solo into the album’s jauntiest track with a perfect drop. Elsewhere, “Dead Vets” provides one of the best organ n’ breaks exhibitions since DJ Shadow’s “Organ Donor”, and the farty synths of “Peasants, Cripples and Retards” will probably shake the eyebrows off your face if you have your headphones too loud. On the other side of the spectrum, “Apparitions” manages to update the smoky Ethiopiques sound of Mulatu Astatqé with impressive casualness.

While there’s nothing here that matches the catchiness of, say, “Turk Mex” from the “MY Troubled Mind” EP, the disjointed, mercurial shiftiness of “Breakthrough” provides a pretty perfect portrait of its creator. This is a man who got his nickname, remember, from the fact that his experimental Djing often killed parties in his former stomping ground, the Gaslamp district of San Diego. “I’m not making party music,” he says, “I’m making head music”. It’s a cliché of course, but as a moody violin motif rounds off “7 Years of Bad Luck for Fun”, the album’s closing track, you’re left thinking one thing – that was one hell of a trip… 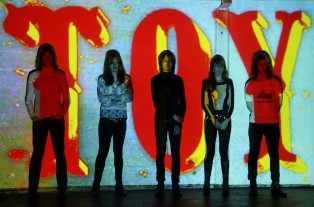 It's no great surprise to learn that TOY are pals of The Horrors - Faris Badwan and friends are the first band that spring to mind upon listening to this, the band's self-titled debut album. Which is odd, because The Horrors are known as the band that always make you think of other bands. Does that make TOY the ultimate derivative band? Thankfully not, as despite their influences being writ so large you could stack them on top of each other and recreate Stonehenge, they're talented enough songwriters to be considered in their own right. That isn't immediately apparent though. Putting aside preconceptions aroused by three of the party previously being in the deeply uninspiring Joe Lean & The Jing Jang Jong, opening track, "Colours Running Out", still comes across as a wee bit unimaginative and underwhelming, with only the mewling keyboards providing much interest. While the poppy shoegaze of "The Reason Why" lifts the mood slightly, things still sound slightly lethargic until the extended instrumental close of "Dead And Gone" takes the volume up several notches (although even then you can't help noticing it sounds like a less interesting version of "Bird Is Broke (Won't Sing)" by Indian Jewelry). Fortunately, if the first three tracks are ineffectual swipes to the forelocks, the fourth slams you right in the solar plexus. A classic break-up song full of bitterness and regret, the lyrics to "Lose My Way" - "You can't bring yourself to look me in the eye / When we say goodbye" - all ring painfully true, and the tune is absurdly catchy. The standard is maintained with "Drifting Deeper", an indie take on Krautrock that's better than the usual indie take on Krautrock, sounding a bit like The Breeders tag-teaming with Siinai (although to follow that with another motorik track called "Motoring" has to be tongue in cheek, right?). After the schamltzy and forgettable "Heart Skips A Beat", the album peaks with the mighty "Strange", a gothed-up number with a huge instrumental chorus that looms over you like a vampire, made even more striking by an effectively understated verse. While the rest of the album can't quite keep up that intensity, the delicate "Omni" is a lovely little interlude, and the breackneck tempo of closer "Kopter" stops the energy from sapping (which is lucky as it's almost ten minutes long). In terms of comparison to their mates in The Horrors, the album recalls the sonic template of "Primary Colours", but does so in a sweeter, less affected way. While Tom Dougall's vocals may not be blessed with excessive personality, they project more honesty than Badwan's imitative posturing, and Alejandra Diez's keyboards glaze the album like a layer of honey on a hot ham. Like most decent debut albums, "TOY" speaks much about the band's potential: with a bit of luck, a good album here will begat a great one next time around.
Read More