At first listen, “Until The Quiet Comes” feels like a simulataneous step both forwards and backwards. Backwards because, in comparison to 2010’s “Cosmogramma”, it’s a fairly restrained affair which never lets his more experimental tendencies off the leash. Forwards because, while it doesn’t depart stylistically from the rest of his back catalogue, it’s probably his most cohesive and evocative record yet.

The album’s title is an appropriate one, as this is as consistently gentle as Flying Lotus gets, with the delicate chimes of “All In” setting the tone early on. “I worked on this joint till the last day”, admitted FlyLo on Twitter, and you can tell – the attention to detail is breathtaking. However, as pretty as the first portion of the album is, it takes a while to really get going. From Niki Randa’s dusty vocals on “Getting There” to the dreamy tropical vibes of “Heave(n)”, everything sounds nice but also slightly inconsequential – and if “Tiny Torches” is FlyLo’s idea of a “mischievous song”, then he must have a dull idea of mischief.

Yet whether the quality of the album increases, or the vibe starts seeping into your brain, things soon begin to improve. “Sultan’s Request” liberally douses some loud, lumbering synths with sparklier sounds, while “See Thru To U”, a collaboration with Erykah Badu, Dorian Concept and Thundercat, is a velvety high point (thankfully its working title of “See Thru To Titties Glasses” was abandoned). The title track, also originally written for Badu, does a good job of encapsulating the album as a whole, managing to be both subtly smooth and wilfully complex at the same time.

“DMT Song”, featuring a sweetly sung lyric by Thundercat detailing his experience with the mindbending hallucinogen, has an authentically far-out seventies vibe, recalling spiritual jazz combo New Life Trio. “Nightcaller” also features Thundercat (he and FlyLo enjoy a “psychic” connection apparently), and is one of the most strident songs on the album, with another Brainfeeder bro, Samiyam, joining the party for a squelchy synth section.

Thom Yorke is the next collaborator to drop in, though his voice is barely recognisable as it slices in and out of the Broadcast-style intro and gloopy percussion of “Electric Candyman”. While it’s not a patch on his last spot with FlyLo, on “…And The World Laughs With You”, there’s something refreshing about a Thom Yorke appearance where his singing isn’t the centre of attention (“I’m not afraid of his voice”, opines the author). Yorke’s bandmate Jonny Greenwood’s soundtrack work is apparently half the inspiration for “Hunger”, while the other half is attributed to a magic mushroom trip at the hilariously-named Integratron; it certainly has the right combination of beauty, confusion, ecstasy and lethargy to evoke that, flowing into a sumptuous second movement. Next, Laura Darlington provides the album’s finest vocal cut on “Phantasm”, although FlyLo has a bash himself on “Me Yesterday // Corded”. While his singing’s not the best in comparison, the song grows purposefully, producing some superb basslines and lashings of squashed synth.

While “Cosmogramma” felt like a thousand ideas exploding in different directions, like a big but badly organised firework display, “Until The Quiet Comes” is a calmer, more finely orchestrated collection of tracks. It may not rise as high or descend as low, but it feels deeper in every direction. Personally, I liked “Cosmogramma” less every time I heard it. This record is more similar to his earlier releases, which rewarded repeated listens. And there will be many repeated listens here. Oh yes.

Woodpecker Wooliams - The Bird School Of Being Human 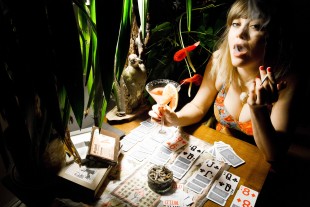 The first thing people have said when I've stuck this album on is always the same: "is this a Joanna Newsom album I haven't heard before?". It soon becomes apparent that it really, really isn't. For a start, the lyrics. Woodpecker Wooliams (or Gemma Williams, as she (probably) signs her cheques) may have anthropomorphic tendencies in her writing - every song on the album is named after a bird, with characters alternating between human and avian attributes - but this is no "Monkey & Bear" malarkey. Opening track "Red Kite" certainly sounds sweet, with its softly plucked harp and background birdsong, but the lyrics tell a much less pleasant story. It begins with the protagonist browsing Facebook and suddenly seeing a photo of an ex in familar clothing: so far, so universal, right? Oh no, wait, it's, "the very same thing I've been wearing since our last night...when you smashed my face in". Ah. Shit. I honestly can't remember the last time I heard a piece of music that contained such an unexpectedly jarring line. It goes on, and gets worse: "I've had a rash on my face where you spat there for three months now / It just won't go", Williams laments. As a horribly convincing slice of domestic trauma it cuts deeply into the listener, with only the aural anaesthetic of the harp and some breathy bass clarinets providing any relief. Enthrallingly uncomfortable. The emotional impact is never allowed to dull, but the music just gets better. "Sparrow", the single which we've been raving about here for months now, is remarkably different from the relatively delicate opening tracks, but then again its remarkably different from pretty much anything. It shudders with humming, pulsing keyboards over a rapid-fire drum machine, while Williams snarls "you're so god damn saccharine / that you break my teeth" over the top. The only thing you can easily compare the composition to is some of Dan Deacon's less head-achey pieces, but "Sparrow" has an emotional intensity that he could never mimic - the tension is strung so tightly it seems like it's constantly on the verge of snapping. One of the most fascinating songs of the year. "Magpie", thank God, brings everything down a notch. Yet even here, on a simple guitar lullaby, a subtle background synth howls like a distant wind blowing from some foresaken, horrific void. You can never completely relax. "Crow" and "Dove" are the same - outwardly straightforward, but gurgling with digital distortion and odd samples underneath the surface. "Crow" is particularly beautiful - opening with a scratchy rendition of The Last Post, it has an atmosphere of heavy, almost-overwhelming sadness, an understated funeral dirge which is suddenly stamped on by gigantic footsteps of bass noise toward the end. You can almost smell the freshly turned up cemetery soil. Though the album is only seven tracks long, the surprises continue right up until closing track "Hummingbird" suddenly steps into an unlikely groove towards the end, complete with comically discordant party horns, which is about as upbeat an ending as this album could cope with. But what an album it is. In a month that witnessed one of the most predictable, uninspiring Mercury Music Prize lists in memory, "The Bird School Of Being Human" contains more invention, imagination and emotional thrust than almost all the nominees combined, and heralds the emergence of one of the most intriguing British artists in some time. I always thought woodpeckers looked like such unthreatening birds. This one could tear you apart.
Read More