Share this article on:
Purchase Album
Loading Track...
Having recently entered The Guinness Book of Records/Freaks/People With Too Much Time On Their Hands by breaking Jay-Z’s record for most gigs performed in separate cities in 24 hours, The Flaming Lips look certain to set another one with their new album ‘Heady Fwends’ – Most Unlikely Collaborations On A Single Record. Boasting appearances from such diverse artists as Ke$ha, Nick Cave and Lightning Bolt, what sounds on paper like it could end up a vainglorious mess results instead in a surprisingly rounded album.
The fuzzed-up bass of 2009’s mind-blowing ‘Embryonic’album is still very much in evidence on ‘Children of the Moon’ (feat. Tame Impala), while ‘Is David Bowie Dying?’ (feat. Neon Indian) sounds like a David Lynch astral projection. Then there’s ‘The First Time Ever I Saw Your Face’, the Erykah Badu collaboration which caused a huge Twitter spat between Badu and Wayne Coyne when the raunchy accompanying video was leaked online. While admittedly less exciting when stripped of the video’s gratuitous, cornstarch-enhanced nudity, the song itself is ten minutes of vibraphone-flecked bliss.
The album’s full of equally impressive achievements, not least Yoko Ono’s least irritating appearance in many years on ‘Do It!’, and exhibits huge levels of scope and ambition. While it may go on a little too long, ‘Heavy Fwends’confirms what ‘Embryonic’ hinted at – The Flaming lips are making better music now than ever before. 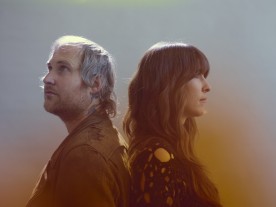 Aaron Doyes and Indra Dunis return with this, their third LP. Taking a kind of minimal world music vibe, moving through various dub and kraut influences, 'Lucifer' deffinitely does a lot. But not always at once. As expected with an album built up mainly of seven minute tracks the songs move through various 'moments'; flickerings of piano improvisations over looping bass and drum machines, percussive dub elements hinting at a dance side. The whispy vocals fade into the mix a little too heavily to warrant them being there most of the time. It does at times sound a little too much like a car advert, and doesn't do too much to get into your face. A slow burner for sure. One for stoners.
Read More