The first thing people have said when I’ve stuck this album on is always the same: “is this a Joanna Newsom album I haven’t heard before?”. It soon becomes apparent that it really, really isn’t.

For a start, the lyrics. Woodpecker Wooliams (or Gemma Williams, as she (probably) signs her cheques) may have anthropomorphic tendencies in her writing – every song on the album is named after a bird, with characters alternating between human and avian attributes – but this is no “Monkey & Bear” malarkey. Opening track “Red Kite” certainly sounds sweet, with its softly plucked harp and background birdsong, but the lyrics tell a much less pleasant story.

It begins with the protagonist browsing Facebook and suddenly seeing a photo of an ex in familar clothing: so far, so universal, right? Oh no, wait, it’s, “the very same thing I’ve been wearing since our last night…when you smashed my face in”. Ah. Shit. I honestly can’t remember the last time I heard a piece of music that contained such an unexpectedly jarring line. It goes on, and gets worse: “I’ve had a rash on my face where you spat there for three months now / It just won’t go”, Williams laments. As a horribly convincing slice of domestic trauma it cuts deeply into the listener, with only the aural anaesthetic of the harp and some breathy bass clarinets providing any relief. Enthrallingly uncomfortable.

The emotional impact is never allowed to dull, but the music just gets better. “Sparrow”, the single which we’ve been raving about here for months now, is remarkably different from the relatively delicate opening tracks, but then again its remarkably different from pretty much anything. It shudders with humming, pulsing keyboards over a rapid-fire drum machine, while Williams snarls “you’re so god damn saccharine / that you break my teeth” over the top. The only thing you can easily compare the composition to is some of Dan Deacon’s less head-achey pieces, but “Sparrow” has an emotional intensity that he could never mimic – the tension is strung so tightly it seems like it’s constantly on the verge of snapping. One of the most fascinating songs of the year.

“Magpie”, thank God, brings everything down a notch. Yet even here, on a simple guitar lullaby, a subtle background synth howls like a distant wind blowing from some foresaken, horrific void. You can never completely relax. “Crow” and “Dove” are the same – outwardly straightforward, but gurgling with digital distortion and odd samples underneath the surface. “Crow” is particularly beautiful – opening with a scratchy rendition of The Last Post, it has an atmosphere of heavy, almost-overwhelming sadness, an understated funeral dirge which is suddenly stamped on by gigantic footsteps of bass noise toward the end. You can almost smell the freshly turned up cemetery soil.

Though the album is only seven tracks long, the surprises continue right up until closing track “Hummingbird” suddenly steps into an unlikely groove towards the end, complete with comically discordant party horns, which is about as upbeat an ending as this album could cope with.

But what an album it is. In a month that witnessed one of the most predictable, uninspiring Mercury Music Prize lists in memory, “The Bird School Of Being Human” contains more invention, imagination and emotional thrust than almost all the nominees combined, and heralds the emergence of one of the most intriguing British artists in some time. I always thought woodpeckers looked like such unthreatening birds. This one could tear you apart. 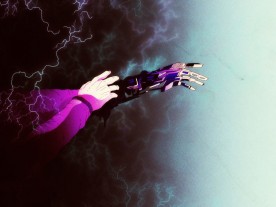 It's bizarre to think that this is The Gaslamp Killer's debut album. The hirsute beatsmith seems to have been around for donkey's years - he's a founding member of LA's influential Low End Theory club for pity's sake, yet peers such as Flying Lotus and Samiyam are already working on third albums while GK has, until now, contented himself with putting out occasional EPs at irregular intervals. Of course, in a way he has already released an album: his old pal Gonjasufi's debut was put together almost entirely by ol' Gaslamp. While the LP did contain a FlyLo joint alongside a handful from Mainframe, the mixture of dusty, gritty breaks, mystical eastern samples and straight up psychedelia bore the undeniable DNA of one man: it wasn't called "A Sufi A Killer" for nothing, the record was practically a duet. So what of his debut proper? Facetiously titled "Breakthrough", you half-expect it to be a meticulously-curated collection of all the best tracks he'd presumably squirrelled away over the years. The fact that it's actually an unbalanced, scattershot, deranged record full of unexpected twists and bizarre ideas is, in retrospect, much more fitting. The album begins with an intro so bizarre you may as well just instruct listeners to inhale a whippet of laughing gas before pressing play, and the way it suddenly switches into the Dr. Dre-esque string samples of "Veins", which features crackly, soulful vocals from Gonjasufi himself, is predictably unpredictable. At times it almost feels like an album constructed entirely out of interludes, with less than a third of the tracks breaching the three minute mark. Also, though featuring a whole host of collaborators, only Mr. Sufi's vocal contributions are obviously his, while the rest is left to guesswork. Are those Shigeto's rapid-fire drums on the droney "Keep It Simple, Stupid"? Whose wibbly synths are those on "Holy Mt Washington", Gaslamp's or Computer Jay's? The mystery is part of the fun. There's a lot of fun to be had on this album in fact, and not just on the snigger-inducing "Fuck". From the brutal synths and messy rhythms of "Impulse", to the relatively lengthy "Nissim", which snaps from an extended sitar solo into the album's jauntiest track with a perfect drop. Elsewhere, "Dead Vets" provides one of the best organ n' breaks exhibitions since DJ Shadow's "Organ Donor", and the farty synths of "Peasants, Cripples and Retards" will probably shake the eyebrows off your face if you have your headphones too loud. On the other side of the spectrum, "Apparitions" manages to update the smoky Ethiopiques sound of Mulatu Astatqé with impressive casualness. While there's nothing here that matches the catchiness of, say, "Turk Mex" from the "MY Troubled Mind" EP, the disjointed, mercurial shiftiness of "Breakthrough" provides a pretty perfect portrait of its creator. This is a man who got his nickname, remember, from the fact that his experimental Djing often killed parties in his former stomping ground, the Gaslamp district of San Diego. "I'm not making party music," he says, "I'm making head music". It's a cliché of course, but as a moody violin motif rounds off "7 Years of Bad Luck for Fun", the album's closing track, you're left thinking one thing - that was one hell of a trip...
Read More