It seemed like Seasick Steve had snaffled the last available bit of hobo schtick and scarpered, but in 2012 Willis Earl Beal has proved that the romantic appeal of the drifter musician still captures the imagination. His story, which he imparts in an excellent interview here, is less fanciful than the Seasick one’s tales of jumping boxcars but just as engaging. The way he came to prominence is particularly great: while homeless in Chicago he distributed hand-drawn flyers with his mobile phone number, offering to sing a song to anyone who called.

One can only imagine what it would’ve been like to hear one of his sprawling, disjointed numbers being bellowed down the phone line, but those songs were good enough to see him signed to XL this year. They quickly put out a version of his “Acousmatic Sorcery” album, complete with a zine of stories and sketches, although Beal has expressed minor frustration with some of the changes they insisted on making.

The record they put out is hardly polished, mind. The lo-fi recording techniques and idiosyncratic self-taught playing style is haphazardly distinctive, with Beal sometimes singing and sometimes simply rambling over sketchy ostinatos. ‘The Masquerade’, a disorientating stumble through a club populated by scantily-clad supermodels, is suddenly punctured by maniacal laughter at the end. Elsewhere he reveals a voice of raw, bluesy soul when he isn’t busy cackling.

Going to his gigs can feel like attending a spell-binding voodoo mass, with Beal as a volatile preacher prone to unpredictable outbursts (not least when he booted a homeless man in the face in Utrecht). While he may be signed to the same label as Adele and has appeared on Jools Holland, it remains to be seen whether his tales are too twisted to gain widespread success. As it is, we should just be grateful we can hear his music without having to make expensive long-distance calls to Chicago… 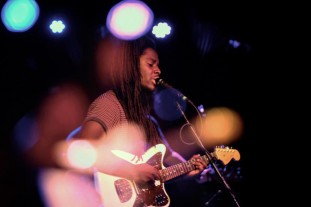 Phil Jones may describe himself as more of an artist than a musician, but considering the amount of time he's spent playing in bands (including a spell as Washed Out's live keyboardist) there can't be much to choose between both disciplines. He might be knocking out masterpieces like a pepped-up Picasso as far as I know, but his solo music, recorded under the name Dog Bite, seems intriguing enough to be more than just a sideline. The music of Washed Out is actually a useful point of reference, as Jones' music tends to sound similarly sedated, pleasurably hazy in that way that no one can quite bring themselves to describe as 'Chillwave' anymore. Dog Bite is a little bit more rough around the edges though; witness the dissonant, lop-sided guitars on 'Paper Lungs', which sounds like early Beck coming through the walls of a goth club, or the fuzzy riff that kicks off recent single 'Prettiest Pills'. The music occasionally recalls a fellow Atlanta resident, Deerhunter's Bradford Cox, who makes similar underwater hooks under his Atlas Sound alias. Upcoming tourmates Toro y Moi have also been mentioned in the same breath, although Jones is thankfully much less annoying (sorry, I just can't stand them). So what makes him stand out from this wispy crowd? The answer is in tracks like 'You're Not That Great'. It starts with a moody bassline based on two sneering semitones before some gorgeously blissed out guitars and vocals completely change the perspective, which is altered twice more during brief excursions into psych and grunge. It's a promising taste of Jones' undoubtable talent. You wonder what he'll capable of when he really lets himself off the leash...
Read More