If you’re Australian, you may be wondering how this can possibly be album of the week. After all, it came out the best part of a year ago Down Under, and to a rapturous reception too. So why has it taken so long to get a release over here? Not only have the band been supporting the likes of Roxy Music and Yann Tiersen in their native land, but their sound couldn’t be more up NME’s street if it put on a stupid hat, incessantly mentioned drugs in interviews and dated someone off the telly.

So why have they largely been ignored in the UK? Has the insuppressable memory of Jet sworn everyone off Australian indie? To my ears this is one of the most accomplished indie albums in some time, and I don’t mean “accomplished indie” in the way I normally do, i.e. “well-executed but dull-as-fuck”. Opening track “Polarise” is a swooping, unfurling charmer with the tom-centric percussion kept low in the mix so it doesn’t become overpowering like it often can (see: Esben & The Witch). Eleanor Dunlop’s yearning vocals actually sound quite English, and the fact the following track, a rollicking pounder with eighties-style vocals courtesy of Dunlop’s male counterpart Fraser Harvey, is named after a borough of Berlin, makes you wonder whether Cameras are consciously aiming for a European rather than Antipodean vibe.

Yet it is an American band they most often resemble. Not only do Harvey’s lyrics and melodies sound similar to those of Interpol frontman Paul Banks, but the brow-furrowed beats of drummer Ben Mason and the mostly melancholy mood also remind one of the New York band. Yet Cameras seem to take themselves less seriously – asked what to expect from the band live, Harvey admitted, “Some of our tunes can be…a bit pompous…I’m quite clumsy so you can probably expect me to fall over at some point too” – and they regularly chuck in enchanting piano turns or uplifting guitar lines to light up the occasional gloom.

The lead vocals are also sequenced pleasingly, with Dunlop and Harvey swapping duties often enough to keep things fresh throughout, and providing echoes of lush LA act Autolux whenever they combine. Yet the album’s instrumental title track proves that Cameras remain captivating even when no one engages their larynx. Perhaps it would’ve gone down better over here a decade ago, but “In Your Room” does indeed deserve to be heard in your room, whether it be in Sydney or Surbiton. It’s time to forget Jet and scope out Cameras instead. 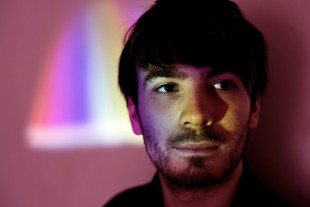 The most enjoyable release on Full Time Hobby for some time, “Tourist/Sleeper” is a mesmeric mini-album that takes the 'folktronica' stick generally used to beat vaguely twee bedroom artists with, smooths it down with some digital sandpaper, then hurls it lovingly into the listener's ears like a javelin (or, indeed, like Javelin). Seams (not to be confused with the Bitch Magnet/Superchunk offshoot Seam (or a million other bands with similar names)) is known to his family as James Welch, a "Berlin by way of Hampshire" producer whose day job is working for Soundcloud's community team - little surprise then that the entire record is streaming there for your delectation. While it has to be said that Seams doesn't so much mine fellow South of England-ers Gold Panda and Four Tet for ideas as strip them clean like an Apple-sponsored militia rampaging through Congolese mineral deposits, he does manage to make their sound somehow more accessible. The clipped samples and reverberating percussion on "Hung Markets" are perfectly judged, while "The Glow" is as clean, warm and absorbing as a freshly laundered dresing gown. Elsewhere, the beat on "Nachtmusik" kicks in just before things get too tinkly, and the slowed-down vocal samples of "Carnival" evoke the feeling of being pumped full of dissociatives then shoved into a large crowd. "Punch", meanwhile, takes things firmly in the direction of the dancefloor at a tempo which even those he mimics would shy away from. Critics will argue that Seams shys away from anything too dangerous or experimental, but while he does follow a familiar path you get the sense he's spotting a few things others missed along the same route. While Derwin "Gold Panda" Lau embarks on a headline tour of the USA and Kieran "Four Tet" Hebden hears his music being blasted out of multiple Olympic venues, James Welch's smoother, easier sound could prove capable of surpassing both their successes.
Read More