Mara Barenbaum, you suspect, is a subscriber to the idea that less is more. The San Franciscan’s debut album, recently released on London’s intriguing Night School Records under her Group Rhoda moniker, is an exercise in the effectiveness of simplicity. Barenbaum, working alone, employs little more than simple, unembellished drum machine rhythms and the barest keyboard accompaniment to her ghostly vocal melodies. Yet, though the formula is simple, the result is surprising – what starts off seeming like it’ll barely keep your attention ends up putting you in a trance.

The title of her album, “Out of Touch – Out of Time”, seems a little tongue in cheek. While the tools and production are admittedly very late seventies/early eighties, most obviously channeling the stark sound of Suicide, the overall effect is hardly out of touch – Group Rhoda fits very much into the niche carved by Maria Minerva, Julia Holter and even Peaking Lights (only much, much colder). The music is certainly not out of time either – the rigid drum patterns see to that. While their are brighter moments, such as the oddly tropical “Hi Rise” (like a tracing paper outline of Gang Gang Dance), the human element is dislocated, akin to finding an intimate photo of someone else’s family being blown down an empty alleyway. Even the catchier songs like “Fire” are more like spectres of pop than pop itself, which just makes them all the more appealing. It seems Group Rhoda haunt you in all the best ways. 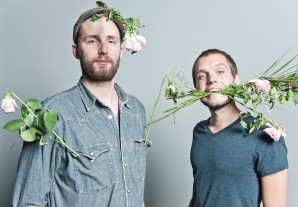 A French band who don't specialise in electro aren't likely to get much exposure overseas these days, with the nation's other musical styles still being unjustly tainted by the stigma of artists like Johnny Hallyday (which is in itself unfair: "Mon Fils" is a tune, right?). Perhaps that's why Loic Fleury chose to bring in the beats when he put his folk-rock band Lucky Lindy to one side and started Isaac Delusion with his old schoolfriend Jules Paco ("the good looking and popular guy" at school apprently, while Fleury was "the tall weirdo one"). Not that the band are some Justice rehash or anything. In fact, you would probably file them next to crossover British bands like Fujiya & Miyagi and Hot Chip, defined by well-constructed tunes, warm sounds and unthreatening electronic percussion. Isaac Delusion released their first EP, "Midnight Sun", earlier this year, with the title track's chopped-up samples and lush synth riffs providing the perfect laid back summer soundtrack. The critical acclaim was something Paco certainly never expected back when he used to laugh at Fleury's attempts to compose chanson, and he's admitted "we made fun of Loic’s crappy romantic songs; it was hard to believe he would become so talented". That talent is now being prolifically harvested, with another EP due imminently. Lead track "Early Morning" is typically, wistfully chilled out, all tweeting electronics and deftly plucked acoustic guitars. It may not quite be electro, but that shouldn't stop it gaining a wider audience beyond Paris...
Read More