Sheffield, Steel City. Although you wouldn’t necessarily have known it at this year’s Tramlines festival, where there was relatively little metal, noise, punk or hard rock on offer across an otherwise fantastic event, something that extends across most non-genre-specific festivals. Take Glastonbury: pretty much every musical style is covered, but hardly anything that involves amps cranked up to eleven. Or even ten. The fact that Radio 1 is currently promoting a “celebration” of rock music rather than simply celebrating it occasionally the rest of the year shows how niche heavier music has become, especially when you consider that this week-long event mainly consists of Fearne fucking Cotton introducing bands like Biffy fucking Clyro (creators of this atrocity among others).

Fortunately this doesn’t put off bands like Steel Trees. Formed in a grim-sounding former pit village called Goldthorpe, they’ve crafted a sound that incorporates the tastiest cuts of stoner rock, grunge and metal. Previously known as Airburst, whose high-point came supporting Dinosaur Jr. (“we got a lot of responses saying we were better to watch”), their new incarnation relishes in combining the catchier, QOTSA-style side of stoner rock with the less heroin-soaked elements of grunge.

Their recently released debut album “Attack of the Stoner Zombie Killer Kids!” is the sound of three guys in deep lust with making enthusiastic noise and not giving a flying Fearne about prevalent musical fashions. Or indeed fashion at all. Asked what distinguishes them from most other bands gets the following response: “We don’t have endless lists of music industry contacts and we’re not Jimmy Page’s nephews on his stepdad’s side, We DON’T wear top branded ‘in’ clothes and we’re pretty darn ugly…we’re not your average student band with nice happy families feeding our mkat habits and pumping money into us. We’re the outcasts, the stoned, the mad and the ugly”.

If that doesn’t make you want to listen to them, what will? Well, maybe the brilliant video below, featuring some unfortunate smalltown boys (and Batman) being beaten up by local tracksuit-wearing twats? Maybe that the frantic “Wreck(ed)” is the best update of ‘Bleach’-era Nirvana in years? Maybe the way “What I Tell You” lurches from grizzled, gothed-up grunge to frenetic, screaming choruses without skipping a beat? Maybe the simple fact they have a song called “Awesome Welles”? As they rattle through the album like a fat child steaming its way through a box of fun-size Mars bars, your fist starts involuntarily clenching, then punching the air of its own accord. This, my friends, is why heavy music should be celebrated more than once a year. 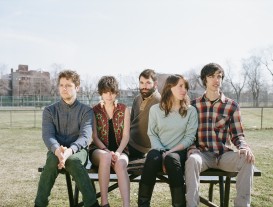 The sad, sudden death of Women guitarist Christopher Reimer didn't just have a devastating impact on his own band; former tourmates The Luyas were also deeply affected. While the band haven't mentioned Reimer by name when discussing their new album "Animator", it seems likely that his death is the one that apparently inspired its title. As the band's frontwoman Jessie Stein explains, "Our friend died on the first day in the studio and we wanted to magically be able to bring him back to life. Animators move things that can’t move themselves. It’s a desperate stab at something deeply quixotic and brutally impossible". It's a long way from the tongue-in-cheek title of their last record, 2011's "Too Beautiful To Work", which was not only a reference to the 'spoilt princess' archetype but "the idea that the music is too beautiful to sell a copy!". That throw-away sentence turned out to be pretty prescient. The record, an ambitious, kaleidoscopic mixture of delicate melodies and hopscotch rhythms, was easily one of the year's best but didn't get nearly the attention it deserved. Those that did invest time in it were richly rewarded by the arctic tropicalia of "Spherical Mattress" and the childlike hallucinations of "Moodslayer". The entire record has a magical quality, as if each song is lightly covered by powdery snow, and while Stein may not have the strongest voice, what she lacks in volume she makes up for in evocativeness. It remains to be seen whether "Animator" matches "Too Beautiful..." for quality (listen to a preview stream here and see what you think), but it's certain to be similarly hard to categorise ; even Stein admits the record is a bit of a mystery to her - "I feel like I dreamed the whole first part of the year, and the record fell from the sky or something". The band's members have fingers in various other pies - new drummer Mark Wheaton also plays in Land Of Talk, Stein moonlights in Miracle Fortress and Pietro Amato can be seen in Bell Orchestre (having previously blown his french horn for Arcade Fire) - but The Luyas play music that's far more interesting, and contradictory, than any of them: icily playful and comfortingly challenging. Stein balks at the word "experimental" though, saying it makes her "slightly uncomfortable because we are not reinventing the wheel or anything". Well, they may not be reinventing it but they're certainly making it more beautiful - next to The Luyas' glittering rims and shining spokes, most bands sound like a burst tyre on a broken tricycle.
Read More