One look at AlunaGeorge shows you they’re definitely not short on style – the London duo were featured in this month’s edition of British Vogue after all – but for those of us who want more than just a glossy finish they’re fortunately blessed with plenty of substance too. Their moniker, a portmanteu of singer Aluna Francis and producer George Reid’s names, is not the most imaginative, but the mixture of their individual talents more than makes up for that.

Ostensibly it’s out and out pop music, shiny and silky on the surface but with a beauty that is more than skin deep. Just indulge yourself in the bouncy synths and twinkling glimmers of the perfect “You Know You Like It”, or the Timbaland snaps and dew-drop vocals of “Just A Touch”, and you’re soon in deeper than a gambling addict desperately betting their last packets of cigs on olympic equestrian dressage.

They have the moves (and the bass) to win over suspicious crowds when playing live too. While it’s pretty rare for British acts to do the pop/RnB thing nearly as smoothly as their American peers, AlunaGeorge are the most convincing proponents of it since the original Sugababes. Hopefully they’ll be a little more resistant to line-up changes than that band though; their name, if not the future of original British pop, depends on it. 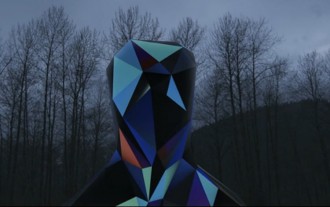 It's not a huge surprise to learn that Julien Mier's music is influenced, not so much by other musicians, but by the sea. The 23-year-old grew up on the Dutch coastline, and there's a trickling ebb-and-flow to his music that reflects his affinity to the ocean - not entirely a pretentious extrapolation by the way, as Mier himself describes water as “something inspirational...it moves and changes all the time". Releasing his first EP at the tender age of 18, the increasing progression of his music can be attributed to years spent studying music production. You just know he's one of those guys who, when faced with a new piece of music software, manages to knock out a jaw-dropping beat with a few simple clicks and taps while you're still struggling to work out how to turn the volume up. His new EP, “When Will You Wake Up”, feels like the fruition of a formula he's been working at for many years. Lead track “Watercolour Sky”, with accompanying video of a giant origami sky-squid, is a luscious mixture of warped electronics and jazz flourishes that will be familiar to fans of Flying Lotus. “Glide Sail Float” adds some charming vocals courtesy of Myrthe van de Weetering, while the bubbling, burbling beats of “Capsized” brings Mier's watery essence to the fore. It's a storming release (another triumph for Canadian label King Deluxe) and hopefully there'll be more to come soon. Provided he's finished his studies of course.