When the line-up for Brighton’s inaugural Mutations festival was announced two months ago, we immediately sat up and took notice. A two-day festival in one of our favourite cities, featuring some of our favourite bands? Alright, go on then.

The Mutations schedule came out this week and, while there are no wrong choices in a situation like this, we thought you might appreciate having a look (and listen) at what we’re likely to watch. That way, even if you can’t make it to the festival you can still enjoy some fine, fine music (and make yourself extra jealous).

So take a gander at The Monitors’ Mutations schedule below, and if you’ve no plans for next weekend, book your Mutations tickets here.

These Ohionites (that’s people from Ohio to you (and to them, seeing as we just made it up)) charmed us with their recent video for ‘Bad Ideas’ (above). Possibility a little too much, as if they don’t come onstage looking like human versions of the dog from Beck’s Odelay! we’ll be very disappointed.

Captured Tracks duo Widowspeak are currently on tour with Saintseneca, so they should’ve locked into a solid one-two double-act by the time they hit Brighton. Musically they target a sweet spot somewhere in between Low, Hope Sandoval and Tarnation, which should make for a mellow afternoon treat.

Alex Allsworth has already ranted about how excited he is to see Willis Earl Beal, and suffice to say it should be one of the most spell-binding performances of the festival. Assuming he actually makes it over here this time.

Everyone loves watching nature documentaries right? Well you’ll find no soothing David Attenborough commentary when brattish punk trio Nature Channel take the stage, but those who’re desperate for a biology fix may find it in the track ‘Rabbit Starvation’. Or possibly not.

We waxed lyrical about Fresh Snow recently, and by the sounds of it their Hand Drawn Dracula labelmates Chastity are well-equipped to match them for intensity at this debut UK appearance.

If Florence Welch is supposed to have both a big voice AND a machine, then Written In Waters’ Beth Cannon must have lungs like zeppelins and an even bigger machine. It doesn’t matter which venue you choose to visit at 5.30pm, you’ll likely be able to hear Cannon’s booming voice at all of them.

Chelsea Wolfe’s wounded 2013 album Pain Is Beauty not only proved its title to be true, but also made it into our best albums list that year. Her latest record, Abyss, is right in the running to make this year’s list too, and its amped-up, doom-ridden guitars are sure to leave The Old Market shaking.

You may have noticed that so far all of our picks have been at The Old Market. Well, that comes to an end now (possibly because Chelsea Wolfe will have reduced it to rubble by this point), as we head to All Saint’s Church to worship at the altar of Abi Wade. We’ve not heard much from the arch cellist-manipulator recently, but hopefully her new material will pack the same punch as 2013’s ‘Boxer’ (above).

As you can see, Josh T. Pearson has a thing for singing in churches, so he should feel right at home here. These are Pearson’s first UK shows for several years, and while he seems to have trimmed his beard, his voice is clearly still in fine fettle. Hopefully we’ll get a cover of The Louvin Brothers’ ‘Satan Is Real’ too…

Our Seattle correspondent Ellie Brennan saw former Girls man Christopher Owens this summer, and her review opened thus: “On July 1st I experienced one of the best shows of my life, a show I was not even expecting to like.” Read the rest of her experience here, and then round off your first Mutations evening in Owens’ charismatic company…

How you start Sunday may depend on what state you’re in. The ultra-hungover may be tempted by the ambient sounds of Alma at The Prince Albert, while those in search of something more invigorating should catch Kagoule at the Green Door Store. Being an indecisive lot, we may just meet somewhere in the middle and plump for Wild Cat Strike’s epic post-rock…

Vision Fortune’s Country Music may be one of the most underrated albums released this year. Perhaps people were actually expecting some C&W ballads? More fool them, as Vision Fortune are making the sort of psyche-shattering music that Liars used to, and are sure to lightly fry your brain at Mutations…

… before Dan Friel whacks it in the microwave and sets it to nuclear. Ever wondered what an 8-bit Dan Deacon album of Sonic Youth covers would sound like? Let the former Parts & Labor leader give you a glimpse – a blinding, strobing, eye-popping glimpse…

I’m not going to lie, the prospect of seeing Ought perform ‘Beautiful Blue Sky’ is making us moist in all the right places. It’s actually a bit unpleasant. Curse you Ought! While it’s unfortunate that they’re playing at the same time as Naytronix, the band’s mid-afternoon Mutations slot means the sun should actually be coming down as they play ‘Sun Coming Down’. Nice.

Sadly the scheduling means we’ll likely miss most of the magnificently named Sea Bastard’s set, but hopefully we’ll get to The Haunt just in time for their final doom tsunami…

As Emma Hall discovered back in June, listening to Blanck Mass in public means you run the risk of being “left in the wake of this pulsating wave of industrial electronica, to be later swept up by a Clapham bin lorry.” Seeing the sometimes Fuck Button do his thing at The Haunt should be comparatively safe, for your physical body if not your eardrums…

This is the second really troubling clash of the festival (Ought vs Naytronix being the first), as OM’s set will overlap with Jane Weaver’s performance at Patterns. Still, you can’t turn down the chance to see this lot when you get it. Or rather you can, but then you later regret it massively; trust me on that one. Put simply, this is possibly our pick of the entire festival…

“If you like metaphorically being spat on, covered in shit and pushed into a bin filled with burning dog hair for good luck, then my child you are in luck…” That’s how Luke O’Dwyer presented Blacklisters’ scorching Adult album recently, so metaphorical fans of the aforementioned, you know where to be at 7.15pm…

Legendary noise maniacs Lightning Bolt were on NBC recently?! Why didn’t anyone tell me? See above for the evidence, and then get your arse to Concorde 2, where it will be swiftly blown away in a sonic hurricane…

Seemingly every single one of our favourite bands has supported Metz at some point, marking them out as men of fine taste, and yet somehow we’ve never managed to see them live. Mutations has benevolently provided us with an opportunity to correct this error, and for that we thank them. Hopefully there’ll be pancakes too…

At this point we probably won’t be able to speak any more, but we WILL be able to dance. A Formation DJ set at Patterns from 9.45pm should help in that regard, and that’ll be followed with the slick sounds of Tourist. Is this the right place for a ‘one Tourist you will want to bump into along the seafront’ joke? Yes. Yes it is.

Every festival needs a good finale, and Mutations have pulled off quite a coup by getting John Talabot to close out proceedings. Spain’s finest will be DJing back-to-back with Brighton boy Leon Vynehall, showing just how adept the Mutations team are at combining the best local talent with awesome acts from around the world. The only problem is, after a weekend like this, will we ever be able to Mutate back into our original form? 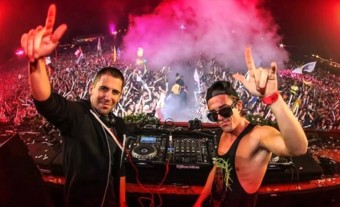