If you found yourself between Tooting Bec and Fitzrovia at any point last week, chances are you will have seen a bedraggled ginger girl trudging by the roadside through the wind, rain and occasional sunshine. With some headphones on.

Well that was me, completing a hare-brained challenge of walking to work and back each day for a week – or a half marathon five days in a row – in support of the Single Homeless Project, a local charity who do hugely important work to help the homeless and vulnerable in the capital.

In an attempt to pass the near 24 hours of walking, over the five days I gave five albums released in the past month a listen. Now, as I nurse my battered feet and blow the last traffic fumes from my nose, I’m reporting back to you lot on the often weird and occasionally wonderful sounds I heard…

Monday’s miles kicked off with the latest offering from former Mint Chicks frontman Ruban Nielson. The album is mostly a synthy, psychedelic adventure through his rip-roaring sexcapades of years gone by, and made me seriously question just how carpe diem my last ten years have been.

The singles on the album are strong – ‘Can’t Keep Checking My Phone’ is full of southern hemisphere jangliness akin to Tame Impala, whilst title track ‘Multi-Love’ boasts delicious baroque chord flourishes and a cold core of embittered lovers’ lyrics. I also love ‘Necessary Evil’, with its drawl of an organ line and retro brass echoing the chorus words.

Sometimes the songs veered too far into mind-expanding territories for my liking – I can say from experience that it was about as fun listening to ‘Like Acid Rain’ as walking in the acid rain of London’s streets – but overall, Multi-Love made for a funky start to the week.

Passing beneath the angular high-rise developments of Vauxhall and the South Bank, I imagined this album could be the corresponding sound of the future. Not the shit version of the future (SOPHIE is taking care of that department), but the point where humans have truly mastered the ability to make musical masterpieces out of electronic signals and currents. Maybe all this walking has left me with too much time to ponder these things.

In any case, Herndon has an undeniable talent for drawing on disparate sounds, pushing them for minutes on end, and at the point where you’re like ‘Holly love, I’ve lost you’, she flicks some kind of switch, makes an inversion, and it all makes fantastic sense. Except for ‘Lonely At The Top’, a spoken word interlude which seems essentially to be an audio of David Cameron’s wet dream. I never want that to make sense.

I’m trying to think of any other place I might choose to listen to this except for over several stormy miles down Wandsworth Road and I’m struggling. Nevertheless, if you’re keen for a trippy Wednesday night, I’d recommend you tubing it to Vauxhall, pressing play and walking on until Clapham Junction.

The album consists of classical music samples taken from Rubik aka Shaun Yules’ CD collection, mathematically rearranged according to a pretty convoluted rulebook. It’s impossible to predict the rules on the first listen alone: I got the fright of my life at 2.20 of track three, ‘Blackwave’, when two minutes of pleasantly sampled strings inexplicably burst into two seconds of demonic screaming sampled from the depths of hell. From that point, the nicer any sound got, the warier I became.

The resulting schadenfreude was comparable to watching a good psychological horror film – the familiarity of the samples lures you into a false sense of security, before it all gets distorted and makes you realise that your perception of reality is nothing more than a thin veil covering a horrifying subconscious beneath.

An intriguing listen, but God help you if a song from this album comes up on your Shuffle.

I’ve got to admit that by Thursday, an album of actual proper songs with verses and choruses came as welcome respite from the ‘challenging listens’ of the previous two days. Paul Marshall’s Lodge has a clean quality, combining understated vocals, piano, bass, drums and eerie muted trumpets, all recorded in a remote lodge (see what he did there) with ‘no studio trickery’.

Before hearing this, I thought Keane had killed the ‘single chord played eight times per bar’ approach to piano for a whole generation, but Marshall just about pulls it off, especially in the slow-building ‘Alligator’ and the threatening ‘Taking Steps’. In total, the album reminded me strongly of Douglas Dare’s excellent debut Whelm from last year, though my urban ears still prefer the mild electronic tampering of the latter.

Nevertheless, Lone Wolf was a soothing voice for my blistered soles and for this I thank him.

By Friday I was in need of the strongest kind of musical fuel to propel me over the finish line. Blanck Mass delivered. After an ambiguous opening, second track ‘Dead Format’ left me with no choice but to pick up the pace or be left in the wake of this pulsating wave of industrial electronica, to be later swept up by a Clapham bin lorry.

Every track is delicious: rich in texture, intelligent in rhythm, measured in its application of build-up and release. The sound of the melodies falls somewhere in between the Scooter and dial-up internet, but I’m okay with that. The tuned bass drum riff of ‘No Lite’ is one of the most addictive noises I’ve heard all year, and Benjamin John Power masterfully builds a web around it and ekes out every last bit of goodness over nearly ten minutes. With that waste-not-want-not mentality, I’d bet he makes a mean chicken stock too.

And before I knew it, the seventy miles were done and the Northern Line commute was beckoning again. It’s not often that I set out of the house walking with the express intention of getting to know a new album, but it’s been pretty ace this past week, and definitely something I’ll be doing more of in the future. Once my feet have stopped shedding skin and I’ve recovered from Rubik’s scare tactics, that is.

If you’d like to find out more about the work of the Single Homeless Project, or if you’d even like to make a donation, you can visit justgiving.com/tooting-to-goodge, or drop me a line at @emmatheclaire. 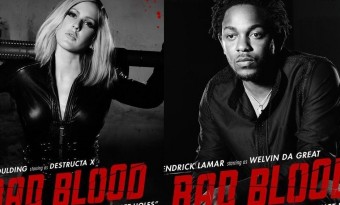 Taylor Swift and Kendrick Lamar's 'Bad Blood' congeals all over this week's singles round-up, but luckily the likes of Keyes, Pink Rick and Novelist save the day...
Read More