If you’d never heard Chelsea Wolfe‘s music before, you’d be forgiven for slipping down a valium, sticking some earplugs in, and preparing for an extreme auditory assault. Why? Firstly, the success of her first two studio albums, The Grime and the Glow and Apokalypsis, led to her opening for noise terrorists Sunn O))) and Swans. Then there was Unknown Songs, which despite being an acoustic album still found itself being compared to the infamous, murderous, black metal nazi bastard Burzum (who Wolfe has covered in the past). Then earlier this year the Prayer for the Unborn EP appeared, which consisted of cover versions of Crass-related anarcho-punk band Rudimentary Peni.

That, combined with the fact that Wolfe describes listening to the white noise of black metal as “peaceful” (and to be fair, on occasion I’ve felt the same), might lead you to expect an uncompromising listen. Yet there’s nothing on Wolfe’s third proper studio album, Pain is Beauty, that won’t appeal to fans of Goldfrapp as much as Ginnungagap. Her most accessible album to date, many of the tracks were originally composed for an electronic side-project with synth and bass player, Ben Chisolm. Yet over time they’ve gradually been subsumed into the Chelsea Wolfe set, and judging by the quality of this record that’s a very good thing indeed.

Opener ‘Feral Love’ sounds like a Sci-Fi Noir theme (there really should be more Sci-Fi Noir films being made). Palpably tense, there’s a hint of Planningtorock‘s ‘The Breaks’; only where Janine Rostron’s music remains sensual and playful despite its starkness, this is like gazing at a hole in the ice. ‘We Hit A Wall’ is also unremittingly maudlin, its viola sweeps smearing across the music like a hand wiping away tears, while the weighty tread and solemn tone of ‘House of Metal’ bring early Mogwai to mind.

‘The Warden’ then manages to make everything both brighter and bleaker at the same time. The fluttering instrumental, electronic beat and wispy vocals recall Grimes, but while it feels much airier than anything else on the album, that only serves to make the torture-based lyrics even more shocking: “The warden bore a hole in my skull, it’s true / Tore off my limbs and my breasts”. It’s like ‘Ode To Sad Disco’ by Mark Lanegan if Necrosis rewrote the words.

‘Destruction Makes the World Burn Brighter’ is both the best song title on the album and the catchiest track. Snaking guitar riffs combine with seductive singing in a way that will be familiar to fans of Dark Horses. The band that is, not the animals. A horse’s song is rarely seductive.

‘Sick’ is rarely seductive either. Twisted, murky and progressing at an almost unbearably slow pace, it feels a bit like being drowned. The whining, high-pitched synths sound a little like those from Assault on Precinct 13, and there are touches of Moby’s ‘When It’s Cold I ‘d Like to Die’ too. Is that enough to justify use of the term ‘cinematic’? Yes, I reckon it is. This is cinematic. “I should be put to death for ever being cruel to you,” run the lyrics, proving once again that Wolfe is not one to mince her words.

If this point resembles drowning, it’s fair to say the album rarely resurfaces. While ‘Kings’ is deeply dramatic, Wolfe is better when showing a bit of restraint. To be fair the song does move into a catchier second section, during which it appears to be impossible not to bounce up and down like you’re riding an invisible pony. Unfortunately ‘Reins’, while helping with the equestrian theme, doesn’t actually offer much to grab hold of, while by the time ‘Ancestors, the Ancients’ ends the unremitting bleakness has become a little claustrophobic. Perhaps that’s the point and I just haven’t got the goth stamina to keep up, but it does seem like the tunes start to disappear towards the end of the album.

While the acoustic guitar of ‘They’ll Clap When You’re Gone’ provides a welcome tonal shift and some devastating lyrics (“Someone opened me up while I was sleeping / And filled my body right up with sand”), ‘The Waves Have Come’ is a good 8 minutes too long. Which is especially damning seeing as it only lasts 8-and-a-half minutes. Wolfe has talked about hating the ending of George Orwell’s 1984 so much she rewrote her own ending where (SPOILER ALERT!) Winston doesn’t betray Julia. Well, if she’s allowed to do that then I’m allowed to rewrite this album so it skips straight past this and onto the closing ‘Lone’, which, like ‘They’ll Clap…’, feels like a lonesome cowboy song from a wild, defiled west, where it always rains.

While the title of Pain is Beauty may feel like it’s been lifted from the margins of a teenage emo’s schoolbook, you have to say it rings true here. Wolfe’s music may stem from pain, but it is also frequently beautiful. Trying to explain the concept of the album, Wolfe told Fader: “When you think about forest fires and things like that, it seems like such a terrible thing and it’s so harsh, but it really makes new room for growth to happen”. While we don’t endorse tossing lit matches into piles of dry pine needles, we do endorse this album. Stick it on, and let it burn away the detritus in your heart.

King Krule - 6 Feet Beneath the Moon 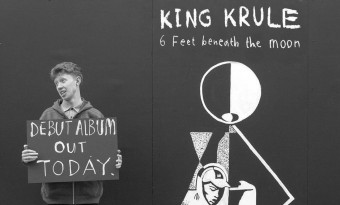 It started when he was 12 (and the rest of us have been waiting since he was 16), but King Krule refuses to spoonfeed his long-awaited debut - and it's all the tastier for it.
Read More