Dead Fader, JK Flesh, SEXWITCH and Radar Men from the Moon… there’s a great B-movie waiting to be made out of this month’s EP Address, but more importantly there are eight great EPs to be bewitched by first…

Dead Fader put out two albums simultaneously last year: the twisted, dreamlike Blood Forest and the violent, pulverising Scorched (we reviewed both here). Sun Copter shares the same label (Robot Elephant) as the first of those records, and for a reason – it’s much calmer than Dead Fader’s more abrasive work. However, while Blood Forest floated on a more hallucinogenic sonic tributary, Sun Copter takes a lonelier, more ominous route.

The pensive opener sets the tone, with discordant foghorns droning over a palpitating heartbeat; it wouldn’t feel amiss in a tension-teasing John Carpenter scene (a supposition given some substance by its title, ‘Nightmare Sequence’). The early Autechre throb of ‘Sun Copter’, on the other hand, semi-contradicts its title by sounding like it was made in a post-apocalyptic wasteland where the sun had been permanently blocked out (although there are some helicopter sounds, so it’s not completely misleading).

In comparison, ‘Black Maze’ sounds positively banging, with flanged piano chords dripping down onto a minimal beat, while wordless voices contort in the background (sounding not unlike Thom Yorke, weirdly). Dead Fader has a new album, Glass Underworld, out later this month. Judging by this we should approach it with no little excitement, even if Sun Copter suggests that evil will likely lurk within.

Fresh Snow’s immaculately titled ten-minuter ‘Don’t Fuck A Gift Horse In The Mouth’ already got a royal arse-kissing in our Single-Minded column recently, and we’re pleased to confirm the EP it comes from ain’t half bad either. While some of it, such as the similarly proportioned, sax-blasted opener ‘King Twink Rides Again’, might be a little too major key orientated for some tastes, there are plenty of spicier treats in store.

‘Proper Burial’ is one of them. It feels like a Beach House version of Fat White Family’s ‘Touch The Leather’, thanks in part to DIANA’s Carmen Elle providing some sweet melodies over the top. The limber ‘Blood In The Sun’ has a title that belongs on a Dead Fader record (see above) but is considerably more upbeat, although the ambient tones of ‘Delft’ are considerably less dynamic. In truth it’s both pretty and pretty dull, befitting of the Dutch town it’s twinned with.

Luckily our favourite ten-minute warning against equine abuse then rides in to save the day, seeing us off with Damian Abraham’s playful screams ringing in our ears…

A final note: Toronto-born author (and occasional Monitors critic) Zoe Cormier fingered Fresh Snow as being Canadian within five minutes of the first track. Make of that what you will. (She also hated Abraham’s guttural roaring for what it’s worth.)

JK Flesh – Nothing Is Free

I must admit to not being well-versed on much of Justin K. Broadrick’s more well-known work, but this nine-track EP (come on dude, it’s basically an album) by the Godflesh co-founder has certainly tickled my tastebuds. Albeit after ripping out my tongue and using it to paint rude words across my chest.

Opener ‘Nothing Is Free’ is a brutally bassy (and surprisingly groovy) bit of industrial techno that shows up most of the Blackest Ever Black lot for the posturing posers they are, and bleeds pleasingly into the more punishing grind of ‘Hide & Seek’. If your eardrums are tattered by this point then be warned that ‘Boundless Submission’ is about to boot them right bloody in – it’s blasted with so much distortion that it feels like it might crumble in your hands – while ‘Peace In Pieces’ toys with breaking into a pitched down and dirty DnB track.

If this sounds like a rather intense way to spend an hour, it doesn’t feel like it. The EP is deep rather than destructive, and exploring those depths is more fun than you might think, thanks partly to Broadrick’s inherently engaging sense of rhythm. Listen to the weighty, dubby skank of ‘Pleasurer’ or the drum machine manipulation of ‘Kontorted’ and try not to nod your head. Meanwhile the subtle shuffle of ‘Offering’ shows JK Flesh doesn’t need to rely on decibels to demand your attention.

The final two tracks sum up why the EP is a pleasure instead of a slog. ‘They Own You’ has an airy yet decayed ‘outsider house’ vibe akin to Huerco S.’s Colonial Patterns album, with added queasy bass growls, before ‘Nails’ hammers the record shut with a hearty industrial stomp. I don’t know what Broadrick aficionados think of Nothing Is Free, but as a near newcomer I can’t get enough of it.

Listening to this after JK Flesh is like taking a warm, soapy bath after a fifteen hour stint whipping leather-clad Tory backbenchers in a Mancunian S&M dungeon. From the seductive clarinet that slithers all over the title track to the squirty electro-funk of ‘My Girl Scout Cookie’, Kije Manito shows a technical proficiency uncommon for a debut release.

The only thing that confuses me is that Kije Manito (Amerindian for ‘great spirit’ according to the press release) is apparently a bloke, yet unless he has a very effeminate voice there is a female singer on the first two tracks. I’d be intrigued to know who she is, as her languorous delivery helps smooth out the more skittering elements of Kije Manito’s production.

Not that his sound needs much improvement mind, as the sparkling, staggered synths and smoothly rounded basslines of ‘Ctwo’ and the harp-lucking ‘Cause My Love Is Dead’ prove. It’s a record full of masterful attention to detail, a sultry and spirited showing that suggests great things really are to come from Kije Manito.

Radar Men From The Moon – Subersive I

Berlin band Brace/Choir first brought the term trancerock to my attention, and Eindhoven’s Radar Men From The Moon are the only band I’ve heard since who the term seems to suit so snugly. While the band’s repetitive music feels far more regimented than Brace/Choir’s, Subersive I shows a hypnotist’s talent for making that technique mesmeric rather than mundane. If you like occasional Fuzz Club labelmates Dead Skeletons, you’ll find much to love here.

While opener ‘Deconstruction’ isn’t the best example, coming across like a more po-faced version of Chrome Hoof’s disco-metal, the rest of the record shows they know just how to let a track subtly evolve. The latent threat of ‘Habitual’ is left to stew in its own fecund juices for over nine minutes, resulting in something resembling The Soft Moon at their most darkly delicious. ‘Neon’ is even more patient; perhaps overly so seeing as it takes almost four minutes to kick in. Luckily it does so with irresistible force, chugging away like a psych-rock steam train.

‘Hacienda’ rounds things off by taking the best bits of each of the previous tracks: the expressively groovy drumming of ‘Deconstruction’, the goth-friendly guitar lines of ‘Habitual’ and the intermittent flashes of noise emitted by ‘Neon’. You’re left with the impression that this is a band that demands to be experienced live – and luckily you can do just that at the Fuzz Club Festival in London next month. Set phasers to fuzz…

River Tiber – When The Time Is Right

The first seconds of this EP’s opening track, ‘No Talk’, immediately bring to mind the superb Beak/Kaeb record we reviewed in last month’s column; the production has that same woozy, hypnagogic feel that’s so on point right now. However, the moment Tommy Paxton-Beesley’s voice appears (for River Tiber is he), that illusion is shattered. Or enhanced, depending on your tastes. Personally, these sort of syrupy, affected James Blakeianisms often leave me cold, but ‘No Talk’ is so great it’s almost impossible not to be won over. (Just ask Drake, who sampled it for ‘No Tellin”.)

Moreover, that positive reaction is sustained over the rest of the record; even if the languid ‘Lost’ and sleepy ‘When The Time Is Right’ aren’t quite as ear-catching, they still sound gorgeous. Only the flat, pedestrian nu-soul thud of ‘Waves’ fails to impress, as while ‘Let You Go’ verges on being a bit wet, the perky bubble-bursts of the percussion give it a popping candy crackle. It also transpires that he contributed custom sounds to Ghostface Killah’s essential recent collaboration with BadBadNotGood, suggesting that for River Tiber, the time really is right.

Segilola breezed onto our list of 2014’s finest EPs, and with Halt she’s a favourite for this year’s edition too. Once again teaming up with Yorkshire knob-twiddler Bambooman, it’s somewhat more sombre than last year’s Somewhere Along The Line, but no less impressive for that. Take the weary soul of ‘Hurry Along’ for instance, which fizzes, clanks and crackles around Segilola’s vocal like the world’s smallest, saddest fireworks display, or the air-locked lament that is the beguiling ‘Platform’.

The track ends with a flurry of woodwind courtesy of multi-instrumentalist Greg Surmacz, and his piano also forms the basis of the pastoral ‘Catching Rays’, before ‘Potions’ takes things back into more electronic territory. The bouncy whirr of ‘Steadfast’ then rounds things off, although there’s still time for a remix of ‘Hurry Along’ by Gilles Peterson favourite Crewdson, who rises to the admittedly straightforward task of producing the most upbeat track on the record. Yet as fun as his clicky reworking is, it’s the opening two tracks that you’ll keep going back to whenever you feel like halting time for a second.

Bat For Lashes and TOY are two acts who often threaten to excite, but rarely actually manage it. Several times I’ve heard a song by one or the other and decided to check out the album that spawned it, only to find myself listening through yawn-induced tears before the end. A collaboration between the two, wherein they cover obscure foreign records, again sounds like a great concept. And again, the worry is that it’ll inevitably end up disappointing, even with Kate Tempest producer Dan Carey at the helm. Imagine my surprise when SEXWITCH turns out to be the best record either of them have ever made.

We already gave their Cheikha Hadda Ouakki cover ‘Ha Howa Ha Howa’ our approval in last week’s Single-Minded column, and the good news is that the rest of the record invokes that same whipped-up, whorling spirit. ‘Helelyos’ adds an echoing, feminine touch to Zia Atabi’s original, ‘Ghoroobaa Ghashangan’ stirs in a splash of spiralling funk, and ‘Kassidat El Hakka’ is the best justification for the project’s ridiculous title, a demonic witches brew that goes down a treat. Only the lounge-y take on Chanpen Sirithep’s ‘Lam Plearn Kiew Bao’ feels a bit lightweight, but then the original doesn’t do much for me either.

The fact that all the tracks are covers helps answer any potential accusations of cultural appropriation too – these are joyous tributes rather than uncredited thievery. Much like listening to Turkish versions of Yardbirds hits or Thai covers of Boney M, half the appeal is what’s done ‘wrong’, the inevitable, unavoidable differences that make the music sound familiar yet exotic at the same time. Here the voice, instrumentation and production are the recognisable elements, but the source material forces them to contort into unusual positions that make them sound much more interesting – even the Skip Spence number, which you might think would be the most natural fit, has a looseness and organic structural swell that you don’t usually hear from Bat For Lashes or TOY. If they can channel that into their future work then any past disappointments will soon be forgotten.

"Everything I forgot to review" - featuring LV and Born Ruffians... 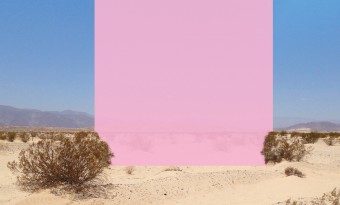 Alex Allsworth reviews all the records he forgot to review previously, with new and not-so-new releases from LV, Born Ruffians, Kim Hiorthøy and Kid606...
Read More