I bloody love claymation. If it were possible I’d probably fill this entire column every month with claymation videos, but the time-consuming production process means hardly anyone has the patience to make them these days. Praise be, then, to Callum Scott-Dyson for this video for ‘Stones’ by Ceiling Demons, a Yorkshire hip-hop outfit we last heard from when we interviewed them back in 2014. Here they’re transformed into hooded Morph-like creatures, wandering through an ominous world to bleak and shadowy beats…

Big fan of this track, and Cela Collectif & Meskaprod have done a sterling job with the video too. Featuring a series of animations projected onto abandoned buildings, the beautifully framed ‘Desert’ injects new life into scenes of urban and industrial isolation.

Worried about impending enslavement by our soon-to-be robot overlords? This might help put you at ease. One of the catchier cuts from Kaytranada’s recent 99.9% album provides the beat to which the Canadian producer’s automated offspring learns to dance in a series of sunny scenes; until dusk at least, when the little guy gets out body-popped and goes into a sulk. Luckily Kaytranada is there to comfort him and thus prevent the start of a Terminator-style takeover…

If any other band attempted to make a video in which they collectively formed a giant vulture and engaged in Godzilla-style battles with Cybermen and anthropomorphised bees, I’d suggest they’d probably bitten off more than they can chew (of an oversized Fly Agaric mushroom). However, King Gizzard & The Lizard Wizard are not just any band, and both the music and visual of ‘People-Vultures’ shows they’re at the peak of their powers. I won’t be fully satisfied until I seem them perform live as the vulture though…

Mind Enterprises earn their place in this month’s MPEGs Eleven by employing a director, Eran Amir, capable of making a 360˚ music video that’s actually inventive, rather than just putting the camera in the centre of some band members while they go through the motions during rehearsal (honestly, the amount of 360˚ videos I’ve seen like that…)

A compelling love triangle forms the basis of this brilliant video for Mira, un Lobo! (Spanish for ‘Look, a wolf!’ – cheers Duolingo.) Directors Chris Lee & Paul Storrie tease some fantastic performances from their small cast, which is particularly impressive considering one of them is a glove puppet.

The best compliment I can pay Ryan Ohm’s video for Mothers’ ‘Copper Mines’ is that it made me nearly as happy as its protagonist. Which is really saying something. I defy you to watch this without smiling at least once.

We included this in a Single-Minded column last month, but the video also deserves praise. The Romeo & Juliet overtones are clear, and engagingly wrought, but Mykki Blanco has indicated that it’s also intended to comment on the ongoing Syrian refugee crisis. “I had once thought Europe was my safe haven from American white supremacy,” explains Blanco, “and how wrong I became.”

While the track has grown on me since, I was initially more impressed with the video for ‘Burn The Witch’. Director Chris Hopewell and a skilled team of animators transport Summerisle to Trumptonshire (watch The Wicker Man first if you haven’t seen it before and want to avoid spoilers), and again is apparently intended to draw attention to the refugee crisis. Certainly it satirises the idea of Britain as a welcoming place for outsiders…

***
Robbing Millions – 8 is the figure that I like the most

I have no idea what’s going on in Marine Dricot’s video for tuneful Belgian band Robbing Millions, but I like it. As far as I can work out, the number 8 has become a kind of drug (hence the reason they like it the most), fuelling the sort of party where everybody’s just a little bit too happy. Full marks to the cast for an intense array of rictus grins.

I was really impressed by the production values on TOM And His Computer’s recent Small Disasters EP, and those values cross over into this video, directed by Martin Garde Abildgaard. A stunningly shot and sexually tense production, ‘Organ’ sees its protagonist dragged along the coastline by a mysterious force… 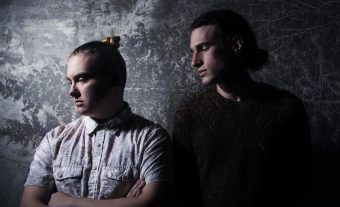 Drone-pop duo Lying Light in the Quiet present an exclusive play of their latest video, which accompanies the title track from recent album Recovery...
Read More