There’s been a certain amount of confusion surrounding Thom Yorke’s Atoms For Peace project. Is it a supergroup? A solo album with some mates helping out? An update to “The Eraser”? An attempt to erase “The Eraser”? And what the hell’s Flea doing there anyway?

Does any of this matter? No. What we have here is an album created by the band Yorke put together to tour his debut solo album: Joey Waronker on drums, Mauro Refosco on percussion, Godrich on guitar, keyboards, vocals, and percussion, and Flea, of course, on bass.

The exact mechanics of the compositional process is difficult to decipher precisely, apart from the fact that many of the tracks had their genesis in group jams, but let’s face it: most people are going to see it as a Thom Yorke album/Radiohead off-shoot, despite the fact that many of the rhythms and synth parts sound very similar to those on Godrich and Waronker’s project with FEMME‘s Laura Bettinson, Ultraísta.

Opening track ‘Before Your Very Eyes’ does little to dispel those comparisons, although its skittering, almost funky (!) rhythms also suggest an offcut from “The King of Limbs”; which in this reviewer’s opinion is praise so faint it’d require a team of skilled archeologists to excavate the last remaining traces of positivity.

Lead single ‘Default’ evoked a similar feeling upon first listen, but has since proved to be even more of a grower than Nick Cave’s morning mast. As the icy verse shifts into the warm synth waves of the chorus, it all just clicks. Thom, meanwhile, sounds like he’s fallen to temptation: “The will is strong / But the flesh is weak / Guess that’s it / I’ve made my bed / I’m lying in it”. Although he claims it’s “eating me up” at the song’s close, he sounds a little pleased with himself. Naughty bugger.

There’s a hint of ‘Myxomatosis’ (the song, not the debilitating rabbit disease) to ‘Ingenue’, which bounces a squodgy bassline off rhythms that seem to drip from the ceiling, and more distintive beats are evident on ‘Dropped’, where Waronker’s writing credit probably explains the unusual six-beat time signature – although it’s the way the song moves from staccato pulses to a driving legato bassline that makes you really swoon. However, when it moves back into the verse the momentum is sadly lost. Apparently Flea taught Thom to surf while recording this album (a somewhat hilarious image) but while ‘Dropped’ comes in waves, they’re never quite as big as you’d like them to be.

It’s left to ‘Unless’ to provide a real high. A restless track that constantly feels like it’s about to open up a vortex, it feels loose and free where other parts of the album are over-cooked. “I am weightless / I am rust / I couldn’t care less,” admits Thom. Whatever they gave him before recording this they ought to give him more frequently, as the whole thing has that oxymoronic exploratory restraint that marks all his best work.

Sadly, the rest of the album fails to maintain that standard. While the acoustic elements of ‘Judge, Jury and Executioner’ and the bass rips and off-kilter guitar lines on ‘Stuck Together Pieces’ add decent contrast to the record’s dominant electronic elements, the tracks themselves are nothing to write home about. While things do get more interesting on the Burial-aping title track that closes the album – an enjoyably haunting way to finish proceedings – the rhythmic click is way too loud in the mix and distracts from the skeleton of a beautiful song. It does, however, feature the most intriguing lyrics on offer: “A penny for your thoughts / They’re spaghetti / They possess me / I’m trying to be a thought killer / They come back to bite me”.

Yet these only highlight the fairly unadventurous wordplay elsewhere. There is nothing here that lyrically matches (nor musically, in all honesty) the violent desperation of tracks like ‘Black Swan’, ‘Skip Divided’ or ‘Harrowdown Hill’ from “The Eraser”. Perhaps too many cooks ran amok while concocting this particular broth. Or perhaps, as Thom ruminates on ‘Before Your Very Eyes’, “Time’s fickle card game” is catching up with him. ‘”Amok” is a decent hand, but one that folds on the river. We can only hope he goes all-in next time round. 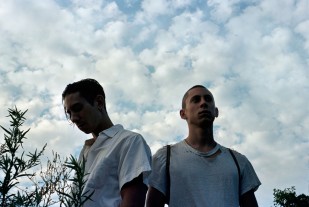 inc. is the brainchild of LA-based brothers Dan and Andrew Aged. They may look like they have the same personal stylist as Peter Andre, but their debut album "no world" is a slice of minimal R&B with a new jack vibe that sounds smoother than a porn star’s privates. The brothers have worked as session musicians for artists like Pharrell, 50 Cent and Raphael Saadiq, and it seems that they learnt a few tricks from these heavyweights. The fact they started out as producers and session players also gives "no world" the aura of an album made by studio hermits that have effortlessly tuned into a style that inspires them. It's been well received by many critics, but a lukewarm review in Pitchfork pushed the band to unleash a Twitter tirade, telling the blogsters they "need a mission statement, no one knows what you are about. cause its not music. or culture. or progress". They proceeded to ask them to "remove any word you have ever said about us". Spicy. The duo are clearly fixated with the sound of the eighties, but this is offset by a modern edge (such as trap-style speedy hi-hats) that saves their music from becoming a pastiche of that decade's urban soul. The stand out track on the album, ‘Lifetime’, bears the hallmark of this obsession, its old-school groove reminiscent of artists such as Bell Biv Devoe and the perfect soundtrack for seduction. It does include the line "I can see a lifetime in your eyes" though, which in contrast should not be used when trying to impress the opposite sex unless your target market has a particular penchant for cheesiness. The release of the album is well-timed, considering the current resurgence of slow jam R&B. Artists such as Miguel and Frank Ocean have recently achieved worldwide acclaim with their experimentations in the sub-genre, and fans and artists immersed in the scene are multiplying by the minute. However, it lacks the lyrical finesse of Frank Ocean's work and is slightly low on hooks and memorable melodies. Still, the album's whispered vocals and layered soundscapes create a smoke-filled ambience that is difficult to dislike. Stick it on, sink back, and see what we mean...
Read More