When I heard that Oxford’s finest had released an app, I was optimistic it would be more than Just an OK computer game. Could this be the final piece of the Radiohead jigsaw falling into place? Unfortunately, it turned out to be something of a let down that swiftly left me climbing up the walls.

At the start you find yourself in limbo as, little by little, you creep about a landscape dominated by polygonal shapes resembling treefingers, black stars and weird fishes. To control you tilt or rotate the screen, and you can also draw strange shapes with your fingers. What difference this makes is, however, difficult to fathom – at times it’s hard to tell where I end and the CPU begins. I also found navigating the bends a little difficult and frequently had to sit down/stand up.

At some point you see a red ball that appears to be some sort of supercollider – if you crash into it the screen breaks into pieces and you fade out. It’s lucky, therefore, that you appear to have an airbag and survive the crash, as it simply takes you to the next level. How do I defeat this terrible red ball? Bulletproof… I wish I was.

I hate to get the knives out but while Polyfauna looks great, after the first few levels there are Just no surprises (then again, I only played it for twenty minutes so there’s a chance I might be wrong). It would be great if you could level up to get fitter (and thus happier), but if you’re looking for linear gameplay then prepare to be left high and dry. Radiohead producing a truly brilliant game? It was a nice dream while it lasted, but Polyfauna Just made me want to go to sleep.

Some interesting landscapes and lightning effects are soured by occasionally glitchy textures and poor framerate. Is everything in its right place? At times it’s hard to tell.

As a Radiohead fan, offcuts from The King of Limbs are all I need. Although some sound effects wouldn’t go amiss.

You pointlessly wander around and occasionally crash into a red ball. Also there’s no global leader board for high scores. Or scores.

It’s possible I will “play” it again.

Polyfauna is available on the app store for zero dollars and cents, and is also available on (paranoid) android.

Living in the Past with the Rewind Radio App 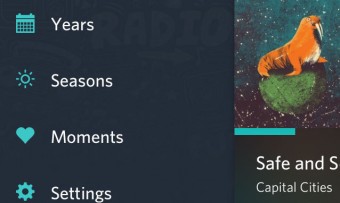 The first app we've seen in an age which isn't completely useless puts a nostalgic musical time machine at your fingertips...
Read More