A strange duet between two of New York’s most distinctive voices; while both of them are eminently listenable there is a sense of autopilot about ‘Love + War’ that means it’ll sound cool for about a week before everyone forgets about it. Nicholas Burman

Slightly quirky and undeniably catchy, Elle Exxe’s latest single comes complete with a video poking fun at the pressure on pop stars to present an overtly sexual version of themselves. It’s a great vid, but really ‘Lately’ is all about that unstoppable barrage balloon of a chorus… Kier Wiater Carnihan

Another track which fits perfectly with the video, although for a very different style of song. ‘Dallas’ is a pensive, claustrophobic composition streaked with dissonant, wraithlike drones, which offers an intriguing glimpse of her debut album released next week. KWC

It’s sometimes hard to distinguish between a lot of these EDM-infected trap tracks, but ‘Hollowtip’ stands out thanks to its frankly ridiculous percussive edge, sounding like a landed fish flapping about in a bucket. Which is meant as a compliment. KWC

The (still living) ghost of Pharrell looms large over the beat here, and indeed even in the pretty lacklustre lyrics. Chance blows Purp out the water, largely by managing to take the track about as seriously as it should be (i.e. not very much). Little here begs for a rewind but it will make a few late night cocktail bars a bit more frisky. NB

Continuing Blanco’s expository work around drug-fuelled nights out, ‘High School Never Ends’ is noticeably full of regret, not just in the diary entry lyrics but also in the string laments and melancholic key. On paper it’s a mess but somehow the mosaic approach to storytelling is both as sad as the accompanying video and revitalising, promising that Blanco’s continuously experimental approach is set to make a pretty affecting upcoming LP. NB

I find Paul Simon a continuously tedious presence for absolutely zero reasons; it’s just one of the many prejudices I have. I appreciate the storytelling technique displayed within, and it’s sort of clever to start a testing analogy between backstage areas at venues and a deeply unequal society, however, when I stop and think about this analogy, I remember I have just repeatedly listened to a song about a fucking WRISTBAND. NB

I CANNOT LISTEN TO ANY MORE WASHED OUT PRODUCTIONS. NB

The cheating male begging his boo for forgiveness is a trope in soul music as old as heartbreak from the female point of view is, and D.R.A.M. lives up to this typical male syndrome as much as possible. The beat and solid vocal delivery make ‘One More Chance’ very listenable; unfortunately lines such as “I got on bended knees about the girls I bended over” make repeat listens increasingly icky. The key to saying sorry is that you have to mean it; by the sounds of it D.R.A.M. wants to have his cake and eat it. NB

A blazing bonfire of hardcore here, as Greek outfit Sarabante channel the current chaos and suffering of their homeland through an extremely loud filter. It’s the drums that really rule this one though, sounding like a million mic-ed up heart palpitations at once. KWC

I was lucky enough to see Catalonian quartet Seward play the beautiful St Pancras Old Church recently. It was an industry showcase, which is not normally the easiest setting to encourage crowd response, but the band’s flamboyant, mercurial performance (and occasional wind-up toy solo) had the audience eating out of their hands. Before the show they even encouraged the sound engineer, who’d they’d just met, to improvise and experiment as much as possible, making for a truly one-off experience best described as a free jazz interpretation of Arcade Fire. ‘Sweet Kick’, from their imminent new album on Naim Records, manages to capture some of the band’s magic, but I’d recommend catching them onstage for the full Seward experience… KWC

We finish this week with some effervescent synth warbling courtesy of Pittsburgh’s Troxum. The continual rising scales of ‘Hexalith’ build an anticipation that, though never quite satisfied, remains engrossing throughout. KWC

Single-Minded: Doc Brown and Verb T are Glad All Over Again 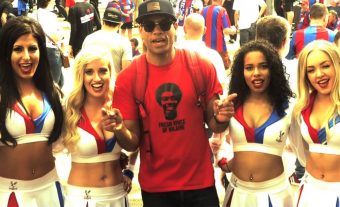