From ‘Golden Boy’ to ‘Diamond Girls’, get glitzy with this week’s finest singles…

Nick already flagged this up in when he coined the term ‘minimal(ish)’ last week, but it’s worth taking any opportunity to post Alex Smoke’s echoing electronics and shadowy atmospheres (not to mention that gloriously explicit cover art). Kier Wiater Carnihan

Most people have caught up with the Tri Angle aesthetic now, which is weird because suddenly Tri Angle releases seem quite standard whereas once they stood out from the pack. Not that that makes this track any less hard-hitting, though if metal gets anymore incorporated into electronic music everyone is going to have to admit Skrillex did get to that idea first. NB

The production is nice but the tune itself sounds a bit like a holiday advert – and the video doesn’t help to battle that sensation. NB

No surprises this is picking up a lot of support, as it’s instantly entertaining for all the right reasons. Let’s see if this The Square kid can keep up the sot of quality his fellow South Londoner Novelist has. NB

I’m definitely on the lower end of the excitement scale when it comes to the return of LCD Soundsystem. This track on James Murphy’s DFA Records showcases the sort of sounds LCD always reached for but stayed too clean to ever really inhabit. Shame it’s about 8 years too late to the party. NB

This has the potential to be an inspired collaboration, but while ‘Gardenia’ is a decent enough driving tune it struggles to get out of second gear. Oddly, in a week when David Bowie’s impression of Iggy Pop went viral, Iggy’s vocal sounds uncannily like an impression of David Bowie. Sadly that’s about as close as it gets to the genius of ‘Blackstar’. KWC

While insular rock purists are getting their knickers in a twist about Kanye recording a David Bowie covers album, he’s just put out his best track in ages, thanks in no small part to Kendrick Lamar’s guest appearance. Funnily enough, Bowie wasn’t a fan of parties in L.A. either; he once called Los Angeles “the most vile piss-pot in the world” (“The fucking place should be wiped off the face of the earth. To be anything to do with rock and roll and to go and live in Los Angeles is I think just heading for disaster”). I reckon he’d probably have been a fan of this though. KWC

LUKA – Not A Word

Not the most interesting composition ever, but good lord this guy knows how to produce a great bass tone. The wordless vocals seem fairly superfluous beyond providing counterpoint to the low end, but when the low end sounds this good, who cares? KWC

When I saw PJ Harvey perform tracks from her new album recently, this one struck me as the most similar to those off Let England Shake. Which makes it seem like a bit of an odd lead single for an artist who usually revels in changing tack between albums, but the repeating refrain towards the end is definitely built to stick in your head. KWC

Single-Minded: Le Millipede introduces us to the 'Neue Welt'... 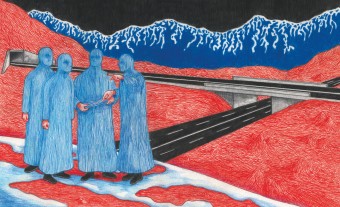 We take a trip to Le Millipede's 'Neue Welt', stopping off to admire Big Ups' 'National Parks' and Shannon & The Clams' 'Bog' along the way...
Read More