As soon as Young Fathers announced the title of album number two, Twitter was ablaze with people saying it was anything from silly to ignorant. However, to deny Young Fathers the capacity to approach socially conscious themes betrays the notion that they’re approaching it from ‘a wrong point of view’. If the recent explosion of popularity for Kendrick Lamar has proved anything though, it’s that the charts can accommodate, and magazines and the general public can discuss, socially conscious music on the artist’s terms. The UK does seem to have a condition to this though; that acts who can approach those subjects have to be foreign.

Is this because an artist from the UK may hit the particular nails of the UK’s own problems a little too much on the head, compared to the sense of and very real geographical detachment from narratives in, say, America or Africa? Neither is White Men Are Black Men Too a Viet Cong scenario, i.e. it’s not a reactionary title built from a joke that isn’t particularly funny, it’s from a band who have pretty consistently dealt with nationality and identity. White Men Are Black Men Too is not an assertion, it’s the start of a conversation.

Young Fathers’ debut, DEAD, dealt with the themes outlined in that simplistic header, from the “AK47 take my brethren straight to heaven” refrain of the opener, to the final phrases in ‘I’ve Arrived’ (“Checkpoint chale/Driving in a hearse”), book-ending intertwining references as dissonant as the Angolan warlord Dede Macaba, spending days drinking down sorrows, and non existent parental figures (“I was born to be the better part of him”). It was this attention and care spent over the detail of the content that made DEAD one of the musical highlights of 2014.

While that album opened with pessimistic imagery such as “I run like someone’s pulling me back” and “Don’t sleep too long you might miss your train,” the opener here, ‘Still Running’, sees the band in more confident mood. A whisper introduces the record – “here’s another ticket” – before the stomp of the percussion pushes forward to cries of “My time to enjoy life / My time to ignore life […] / Fire’s what you’re under / Still runnin’,” in the part gospel, part spoken word vocal combination which is so idiosyncratic to the Glaswegian three piece.

We also find them in more obviously political territory: “Ninety nine percent are waiting at the gates / Hate the motto / Pay up come back tomorrow / Suck it up like you fucking need it.” There is also a strong religious presence throughout once again; one of the first lines is “Tonight I don’t love God”, and that sets the personality of the inquisitive, sinning, regretful and confused soul of the record.

Musically, White Men… sees them tying the musicality into a much tighter sonic quilt than previously. Where DEAD lost momentum in parts, here they seem to be digging into the spirit of their electric live performances much more, maybe a side effect of writing on the road, under the attention from fans and media alike, as oppose to being relatively isolated. The result is a more cohesive body of work.

The real first kick comes midway through ‘Feasting’. It sounds like a mix of war march, siren song and blues track. Around a shuffling rhythm builds winding keys, preaching vocals, distant chorus chants and bursts of electronic flourishes. As we noted in the singles column when ‘Shame’ was first streamed, they seem a lot more interested in forming atmospheres than identifiable tracks. DEAD wasn’t exactly Katy Perry territory, but WMABMT finds them being playful with endless snippets of percussion, vocal samples and musique concrete techniques which places a bit of warmth within the industrial structures of the ever looping drums and dense vocal deliveries.

The race relations topic alluded to in the title comes out most clearly in ‘Old Rock n Roll’: “I said I’m tired of playing the good black / I’m tired of having to hold back / I’m tired of wearing this hallmark for some evils that happened way back.” This is really the central anchor to the theme around identity running throughout the record. “I’m just a man / On the verge of being the man,” they assure themselves on ‘Liberated’, after listing a row of offences which keep them out of heaven on ’27’, but before the lines “Call me John Doe / Let the good times roll” (in ‘John Doe’) casts up visions of someone whose time has already come and gone and is already forgotten, or unidentified.

Bringing the themes full circle, the album wraps up with the relatively sparse but ultimately uplifting ‘Get Started’. Much like the ‘I’ve Arrived’ finale on DEAD, here the repentant tone creates a cleansing sort of effect, after the previous eleven tracks where imagery of Biblical damnation and African Jujus condemn the protagonists.

I can’t quite tell if the religious elements are there from a critical position or a deeply personal and therefore ultimately celebratory and self-saving one. It often feels like both, and like so much of the Young Fathers project it’s wide open for interpretation. Many of the lyrical themes within the album could easily be considered duplicitous. The route the album takes you down depends as much on your approach as the creative intent.

No matter what though, the conclusion should really remain the same in each case: ultimately WMABMT is an uplifting, partly enlightening experience. The magpie conglomeration of styles means they fit into the heritage of PiL and The Fall just as much as soul and trip-hop tropes.

The dense vocal patterns and the sometimes obscure – purposefully so – lyrical content might make the album hard to get into on first listen, but the sheer emotion of the music should see you through enough times to make this an album which gets under your skin. It’s a record that speaks with you, not at you. And that’s the best sort of conversation there is. 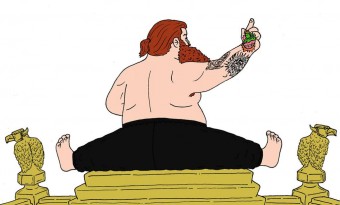 Action Bronson's major label debut 'Mr. Wonderful' finally arrives, but is it strong enough to satisfy those who only know him for his quirky internet antics?
Read More