Murder, She Wrote is an American television mystery series starring Angela Lansbury as mystery writer and amateur detective Jessica Fletcher. ‘Bobby Bitch’, the lead single from the Shmurda She Wrote EP, meanwhile, is probably one of the least fun hip-hop records records I’ve heard all year. Granted, I’m a little out of my comfort zone here, but the lyrics could’ve come from pretty much any pop trap rap record from the last ten years, and the beat doesn’t do anything. Do expect ‘Bobby Bitch’ to be scrawled on T-Shirts in Camden any time now.

Eaves – As Old As The Grave

Despite all of Eaves’ proclamations of misery and being “homeless beneath the Devil’s moon”, there are Johnny Cash levels of self-mythologising at work here. His guitar playing is technical enough and the opening harmonies are pretty, but I’m just not convinced that a guy from Leeds who’s ended up doing a Jimmy Page impression has ever witnessed a “bullet to the brain.”

Gareth Malone’s All Star Choir – Wake Me Up

Gareth Malone has of a history of being the harbinger of emotion porn for Britain’s Christmas TV schedule. Here he brings together a few Saturday night celebs (a few from the Coronation Street cast, a guy from Strictly Come Dancing) to do a choral version of last years Avicii mega hit ‘Wake Me Up’. While I feel a bit tight knocking a charity single (the proceeds will be going to Children In Need) there is an uneasy clash of emotions presented, in between watching ill children and crying mothers in hospitals while John Craven says “we’ve all worked incredible hard on a record, and most of us have never sung before, now go out an buy it.” WOW, well done John Craven, how many times do you want a pat on the back? Call me old fashioned, but I don’t think buying a rehash of an unbearable Avicii record is the best way to go about giving to charity. If you want to give to charity, do it off your own back – and then demand every overpaid and over-exposed celebrity who appears on your TV screen every week of the year pays their tax. If there’s one thing which isn’t going to make the world a better place, it’s novelty singles.

Hopkins brings us a very mellow re-imagining of his stand out Immunity album on this EP. Recorded in Iceland, with added dreamy vocals from Braids singer Raphaelle Standell and King Creosote, it follows the lineage of his movie soundtrack work and collaborations with the previously mentioned Creosote and Brian Eno. While it’s not the most instantaneous record in the world, its depth and classical leanings make it a worthwhile Hopkins curio none the less. Just think, in one year, Hopkins has gone from producing a Coldplay album to taking a mega techno DJ set around the country, no wonder he needed a bit of a sleep.

Lamar was always going to face a bit of difficulty on his second record, not least because every music critic in the world treated his debut with the same reverence as that of a nun witnessing the return of Jesus Christ. Despite complaints from certain quaters that it’s a bit ‘popp’y,  ‘i’ is a fun, old school breaks influenced hip-hop record, not an understated fact, denoted by the appearance of Ronald Isley on vocals and in the video. While I’m not the biggest Lamar fan (although there’s a lot of them), he has at least proved that mainstream pop and rap music can be intelligent and get its audience talking about heritage and interesting ideas.

Pharrell is the Spring Breakers of music at the moment – somehow getting away with inserting breasts and beady eyes into every video under the illusion of artistry. What ‘It Girl’ and the album it comes from actually is is Marvin Gaye but with all the heart and soul pumped out of it and commercial profitability and memes pumped in. A lightweight soul funk number that goes on for three minutes too long and is forgotten about as soon as it finishes.

Ten Ven and Ripley have managed to take everything that’s good about Zebra Katz and filter it into a boring, ice synth house track. I don’t think I’d mind the tune so much if it didn’t seem to be taking itself so seriously.

This is how the YouTube description talks about this song: “Originally from a multimedia and performance background, Zebra Katz can paint bleak stories of sex and tragedy…”

These are the lyrics:

Despite that, it’s clearly a tune Katz has delivered a top line to and not a Katz tune the others have produced, and if its bouncy beat was given a brief outing on a night out you’d likely forget about the fact that it means absolutely nothing.

YAY! A singer/producer you can always count on. The LA via Aus artist may never top the heady heights of the unbearably catchy ‘Romanticise’ but you can always rely on her for a bit of tongue in cheek neon fun, a couple of Madonna’s ’80s beats and enough bravado to keep it firmly away from the irony brigade. 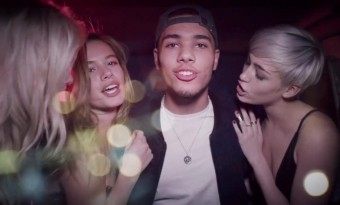 When Counting Crows - Counting sodding Crows - release one of the least offensive singles of the week, you know you're in trouble. Jonny Abrams casts his eye over this week's singles, and it's not a pretty sight...
Read More