It hasn’t got a tracklist, a release date or even a title, but PJ Harvey’s new album has already provided perhaps the most candid window into a major musician’s creative process to date. Having already allowed fans to watch recording sessions through a two-way mirror at the beginning of the year, her latest live performances offered yet more insight into the formation of her follow-up to 2011’s Mercury Prize winning Let England Shake.

Billed alongside the similarly well-decorated photographer Seamus Murphy, tonight’s event is ostensibly a book launch – although this sold-out Royal Festival Hall show bears little resemblance to your usual free-wine-and-nibbles publishing shindig. The book in question is The Hollow Of The Hand, a photography-meets-poetry travelogue through Kosovo, Afghanistan and Washington D.C., forged from journeys Harvey and Murphy embarked upon after the release of Let England Shake. If that album was an investigation into Britain’s blood-stained history of conflict, then the next one appears to aim at a similar target through a much wider scope.

Tonight confirms that PJ Harvey has put in the leg-work with research if nothing else. The evening is split into three sections, each of which offers a triptych of film, photography and performance: first a short film patching together random scenes from the pair’s excursions, then a slide-show of photography from the relevant region, and poetry recitals by Polly. These are intermingled with songs performed alongside erstwhile collaborator John Parish and Gallon Drunk frontperson (and occasional Bad Seed) James Johnston.

Tonight’s compère, the journalist Anthony Loyd, tell us there will be ten songs in total, and it’s tempting to infer they will constitute part or all of the upcoming album. However, while the anticipation that ripples through the crowd following this announcement has to wait to be sated, any impatience dissipates almost as soon as the first film begins to roll. As we watch Harvey poking about through war-ravaged Kosovan ruins, interspersed with surreal footage of an old man balancing water on his head during a local festival, it becomes clear that tonight is about much, much more than music.

Seamus Murphy’s photography is, frankly, astonishing. From an amusingly surreal image of two young looters and a remarkable perspective of an Afghan quail-fight, to tremendously sad, thankfully non-gratuitous photos of dead air-strike victims, we are afforded one breath-taking, thought-provoking view after another. They don’t just document the carnage wrought by war, but the humanity that perseveres despite it.

The jaw-dropping display is contrasted by Murphy’s laid-back commentary. It’s hard to imagine he talks in front of such vast crowds regularly, but his manner is so low-key it’s like listening to your uncle talk you through his travel snaps (assuming your uncle habitually holidays in war zones). He admits to feeling a little nervous about taking a ‘national treasure’ to Kabul and beyond, but is almost blasé about the dangers he himself has faced on frequent trips to Afghanistan, not to mention the areas of Washington D.C. they were warned not to visit.

This extraordinary photographer may come across as just an ordinary bloke, but there is nothing ordinary about PJ Harvey’s presence. Before the gig my partner, who’d never previously seen Harvey perform, said that it was hard to think of her as ‘a real person’. Harvey does little to challenge that perception, appearing almost ghostlike as she performs with an untouchable austerity of movement, not a word offered to the audience apart from those she recites from her sheaf of poems. Every note, riff and utterance this evening is delivered with measured self-assurance; after almost three decades on the stage, she makes it all look astonishingly easy.

The poems themselves? A mixed bag to be honest, but then I’m very hard to please when it comes to poetry. Still, the impression made by the experiences that spawned them occasionally manages to burn through the sparse and sedate verse. Harvey wisely places herself in the margins, with the best poems positioning the author as an outsider quietly skirting every stanza, an observer who can never be completely aligned with her subject matter. Even the less successful efforts are saved by her delivery – the rhythm and tone is precise and engaging, and her enunciation rings clear throughout the hall.

The mixed media approach makes for a fascinating evening, although the stunning photography sections perhaps soften the impact that the music, when it eventually arrives, might have made otherwise. It’s impossible to know how the songs played tonight will compare to those on the finished album, but one thing seems fairly certain – if you liked Let England Shake, you’ll love this. Which is not to say it’s just more of the same – has PJ Harvey ever offered a double dose of the same long-playing medicine? – but lyrics that rumble with the aftershocks of war are once again packaged neatly in finely crafted, easy-to-digest songs.

The new material differs most in swing and volume. These compositions are often rockier than the more austere, folk-inflected songs on Let England Shake (although ‘The Wheel’ could have easily come from the same songbook), with frequent nods to her beloved blues music – the negro spiritual ‘Wade in the Water’ even forms the base of the evening’s final track, the satisfyingly sultry ‘River Anacostia’. The strident stomp of ‘The Ministry of Social Affairs’, inspired by a derelict former government building in Kabul, is another rousing highlight.

However, while the sound created by the trio on stage is incredible, helped by the venue’s outstanding acoustics, the songs are as hit and miss as the poems (although the pacing and timbre is similarly well-judged). The militaristic blues of ‘Chain of Keys’ fails to fully ignite, while ‘Dollar Dollar’ couldn’t be much duller, its message laid on a little too thick. As a long-time fan who was left curiously un-enamoured by Let England Shake, to me the new songs struggled to trigger the adrenaline pumped out so vigorously by her earlier work.

While she avoids the potential trap of awkwardly trying to evoke a pain that doesn’t belong to her, this muso-jounalism can’t help but feel a little cold compared to both the raw passion of Rid Of Me and the quieter but no less stirring tracks on White Chalk. The intensely personal pieces on those and other pre-LES LPs felt almost unbearably cathartic, whereas her newer music feels at pains to avoid being too intense, obtuse or intrusive, which might risk distracting from the subject matter. Ironically, it could most do with more violence.

Tonight remains a refreshing change from the double-encore tedium of the standard rock concert, but the juxtaposition with Seamus Murphy’s photography emphasises how difficult it is to achieve the same effect through music. PJ Harvey’s songs and poems become documents, interesting yet detached dispatches delivered with a cautiousness that stifles the sense of artistic abandonment of her best work. While Murphy’s pictures fulfil the old adage of painting a thousand words apiece, you can’t help but miss the PJ Harvey who enraptured by capturing the essence of things it’s impossible to photograph. 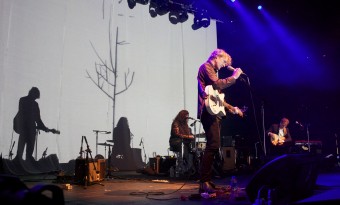 Low's latest London gig has Amadeep Chana reaching for his hanky - once he manages to block out the nearby chitter-chatter at the Roundhouse...
Read More