This week’s new music voyage takes us to Le Millipede’s ‘Neue Welt’, stopping off to admire Big Ups’ ‘National Parks’ and Shannon & The Clams’ ‘Bog’ along the way…

Thanks a lot, Amber Arcades, for making me break my new year’s resolution to give up listening to indie-kraut records. The cooing vocals / Dinger beat formula may be increasingly played out, but this is just too pretty to ignore. Kier Wiater Carnihan

Really liking the Slint-y guitar in the first half of this, and there’s a … Trail of Dead vibe to the shifting structure too. While I spent the duration of ‘National Parks’ worried that it was going to turn all emo at any moment, thankfully that moment never arrived. Big up, Big Ups. KWC

I feel like Courtney Barnett is the Sheryl Crow it’s OK to like; at least for weirdos who don’t think Sheryl Crow is OK to like for whatever reason. Crow never wrote a song about being addicted to instant noodles though, which is the kind of charming slacker touch that’s seen Barnett do so well over the last year. Still, while we’ll be rooting for her to pick up Best International Female at the BRITs (well, her and Bjork), it’s hard to ignore the fact that ‘Three Packs A Day’ is as warmly agreeable yet nutritionally empty as the Mi Goreng noodles she references. KWC

The Spanish hip-hop community is obsessed with auto-tune, Madrid’s C. Tangana and the Barcelona-based Pxxr Gang being the most notable culprits. On ‘Comix’ El Guincho takes plenty of those acts’ trap influences, but adds a Cashmere Cat sheen into the mix as well. I’ve no idea what they’re saying but the track is colourful enough to work as good afternoon music. Nicholas Burman

Harriet – Bring Me When You Go

I feel like I should really hate this continuation of the Alt-J school of math rock, but the harmonies are appealing and around the 2.20 mark there’s a glimmer of something much more experimental with the production, which I wish was a bit more present throughout the rest of the track. NB

Deutsch-Iranian producer Kali returns in conjunction with Mad Decent’s Swick, and the result is a frisky whirlwind of trap that’s hard not to get swept up by. It also comes with a compilation of all those comedy Arabic YouTube clips you’d forgotten about, although there’s a feminist message about religious hypocrisy underneath the laughter, as men throw cash at women twerking in hijabs… KWC

There’s some enchantingly arranged instrumentation on this Moondog-esque piece by Le Millipede, with clarinet, piano and a range of percussion all intertwining nicely. The alte welt seems a pretty cold place these days, so I’m all for relocating to a ‘Neue Welt’ if it sounds like this. KWC

Last time Melrose was on Single-Minded I referenced him to Drake, which I now realise was a very poor slip-up on my part, as listening back to ‘About You’ and now ‘Temporary’, Melrose is a much more claustrophobic, angry MC and producer more in line with Earl Sweatshirt. Essentially the antithesis to nu-man R&B, and all the better for it. NB

Squirming techno goodness only tastes this good when it’s made in Berlin. It’s all about the analogue synths on ‘Follow’, which are spread onto the canvas with malevolent abandon. KWC

Shannon & The Clams – The Bog

A jolly little piece of carnival creepiness from Shannon and her famous Clams. ‘The Bog’ is impossible not to leer along with, so stick a penny in the slot and watch ’em go. KWC

The production on ‘Alive’ is a little clean for my tastes, and the vocals and drums follow modish indie-pop patterns I’m not overly fond of. And yet, the harmonies the song revolves around are so effective it doesn’t matter. Plus the music video is like a miniature version of Sightseers, with way more murders than you’d expect for a song like this. Solid work, Shields. KWC

Nothing about ‘Overload’ should make it work; the house beat combined with wispy vocals and a synth setting verging on pan pipes… yet the track fuses the elements into a nicely atmospheric piece reminiscent of Hot Chip at their weirdest. NB

Single-Minded: Sonny Smith sees all and knows all... 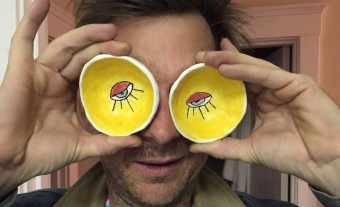 Sonny Smith's 'Ayahuaska' ceremony may be an ordeal for him, but it proves much more enjoyable than the return of Dandy Warhols, RJD2 and White Denim...
Read More