What the fuck is ‘Eagle Metal’ you may ask?

Well, after listening to Fear of Man, the debut album by London-based noise-bastards HAG, you’ll bloody well know what Eagle Metal means. It’s a description that makes total sense upon hearing the righteous and triumphant sound that Fear of Man flings violently through your speakers and directly into your face.

It’s a sound that’s heavy but crisp. Crushing, yet capable of soaring to the heavens riding on the wings of a gnarly bass-wielding bird of prey, hell-bent on causing a bloody great racket.

Fear of Man is an absolute beast of a record, all power riffs and shifting time signatures. The drumming alone is enough to make you stop in your tracks and weep tears of saline joy. Released on January 8th 2016, there’ll be no better way to start off the New Year than poking it deep into your ear holes and letting it nest.

To celebrate the incoming birthing of Fear of Man I asked the fine chaps of HAG – bassist Robin Freeman, singer/guitarist Ian Baigent and drummer Tamas Kiss – a few intimate questions about the record and what makes HAG tick. 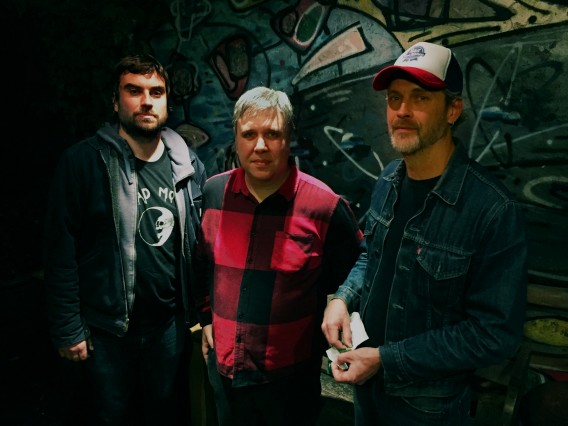 The Monitors: How did HAG come about?

RF: When our previous band stopped Tamas and myself just kept on writing and rehearsing as a two-piece. We wanted someone else involved to move it forward, so I called up Ian who liked what we were doing, dusted off his guitar and got stuck in.

IB: I saw it as an opportunity to drink and hang out with friends, but as we spent more time together in the studio it became clear that we had something great.

The brilliant HAG EP was released back in 2010, what have you all been up to since then?

RF: All the trappings of stardom… Family, work and drinking.

I know Tamas also plays with the band Bad Guys. Do you all play in other bands outside of HAG? If so, how does HAG fit in amongst them?

IB: I’ve been playing in a band called Montana Pete since 1994! There’s been no conflict of interest so far.

How would you describe the ‘HAG sound’ to someone who’d never heard you before?

IB: OK, I’ll give the sensible answer. If you like The Melvins, High on Fire and a bit of Sabbath then you will like HAG.

I’ve read that Fear of Man was recorded at the beginning of 2015, what caused the nearly yearlong delay in its release?

RF: When we finished the recordings we were scratching our heads for a couple of months trying to decide who would mix the album. I approached Scotty Hard who produced and played on one of my favourite albums of all time, Paradise Don’t Come Cheap by New Kingdom. Amazingly he said yes but he was super busy with other projects, so it was a waiting game.

TK: Didn’t we start recording it in 2014 or even earlier?

IB: I was sceptical about waiting, I wanted to just get it done but Robin dug in his heels and got his way. I’m glad he stuck to his guns because Scotty put a lot of love into the record.

How did the recording of Fear of Man go, was it a smooth process?

RF: It was pretty straightforward because we rehearsed a lot. We had strong ideas on how to get the sound we wanted. It was all done over three weekends.

IB: Time and money were limited but we got there in the end. I wish I had been more prepared with the vocals. Scotty Hard did an amazing job mixing the voice… Thank god!

What was it like working with the legendary Tim Cedar (from the frankly awesome Part Chimp) at Dropout Studios, how did he come to be involved as producer?

RF: He’s a tyrant! He made us do press-ups in between every take.

Tim is great to work with, very supportive and up for trying out new ideas. We have known Tim for quite some time through rehearsing and recording at Dropout, he recorded the first EP so he is familiar with what we do and tolerates us, which helps.

IB: I recall Tim eating a lot of popcorn.

I was surprised by how intense the record is and how many stylistic changes there are within each song, how did you go about writing the album?

RF: It’s a fairly democratic process, someone comes up with a riff, we’ll jam it for a bit and if it is working we add and take away bits until everyone is happy.

IB: It’s hard for me to know when a song’s done and I wish I could play more simply but I just keep churning out riff after riff. I think I have some kind of music attention-span disorder

Were there any particular influences on the record?

TK: Definitely High on Fire for me, I think they are one of the best current metal bands in my opinion.

IB: Lots, I mean everything you listen to gets absorbed and recycled into your music, it’s unavoidable. I find comedy a big influence, Louis CK and Doug Stanhope in particular.

What are the themes of the record (if any)?

IB: The stupidity of man, hence the title of the album. It blows my mind what people do to each other in this day and age, we seem to have regressed as a species.

The album artwork is bloody excellent (I also love the artwork for the HAG EP), can you tell us a little about that?

RF: The artwork was done by our friend David Mitchell, who’s a great artist. There are more drawings of different themes that will be included with the album. Definitely something for my son’s future school show and tell… 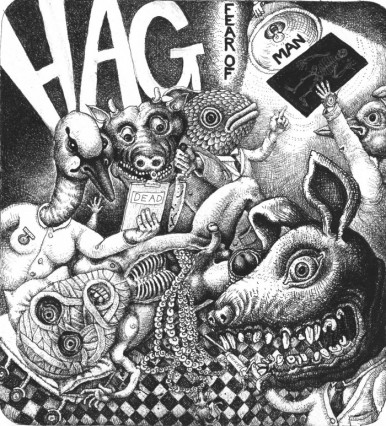 The album will be released through the newly formed DNAWOT Records, how was it decided to go with them?

RF: They are our kind of people and really enthusiastic about what we do. We agreed to put it out with them digitally for now and we are still looking into doing a vinyl release at a later date with them or another label, we’ll see how it pans out.

TK: We have emailed so many labels and sadly I have to say we received no response at all. Quite disappointing, a reply would be nice saying “no thanks, fuck off keep on searching elsewhere…”

RF: It’s the English no… silence.

Fear of Man is coming out on download on the 8th January, do you have any other plans for it?

RF: Download only on the 8th of January; the vinyl will come after but no set date for that yet.

TK: In 2016 we’d like to put together a small UK tour, then Europe for a bit. Then self-combust at the end of it and be reborn as bricks or stainless steel objects…

You’ve played with quite a few great bands in your time, including an absolutely incredible recent gig with Hey Colossus and Blown Out; have you a favourite gig you’ve played so far?

RF: That was a great night and gig, definitely one of the better ones.

We once played in this lady’s front room in Lancaster with Gnod and Black Bombaim, it was just the bands plus three other people, which was intense! Then a couple of days later on the same tour we played with Karma to Burn in Paris to a full house, both very different but fun shows.

Are there any bands that you’ve played with that we should be checking out?

RF: Henry Blacker are a great, but unless you’ve lived under a rock you have probably checked them out already… [Indeed we have – Ed.] If not, do!

Also, we are playing a show on the 27th of February next year with a French band called Fiend who are awesome.

If you could play with any band or bands who would they be?

RF: I have written to Phil Collins a few times asking if we can be his backing band. A bit like the Melvins /Jello Biafra; Jelvins thing but with HAG/Phil Collins; PHAGLLINS. No answer from him yet, but I’m confident he’ll get on board.

TK: Phil Collins is about to return to show business!

I hear people are signing petitions to prevent the comeback.

I urge your readers not to sign the petition, as we might have to negotiate with Limahl.

RF: HAMAHL! That sounds catchier let’s get him instead!

With so many excellent ‘heavy’ bands knocking about at the moment and playing together on similar bills, do you feel that there is a ‘scene’ developing or a sense of community?

TK: There is always a scene but always changing like an amoeba.

IB: I hope it’s more of a community; a scene makes me nervous because of the expectations placed on you to fit a certain criteria. Better to be free and easy, who knows what direction HAG will go?

What’s next for HAG?

RF: We have a couple of gigs booked early next year that I’m looking forward to and we have a few new songs that are pretty much ready to record for the next release.

TK: More riffs, gigs, tours, then we are going to sacrifice Ian to the lords of metal: Manowar.

Fear of Man will be released digitally through DNAWOT records on the 8th of January. We strongly recommend you get yourself a copy, it’ll totally blow away the post-seasonal blues and help learn you the true meaning of ‘Eagle Metal’.

Boy Better Know: A history of Lahndahn lingo in pop with Chas & Dave 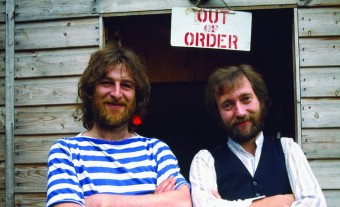 With colloquialism back on the agenda, we thought it would be worth chatting to the duo who helped put community lingo into the pop culture lexicon: Chas & Dave...
Read More