Right by now I know how much we trust each other, yeah? Well to be honest I don’t trust you. But I know you trust me. Sucker.

Only joking. I love you really. Give me a cuddle.

If when watching said new band I have – through my raging, all-consuming alcoholism and crushing resentment – finished whatever beer is in my grubby mitts and can resist the urge (oh the beautiful, sticky urge) to go to the bar for the rest of the set foregoing another tasty, delicious beer for fear of missing a single note, then I deem the band to be a success.

In the case of Evil Blizzard’s set at The Lexington, I went to the bar twice.

Either I‘ve accelerated my drinking and it’s genuinely becoming a problem (it isn’t. Well, not for me anyway) or Evil Blizzard and I just aren’t meant to be. Answer: the second option. Evil Blizzard were just not my heavily whiskey-laced cup of tea.

Theoretically they should’ve been right up my grimy, piss-smelling alley. For one they wear silly Halloween masks and I bloody love a gimmick me. Just call me William Castle. Secondly they’re a five-piece featuring four bassists. FOUR BASSISTS! How can that not be great? How indeed?

I was hoping for a four times four (stringed), Death From Above 1979 cuboid bass assault and robbery. Raw, dirty little fuckers stabbing at my lugholes like guitars were never invented. All mixed together in a Hey Colossus style drone/noise.

Unfortunately Evil Blizzard were more Obnoxious Drizzle, not quite Death From Above, but a mildly annoying summer shower. Sadly I found their sound un-exciting and ultimately dull. Call me a square if you will (call me something, please!) but that’s just how I feel.

Starting with the wanton-trippiness of ‘Sacrifice’, the songs appeared directionless, lost souls scrabbling about amongst the discarded plastic pint cups at my feet, lost in repetition hoping that a groove, at the very least, may emerge from the plodding fog.

People were enjoying it and bless them for trying. It all just felt a bit Status Quo safe boogie-woogie or, worse, Kasabian psychedelic dad-rock. I found no emotional foothold in the slippery high-pitched squawks emanating from the drummer’s masked mouth.

The lyrics of ‘Slimy Creatures’ consist solely of “slimy Creatures, ugly features” repeated over and over. John Cooper Clarke eat your heart out. In other hands this simplicity could be a good thing (see The Amazing Snakeheads’ ‘Here it Comes Again’ for an example), but here it just felt flat and lacking in ideas. At first it made me chuckle, but after a while it made me long for a dictionary to throw at the fuckers.

Halfway through the set a giddily dancing lady looked me straight in the eyes, my cold dead eyes, her own filled with squidgy tears of enjoyment, desperately beckoning me, rallying me to join her and the middle-aged stomping crew, and stop po-facing about like a poncey London twat and let go. But I couldn’t, I just couldn’t. She was disappointed. Nothing in the music made me want to rustle my bones.

I took that as my cue to move to the back of the room and get another pint.

Equally disappointing for a band wearing ‘scary’ masks was that they were tediously well behaved. I was expecting B-movie horror shtick and possible antagonistic forays into the audience, a night of aggressive Evil Dead-style relentless ghoulishness. What I got was more Scary Movie gurning.

Weirdly the singing drummer looked just like Jeffrey Tambor from Arrested Development. Which was frankly the most disturbing part of the eve. In the masked band stakes they have a lot to learn and should take a lesson from the frankly awesome, sadly defunct Kong (they were fucking tremendous OK, that’s just a fact).

Set closer ‘Whalebomb’ nearly reached a kind of dubby groove but ultimately didn’t have the impact to lure me in.

Frustratingly there were hints of noise rock hidden amongst the pleasantries. Every now and then a song lurched into a riff that made me hopeful that a corner had been turned and the bouncy psychedelics left behind. But it was a lie. If a corner had been turned it just led to another corner, then another, then another. Trapped in an endless corridor of corners. Might sound great but is a right fucker to navigate. Like being stuck in an endless, colourless Rubik’s cube for all eternity. No dice.

Teleman @ The Fleece, Bristol (with Gentlemen & Why We Love) 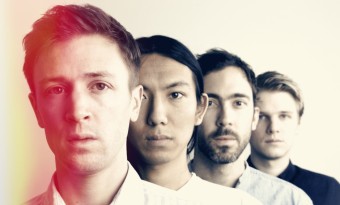 Teleman﻿ are building up a right head of steam, and continued to do so in Bristol recently; with Gentlemen﻿'s prog stylings and the jangle-tastic Why We Love﻿ helping bring things to boiling point...
Read More