Times have changed in the four decades that Chas & Dave have been active, but the London ‘Rockney’ duo have not.

Before embarking on a career under their own names they were prominent session musicians, associated with everyone from The Beatles to Labi Siffre and his Eminem-sampled track ‘I Got The…’ A BBC documentary on the duo from 2012 is well worth a watch, and the duo are currently back on the road.

With colloquialism back on the agenda – from the second wave of Grime to Sleaford Mods’ spoken-word diatribes – we got on the blower to Chas Hodges of the band who said no to impersonating Britain’s transatlantic cousins and helped put community lingo into the pop culture lexicon.

Hi Chas. I wanted to start with this, The Rolling Stones – Route 66 (1964), one of the first really famous bands from London, this is from one of their first records. What’s interesting is this obviously isn’t an original track and Jagger is pretty much doing an impression of an American accent; it wasn’t very cool to sing with a British accent at this time was it…

Not really, that’s why I decided it was time for me to sing in my own accent and that’s when I rang up Dave years ago and spoke to him about the idea. That’s one of the main reasons we got together, so that we could do that.

I wanted to pick ‘Gertcha’ (1979) from your own catalogue, as it’s probably the Chas & Dave song that non-native English speakers would struggle with the most (alongside ‘Rabbit’). Do you remember writing this song and where did you get the word ‘Gertcha’ from?

Yes, it was one of the first ones that we wrote. It was our first Top 20 hit. Some of the songs are collaborations, some of them I’ve written entirely myself, with Dave’s approval, but this was a complete 50/50 collaboration. Both our families used that word, his dad used to use it a lot, and so did my dad and my grandad. We thought it was just a bit of fun but at the same time it needed to be done, because it was an old London word that was dying out and we felt that it should be logged so we put it in. The song consists of all the different ways you can use the word ‘gertcha’.

Where were you born?

I was born in Edmonton, North London. I don’t live far from there now, about half-an-hour North.

The same year as ‘Gertcha’ came out, Ian Dury & The Blockheads released ‘Reasons To Be Cheerful Part 3’. Were you fans of Ian Dury at the time, and how did you view the post-punk, new wave and pub rock revival scenes of the seventies?

He came about after we’d done ‘Gertcha’, then we heard Ian Dury, and we thought ‘yeah’. It didn’t quite sound natural to me, but yeah good luck to him because he’s not singing in an American accent. That’s the number one thing for me, wherever you come from you should sing in that accent. it’s simple, and so obvious to me.

One of the most-loved London songs of the ‘80s was Smiley Culture’s ‘Cockney Translation’, a humorous guide to the London dialect for speakers of Jamaican patois…

I loved it because it was him. You didn’t have to know him to know that that song was him, he wasn’t pretending to be American or pretending to be something he wasn’t, and that’s all I think artists should attempt to be.

There´s been a boom in artists with a strong London accent in recent years such as MIA, Stormzy (playing Bristol in January) and Wiley, the Bow-born ‘Grime Godfather’ – just wondered if you’d heard any of these and what you thought?

I’ve caught a few of those artists, and the change [of accents], but it’s a bit old-fashioned now to say that “oh you’re born within the sound of the Bow Bells [so you have to sound traditionally Cockney]”. I’ve always been fascinated with accents in any case, whether it be a Scouse accent or whatever… and they should all just sing in the accent that they’re born with.

When you start to analyse it you start to listen to it. My main music is ’50s music and american rock ‘n’ roll – that’s from when I was a very young teenager and so rock ‘n’ roll is still in me very much. If you listen to all my favourite rock ‘n’ roll records, you listen to Little Richard and Jerry Lee Lewis and Elvis Presley and their accents are different [depending on] the areas that they come from. They all sang in American accents but they didn’t try to copy each other, and at the moment in general everybody seems to be singing different songs but sounding the same. In the old days, in the rock ‘n’ roll era people like Gene Vincent could all sing the same song but sound different, and that’s because they were being themselves. And that’s what people need to do. But then again I ain’t really bothered what other people do as long as I can do what I want myself.

You’re going back out on tour as Chas & Dave, what’s it like playing together now?

It gets better and better. We’ve always had fun being on the road, but in the old days we had rusty old vans that didn’t have heating in the winter or air conditioning in the summer, always breaking down. You didn’t have insurance because you couldn’t afford it. You always ended up sleeping in the van at about three o’clock in the morning in the freezing cold, staying in ropey boarding houses. Nowadays we got a nice air-conditioned Mercedes, stay in nice hotels, we travel to places where everybody knows our songs and they sing our songs. It’s just a great feeling, like being ambassadors, going round the country and stopping off and giving people joy. My philosophy is they’re all people, if people pay their money to come see us then we’ll play.

A lot of people don’t know you and Dave were the session musicians for Labi Siffre’s ‘I Got The…’, the bassline in the bridge of which was made famous by Eminem…

It was one of many recording sessions, before me and Dave got together, I’d had a career as a session musician and I had a pretty good name. It was great for paying your rent. I did quite a few sessions in the old days, although a lot of them weren’t particularly enjoyable it enabled you to pay your rent and then do what you wanted to do, which in my case was writing songs and getting together with Dave. When we got together I called all the session bookers, told them I don’t play the bass anymore I play the piano or the guitar, I’ve got a partner now who plays the bass, so if you want a bass player give us a call. That’s what I did for the Labi Siffre session, I played the guitar and Dave played the bass, and it just so happened that Eminem picked up on it and sampled a bit of it for his record.

Everyone knows that tune…

It’s one of those things that happens in life. 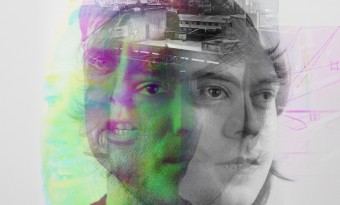 As they prepare to being their sparky, mercurial avant-funk to the UK, we speak to Jean-Sebastien Truchy of Montreal's Avec le Soleil Sortant de sa Bouche...
Read More