At the risk of repeating myself, there’s something you should know about me: I love horror movies.

Not those shit ones where moronic high-school twats are terrorised, nor the found footage dirges. None of that idiotic, formulaic pap.

By the sounds of Summer Tombs, Henry Blacker also like a taste of the black stuff. (Horror that is, not Guinness, though they may like that too to be fair.)

Each song is a bloody standout track with grungy, stoner rock oozing from every pore. Henry Blacker are groovier than the furrowed brow of the Witchfinder General on a particularly busy Halloween.

Throughout, Tim Farthing’s shifty demonic guitar beckons you to look deep into the shadows with its crisp, stoner riffs before Joe Thompson’s fabulously dirty basslines drag you to the cold hard floor, leaving you whimpering in a pile and allowing Roo Farthing’s powerful drumming to finish you off with a swift chomp of the brain and an eyeball gauge for good measure. “Choke on ‘em,” is all you’ll be able to say before it’s all over.

The horror element of the songs seeps in via the threat-filled, malevolent lyrics. Each song seems to deal with different sorts of destruction, physical or rural, all shot through with thick jet-black humour.

The Lovecraftian lyrics of ‘Cold Laking’, for example, play out as some dark unnamed entity forces its way into someone’s country home with only right badness as its intent: “In a cloak made of smoke I am curling my way in.” Tim Farthing’s manipulated vocals allow him to cross the void of a sozzled drunk mumbling terrible nonchalant threats, to a burping throat-shredding, mega pissed off ogre: ”Now I’m dripping from the beams, into your open maw.”

Might sound a bit dark, but this ain’t no goth show and when the lyrics are backed by a fucking righteous noise, well, it’s fist in the air time.

The psychotic ‘Landlubber’ continues the nautical horror theme of Hungry Dogs…’ belter of an opener ‘Crabhouse’ with similar demented humour: “The wind is up, the deck is listing, and your groin is devoured by lice,” Tim Farthing belches, getting more and more agitated as the song progresses. “The cabin boy, locked in the galley, we’re saving him for last.”

The melodic ‘A Plague’ sounds almost pleasant before you realise what’s going on: “How did he get in? He lifts his hand and all of the lights go down.” It’s like a classic ’90s alt-rock hit played by swamp monsters.

Final song ‘Summer Tombs’ is a bit of a change of pace. Slower, more grunge-like and serious in tone, it’s a far more sincere and personal song than the previous seven, which appears to deal with the very terrifying and real fear of facing up to cancer: “They found it, it wasn’t benign / It spread so fast, as if by design.” It’s lyrically devastating and an interesting exploration of real life, practical horror as opposed to fantasy or imagined fear.

“What will we tell the kids? I haven’t the strength for this. Summer tombs, I thought we had more time.”

It’s a bleak way to end the album, rounding off with a sense of retrospection and corporeal inner destruction. The body itself rebelling and closing down. Body horror rather than Hammer horror.

That’s the role of truly great horror, to make you face up to the darkest sides of life and embrace fear. And like all true great horror movies you will want to get straight back to the beginning of Henry Blacker’s Summer Tombs and experience it all again.

Initially the album will be released as a Record Store Day vinyl exclusive (it comes in a truly lovely-looking sky blue) through the shamefully awesome Riot Season (them again). The album will then be released on CD, which will also come with their debut album for good measure, and deserves to be listened to by as many people as possible.

So buy it and force it on your loved ones, well-wishers, work colleagues, beloved pets, hated pets, or anyone standing particularly close to you on the tube making you uncomfortable. 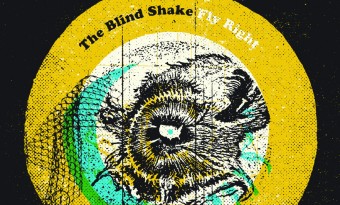 The Blind Shake's last record was a masterclass in musical fury, yet their new mini-album 'Fly Right' is the most fun you can have with your amps on. What gives?
Read More