You really can’t have enough death-related words in your band name in my morbid opinion. Dead Kennedy’s, Napalm Death, Heaven 17. So obviously if you call your band Necro Deathmort you will pique my craggy interest. With thier new album, The Capsule, Necro Deathmort can consider my interest well and truly piqued.

Yes their playful name may conjure up dour images of stoic Scandinavian black metallers, un-humorously plodding away at horror-obsessed crust metal, or rubber-wearing novelty-goons, but Necro Deathmort are, thankfully, a lot more interesting than the stereotype their name suggests.

Well, with The Capsule they’ve succeeded in making electronic music that, whilst sounding nothing like doom, has the same claustrophobic atmosphere and crushing effect on the listener. While the tone of The Capsule is heavy, it’s certainly more minimalistic than Necro Deathmort’s previous records, which are more brutal (check out the suffocating The Colonial Script) or dancey (EP3) in their textures. The Capsule is all the better because of its allowance for spacious, quiet moments.

With The Capsule, Necro Deathmort have created a record that confidently permits the listener to fall between the cracks of each synthetic stab and get lost in a void of nothingness.

Having previously released records through Distraction records and Rozeik’s own Extreme Ultimate label (which also recently released the savage new album by Bruxa Maria), The Capsule is Necro Deathmort’s first for the excellent Rocket Recordings label (the current home of Hey Colossus and Teeth Of The Sea).

The Capsule’s opening track ‘In Waves’ is a dark descent into tunnelling, krautrock sci-fi paranoia. It’s propulsive and anxious and totally absorbing. Anyone who used to watch anime videos from the early nineties (or Manga as we used to call them, due to the video label: Manga Video) will feel at home in its eerie otherworldly soundscape. It’s like being in a world designed by H.R. Giger, slippery and fluid.

‘First Rays’ slowly washes over the listener, subtly building and losing pace like a wave of static-ocean, crashing into a virtual shoreline. The stillness amongst the ebb and flow of the waves feels relaxing and safe, but in reality it’s pulling you further and further from stable ground and deeper into Necro Deathmort’s quicksilver head-trip-grip.

‘Capsule Sickness’ starts delicately enough, its twinkling synth floating weightlessly, drifting without aim through time and space. It’s a minimal track with a melody cast adrift in a swirl of void. A hitchhiker looking for a ride in a galaxy that’s really not very friendly at all. The simple melody slowly turns from comforting to menacing, intimidating as though something huge is lurching into sight before slowly fading into nothingness. No threat, no great payoff. Just a sad sense of emptiness.

This sense of sadness is continued in the following track, ‘Crux’, which is the skittish sound of a terrifying but beautiful existential fear. Like tears, in electronic rain. It’s surprisingly emotive and as the conversational synth lines ping back and forth you feel caught in the middle of total abject nothingness. In between the sounds, stripped of everything, it becomes deeply peaceful and relaxing. It’s like looking out into the dark of an abyss and seeing nothing, nothing reflected back at you. No sadness, no happiness. Just a never-ending black. And in that blackness, there is only you. Quite peaceful really.

With The Capsule, Necro Deathmort are more interested in constructing a soundtrack for the stranding of your mind.

The creepy ‘Mono/serum’ begins with a deathly wailing, like the warnings of tortured spirits. It’s very Devilman (another Manga reference for the nerds) in its pained soul terror. The track slowly throbs and weeps into a juttering, hazily glimpsed, gothic cathedral of a structure before collapsing in on itself. The album ends with the ambient duo of ‘Pecklyn’ and ‘Screens’, which are like lost soundtracks to John Carpenter’s The Thing.

Like a feverishly half-seen cathedral, the tracks on The Capsule aren’t structured or solid, they are mercury and shifting, constantly evoking moods and moments. It has an open-ended, dreamlike narrative permeating the entire album. It doesn’t hold your hand or worry that you might get lost, and in not doing so Necro Deathmort have made an album that you can find your own head space in.

To some it might sound isolating and disorientating but for me The Capsule is one hell of a brain-voyage, and one of the best things I’ve heard all year. 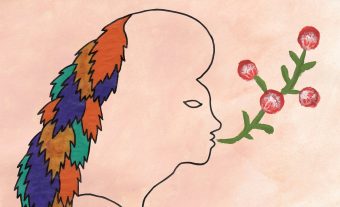 Deerhoof deliver their typically idiosyncratic take on classic rock with 'The Magic', an album that contains exactly what it says on the tin...
Read More