The older us millennials get, the fewer gigs come round which give us the fangirl butterflies of, say, Franz Ferdinand at the MEN arena in 2005 (ahem…). Portico Quartet at ArchSpace may seem an unlikely contender for rekindling that adolescent excitement, but hear me out.

I came across this quartet of saxophone, double bass, drums and – intriguingly – the hang back in 2008 when wandering by the Glastonbury Jazz World stage. For the unenlightened amongst you, a hang is a Swiss instrument resembling an upturned wok, diveted with a series of ‘tone fields’ which each produce a sound somewhere between a steel drum and gamelan metallophone. It sounds bloody gorgeous. 16-year-old Emma was instantly hooked, and the next week I got myself straight to HMV Liverpool to buy the Mercury-nominated Knee Deep In The North Sea. Since then, the band’s eerily beautiful compositions have become an integral part of my life soundtrack: whether that’s staring wistfully out of rainy train windows, keeping calm in long A&E queues, or drunkenly springing their records on unsuspecting party guests (as our editor can testify).

We finally coincided in a live setting again when they had rebranded as Portico in 2014. However, for me the experience was bittersweet, as the departure from hang-infused jazz was just too extreme. So when it was announced that Portico Quartet were reforming in the old style, and kicking things off with a series of gigs at ArchSpace, the butterflies were out in force.

We walked past the ArchSpace entrance twice before realising that this tiny, makeshift room was to be our venue for the night; it could easily have been mistaken for a second-rate open mic night. Sending a context-less photo of the empty stage to a friend prompted a conciliatory reply assuring me that my band would probably get to play somewhere bigger soon. 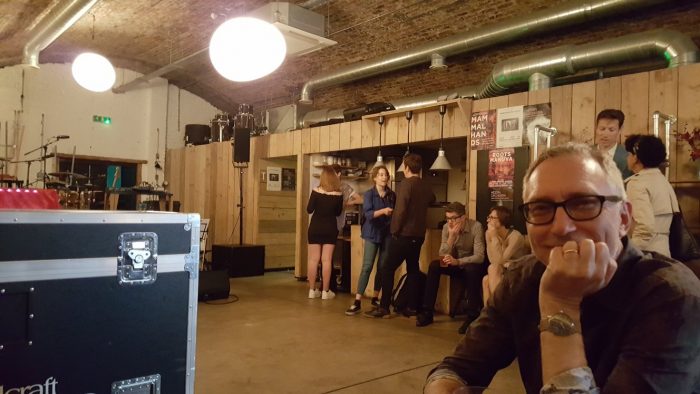 With most music-loving friends otherwise engaged at Glastonbury, it fell to my dad to chaperone… no changes from Franz 2005 there then.

When Portico eagerly took to the stage, the intimate space made immediate sense; the thought of them playing Scala this October has something ogre-ish about it by comparison. They opened with ‘Endless’, the first track from their upcoming album Art In The Age Of Automation. It is a fearless return to form, combining all the elements which originally made them so adored. There is the exotic sparseness of the hang, the reverb-laced saxophone, the broad bass rumbling through the room, and also the electronic pulse that echoed through their third, eponymous album. The percussion is almost childishly excitable; there is a tangible sense of a new dawn in the band.

On stage, Portico Quartet are an industrious hive of activity. Ears cocked listening in for the subtle shifts which make up each songs’ structure, they come in and out of the music like children jumping into an intricate playground skipping rope game. Whilst they are clearly so engaged with their own sound, there is still a strong connection between us and the band (the venue made that basically inevitable from a physical perspective). By its nature, Portico Quartet’s music invites a hypnotic group experience, whether that’s through the gentle polyrhythms of the hang, drums and bass or the frenzied climaxes of the saxophone. I’ve heard a few people dismiss Portico Quartet as overly pretentious or claim they’re taking life too seriously. But you don’t get any sense of inflated ego from their shy smiles, or drummer Bellamy’s playful exchanges with the crowd.

I didn’t think people ‘gasped with delight’ except in novels, but that’s exactly what I did when, mid-set, Bellamy announced that ‘Line’ would be the next song. A few other enamoured crowd members grinned at me knowingly. The song centres on a single repeated hang motif which is soon joined by a deceptively quiet, devilishly quick ride and snare line, held for seven minutes or more. Simulate playing it yourself for more than half a minute and you’ll be struck down with ghost cramp and extreme dizziness. Finally, Wiley’s sustained saxophone soars over the top, together with about two dozen carefully chosen fragments of double bass, which work as a mysterious anchor. For the Archspace performance, Vine swapped out the usual hang drone with the refrain used in ‘Rubidium’ as the basis, satisfyingly noted by the nerdier crowd members.

Further tracks from Art In The Age Of Automation boded well; like ‘Endless’ they were fresh yet faithful to the quartet’s strengths. I missed any nod to Knee Deep In The North Sea, but really that’s me nit-picking to give this review some semblance of neutrality. In truth, this gig was up there with the best I’ve experienced: I was left smiling and speechless by the absorbing beauty of the music, the technical skill, the transcendent crowd experience. And, of course, what self-respecting fangirl doesn’t love being within touching distance of her favourite popstars? 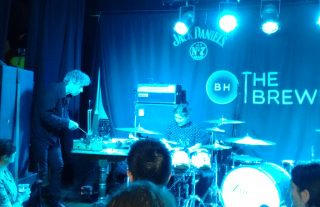