Everything about last Thursday looked like it was going to be a gig by Portico, née Portico Quartet. Islington Assembly Hall, a lovely slice of art deco squeezed amongst the Waitroses and flat white vendors of fancy North London, was a fitting setting for this well-to-do group of musical pioneers. From 7pm onwards, diligent bespectacled fangirls and boys sat patiently on the venue floor, pomegranate cider in hand, in anticipation of a long-overdue dose of sprawling, jazz-inspired indulgence.

We stood up for Luke Abbott, who enjoyed an introverted forty minute nerd-out with his modular synthesiser. His polyrhythmic wanderings across ethereal and krauty soundscapes suitably whet our appetites for what was billed as ‘the next chapter of the Portico journey’.

For the good of your health, here is the musical mapping from 2007’s Portico Quartet to 2014’s Portico:

Coming onstage, all seemed well. The opening track, with the promisingly abstract name ‘Void’, ticked off a number of Portico Quartet trademarks: expansive chords moving at glacial pace, reverberating bass notes, the slow concoction of a textural soup which caused the earnest crowd to start rubbing their hands together.

But here’s the thing: a lot of bands conjure up this kind of swooping theatrical intro before getting on with the ‘real’ stuff, you know, with a proper beat and that. Weirdly, this was more or less the purpose ‘Void’ served in Portico’s set. And after it, the ‘real’ stuff was decent, but just… different. The likes of ‘101’ and ‘Atacama’ (both of which will feature Alt-J’s Joe Newman on the record) had a nifty commercial quality destined for the 6 Music daytime playlist, i.e. solid 3-and-a-half minute collations of pretty riffs over trendy electro beats. And I repeat: nothing wrong with that.

Onstage, the band formed a democratic semi-circle, and it was novel to see the drummer of all people adopting the chatty frontman role. Bellamy was very at home with his new set of electronic toys, employing his percussionist hands to set off all kinds of weird and wonderful note patterns over his trusty snare. Freed from the sax, Wyllie contentedly surveyed his bandmates whilst overlaying minimalistic melodies onto the neat bass and drums. The arrangements were impressive, and on first listen the music was good – it was just a very unexpected ‘School of Rock’ makeover, where a bunch of university jazz nerds emerged triumphant in a puff of zeitgeist cool, hipster glasses and all.

A word on the newbie vocalist, Ninja Tune label-mate McCleery. Sporadically, the wordy additions worked well, containing what I remember to be some pretty conceptual sounding stuff that will be interesting to revisit in more depth when the album is released. In ‘Into a Vision’, cascading down scales, and ‘Brittle’, soaring over intense synths, his voice melded into Portico’s sound, which I would argue is fundamentally instrumental in nature anyway. But as he was yelping “Memory of newness! Memory of newness!” in the busy track of the same name, it just all got a bit Bono in Bandaid… i.e. please God leave the song in peace and over-enunciate elsewhere.

The most promising track for me was ‘Bright Luck’. Here, Portico exhibited a deliciously dark, James Blake-y intensity, as pulsating low arpeggios gathered momentum, in this case complimented by some multi-layered harmonies by McCleery and increasingly intricate rhythms courtesy of Bellamy. It’s the closest the gig brought me to the otherworldly ecstasy of the old quartet: again, I just wished it hadn’t ended after four minutes.

Based on Thursday night’s snapshot, I have a feeling the release of the Living Fields album in March will herald a mass exit of the current flock of Portico Quartet followers, to make room for a new fan clan. These guys will be no less savvy in their appreciation of fine musicianship and a good tune – just free from the crippling expectations formed by three pristine albums of Portico Quartet. And you will probably find me amongst the disgruntled flock of sheep cast out into the wilderness, bleeting forlornly for rambling eight minuters, rabid saxophone solos, and, if at all possible, a hang. 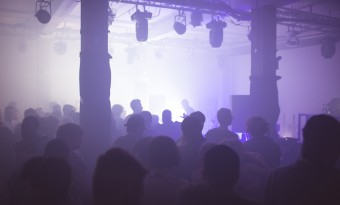 No drugs, no chewing gum and no money for booze, but The Hydra's Leisure System x Houndstooth night is saved by Clark, Plaid and an incredible sound system...
Read More