The one time I’d been in the main space at Rich Mix previously was an accidental affair. Finding myself with some spare minutes before a film upstairs, I unwittingly stumbled into a forlorn poetry reading, where a doomed young soul detailed the minutiae of her city grad scheme. Last week it was a relief put this most grim of London memories to rest, and to find the place sold out with a proper Friday night buzz about it, any overhanging Shoreditch pretentions done away with.

Coming onstage, Red Snapper were an unlikely looking lot; double bassist Ali Friend, drummer Richard Thair and electric guitarist David Ayes have gained a few jowls and misplaced a few hairs since their 1993 formation, making saxophonist Tom Challenger look positively whippet-like in their presence. But Friend and his wry smile knew was about to be unleashed, and so no apologies were made for the dad-ish vibes they initially gave off.

They began with two tracks from new album Hyena, Red Snapper’s proposed soundtrack to the 1973 Senegalese drama Touki Bouki. I say ‘new’ – this, the album launch gig, was happening four months after the cancellation of the original date way back in September. In a way that was quite nice though, as the new tracks were practically received as golden oldies.

In their recorded forms, ‘Card Trick’ and ‘Dock Running’ have been taking me back to my heady twelve year old days of zooming round San Francisco on Driver for PS1; palatable retro funk, albeit with the synth lines always in danger of sounding tacky and better suited to a B-rate ’70s car chase. But live, the energy of the band and the cracking sound quality of the Rich Mix venue brought these tracks unexpectedly to life. Which makes the whole thing frustratingly ‘had to be there’, as the studio versions just don’t have the legs to bring out those raw saxophone high notes that ricocheted around Rich Mix – for now, you’ll just have to take my word for it.

The gig really found its mojo when Hyena gave way to of a grittier string of pre-millenium material. It was plain mesmerising to watch Ali Friend circle round and round the breakneck double bassline of Prince Blimey’s ‘Get Some Sleep Tiger’, before the freestyle jazz elements gave way to the more electronic groove of ‘Snapper’ and the audience had no choice but to get their bloody funk on.

What I like about Red Snapper generally is the balance they find between the nerdy jazz solo – which the Beat Generation in all of us needs to succumb to every now and again – and a relentless electronic drive to keep our 21st century attention spans in check. The resulting live act is a blend of eyes-scrunched-up musical indulgence and flat out beat-driven boogying.

What Hyena adds to this is a studied Senegalese slant: in ‘Wonky Bikes’, Friend took to a conspicuous wooden box that had lain dormant centre-stage for most of the gig. It turned out to be a West African slit drum, and attained ‘This Guy’ levels of popularity with the crowd by the end of the song, as Friend trilled out impossibly quick riffs and our feet tried to keep up.

Red Snapper’s 22 years in the biz was reflected in the ease with which they won over the notoriously too-cool East London audience. The set was masterfully crafted, first pulling the crowd in with the darker strands of the acid jazz scene, before sending us into a flared-trouser euphoria with the likes of super smooth ‘Village Tap’ and sunshine soaked ‘Bricked’.

We left with loosened limbs and ringing ears, and hoping that their next appearance in the capital would not be four months post the release of the next album, but rather… next Friday? In fact, just every Friday? That would be ideal, thanks. 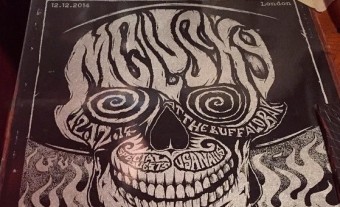 The death of the mighty Buffalo Bar brought about the brief resurrection of the mighty Mclusky, as they got the venue's demolition job underway with a typically explosive performance...
Read More