Taylor McFerrin is a third generation musician, the son of Bobby McFerrin (roughly summed up musically by ‘Don’t Worry, Be Happy’) and grandson of singer Sara Copper and Robert McFerrin, the first African-American opera singer to perform at the Metropolitan Opera in New York. So it’s definitely fair to say that music runs in the family – Bobby McFerrin even lends subtle guest vocals to his son’s album, soft scatting among birdsong to intriguing effect.

Early Riser is a sophisticated début, displaying gentle spiritual roots and a blend of freeform jazz and electronica. The album opens with ‘Postpartum’, floating the implication of postpartum depression on airy melodies that are studded with breathy tones: ‘I want to love you’. The track begins quietly, a beating heart and first breath joined by a simple air and words, and inexplicably builds to exquisite heights. It’s a worthy entrance to a début, thoughtful, absorbing and open in terms of genre – it easily eludes jazz, electronica and singer-songwriter labels.

‘Degrees of Light’ strays into that strain of bedroom electronica typically defined by simplistic overlapping melodies, slightly and deliberately off-time, and displaying the innocence of electronic exploration. But it builds simplicity on simplicity, adding clapping rhythms that introduce a rare human element into Mcferrin’s feelgood electronics and turning it into the ideal summer track.

Guest vocalists are introduced fairly early on: ‘The Antidote’ brings the effortless honey of Nai Palm’s half-sing half-talk into the fray. Paired with bubbling bass and throwback dance melodies, this track maintains a sunny urban vibe, advancing the tone of the album and mashing gentleness and energy.

Glowing goodness runs throughout Early Riser and it comes across as a really wholesome album. The dreamy opening of ‘Florasia’ – “Reasons for leaving you…” – make me think that Taylor is about to take a turn for the Drake, but it’s followed up pretty quickly with, “… I can’t think of/Never had to.” Sure, it’s a pretty forced rhyme, but it’s also quite a revealing insight into McFerrin’s sweetness.

After ‘Florasia’ the album takes quite an improvised jazz turn: ‘4am’ contains an interlude that embodies literally everything I would never want to hear at that ungodly, ungodly hour, while ‘Stepps’ wanders into the Café del Mar chillout room and stays there. The improvisation is continued in ‘Already There’, featuring pianist Robert Glasper and bassist Thundercat and combining underlying jazz themes with experimental electronics, offering a doorway into the room before the esoteric world of freeform jazz.

Emily King, regarded as “one of the best singers alive” by Mcferrin, displays her enigmatic voice on ‘Decisions’; this would make a great late-night radio début. ‘Blind Aesthetics’ serves as a vague and fluffy interlude, but is chased up by ‘A Place in My Heart’, featuring McFerrin’s Brainfeeder labelmate RYAT. In a way, it serves as a long trailer for RYAT: her voice expresses that unhinged quality particular to Björk, with a cloak of delicacy that is haunting and absorbing. Taylor McFerrin’s instrumental pairs with her voice perfectly: he’s perfect at weaving an instrumental around a vocal, including his own. Early Riser would benefit from featuring vocals on every single track, since this is easily McFerrin’s strength: his purely instrumental tracks can be slow and even a little vacuous.

‘PLS DNT LSTN’, which as a gleeful voyeur I had to listen to, initially offers a glimpse of a genre I think it’s best to refer to as Jazz-Industrial… It’s so interesting, though it quickly devolves into improvised jazz via generic singer-songwriter guitar riffs. But while stretching out musical muscles, McFerrin displays through the self-referential title a certain knowing insecurity that is quite charming.

There’s no part of the album that doesn’t feel warm and good, and it’s tempting to equate this with implied goodness of heart or even naïve innocence. Early Riser certainly encompasses more complexity than first appears, but really it’s more of a smiling homage to shining sun, and that’s a fine and lovely thing. 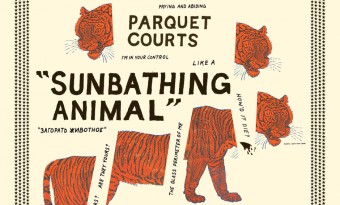 New York rapscallions Parquet Courts present the sort of album Top Cat would stick on after a long day hiding in dustbins from Officer Dibble. And who wouldn't want to listen to that?
Read More