Birmingham’s Supersonic Festival has become a sort of Mecca for people with more exciting music taste than you. Every year the organisers put together a daring line-up of wild and uncompromising music, and every year I fail to attend. (The curse of having to work most Saturdays.)

Luckily, this year The Wire teamed up with promoters par excellence Baba Yaga’s Hut to offer something for us poor souls unable to make the trip up from London. Taking over the London Fields Brewery last Friday, they offered an unofficial taster of the festival featuring three performances set to entertain the Supersonic crowd over the weekend, and all without leaving the M25. Nice.

First up on a sweltering Friday night was Canadian violinist Jessica Moss. Better known as a member of Black Ox Orkestar and Thee Silver Mt. Zion Memorial Orchestra, this year saw her release a stunning solo album on Constellation Records. Pools Of Light is a record that periodically swells to gargantuan proportions, and looking at the smorgasbord of effects pedals laid out in front of her, you start to understand how she does it.

As on the album, Moss switches from gradual, tentative repetitions to grand, multi-layered drama with ease, while teasing plenty of surprising sounds from her set-up. At one point her descending glissandos resemble the dropping bomb noise on one of those cheap sound effects keyrings from the eighties; at others the sense of scale reaches Game Of Thrones battle scene proportions.

The atmosphere is such that even background noise is somehow subsumed into the overall effect. The gentle rumble of trains passing overhead, the splash of line cleaner being decanted into a sink, even the Gallic chatter of the couple sat next to me (which would normally be annoying); all seem to become part of Jessica Moss’ ocean of sound. At least until somebody loudly blows their nose behind me, when the spell is abruptly broken.

And it is quite literally a box of tricks. Somewhere between a sewing machine, a music box, a mbira and a Meccano set, Bastien presides over a self-constructed, multi-faceted jack-in-the-box of sounds. 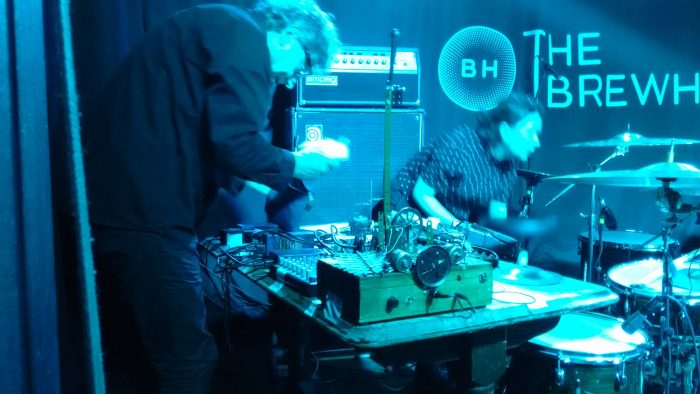 Initially the trio’s output resembles a tropical adventure on a paradise island where literally everything has gone wrong, before settling into a dark, psyche-scratching funk. Once there, they whittle the formula into uncannily familiar shapes. At one point it could be the soundtrack to Midnight Cowboy if performed in the middle of an ayahuasca ceremony, at another it warps into a sort of cumbia, if the genre had been invented after a 48-hour period of sleeplessness.

Pierre Bastien’s contribution is both aurally and visually fascinating, incorporating everything from a flapping sheet of paper to a variety of tubes placed into a rotating mechanism, which then produce a hypnotic, discordant ostinato. The trio end with a hailstorm of clockwork percussion, at which point my companion laughingly declares it the most avant garde thing he’s ever seen. Perhaps, but it sure is groovy.

A special word for Valentina Magaletti, who is phenomenal throughout. It’s only afterwards I find out that she and Relleen also play in The Oscillation, whose rhythm section we’ve previously raved about. Makes sense.

Next, it’s Zu. Being unfamiliar with the Rome-based trio, I did a bit of reading up before the gig and was thus prepared for meaty metal riffs being belted from a saxophone rather than flung from a guitar. That’s what they gave us, and then some. Right into our sunburnt faces. 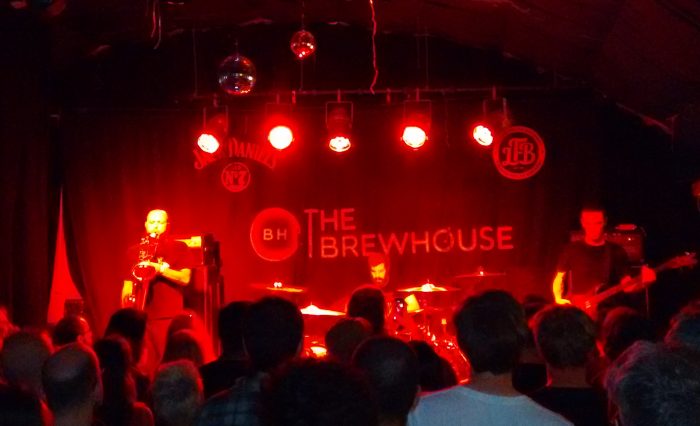 Zu are an absolute blunderbuss of noise. All the power and brutality of metal, but with a distinctly earthy, brassy tone. At times it’s like being subjected to a warm, gusting breeze that happens to be blowing you off the edge of a cliff. The guttural intro to one track sounds like Mount Vesuvius getting ready to erupt. And then erupting. The bassist laps it all up, while lassoing a loose lead around to create a grubby zoetrope of sludge.

Zu-time over, we dust ourselves off and depart into the humid night, feeling palpably jealous of this year’s Supersonic attendees getting to experience all that and more at this year’s festival. Suffice to say, I’ve already booked off every weekend in June 2018. No excuses next time. 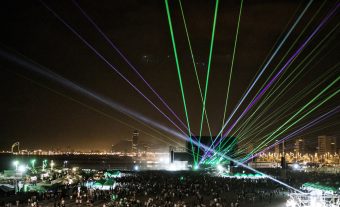 From the stylish stagecraft of Solange to the samba singalongs of Seu Jorge, check out our review of Primavera Sound 2017...
Read More