We’re big fans of ORKA here at The Monitors. Formed over a decade ago, the Faroe Islands collective initially produced industrial pop music at its most pure, literally turning agricultural tools into musical instruments. After earning a couple of Nordic Council Music Prize nominations for their efforts, founder Jens L. Thomsen took a different approach on last year’s Vað, taking samples of those instruments into experimental techno territory with the assistance of producers like LV and Oktopus (formerly of Dälek). The resulting record, as we noted in our review, “doesn’t so much improve on the previous ORKA formula as rip it into shreds and start again from scratch, resulting in a crazed fit of ‘Eureka!’ moments.”

Now ORKA have returned with a new EP entitled <13, and we can give you an exclusive first glimpse of it in the form of closing track ‘Ivanov’. With Oktopus once again contributing, the track continues the fearless exploration of what they term “twisted neanderthal techno”, although with many a curious shape floating in the murky water. Built on a unfaltering 4/4 beat, the track conjures up visions of haunted vacuum cleaners, ghostly choirs, broken toys and a school of anglerfish out looking for a good time. It’s one of the best ORKA tracks to date, and you should fill your grateful ears with it now:

“The track Ivanov is named after Serge Ivanov”, Thomsen explains, “who together with Tsz-Man Chan created the Papay Gyro Nights festival and has invited ORKA to play several times in Orkney and Hong Kong.

“The initial beat was made on Oktopus’ MPC while we were touring Europe. We sampled ORKA’s instruments as well as found sounds including a toy piano, which Høgni Lisberg (HOGNI, Eivør) who was touring with us, bought at a market we passed. The tune then went through many changes through many years between that tour in Germany, Oktopus’ studio in New York and my studios in London and Faroe Islands before we finally felt that it was complete.”

<13 is ORKA’s 6th release and will be released on cassette and digital on July 21st via Cargo Records and Kervið. Before that ORKA play a pre-release party at Peckham’s Rye Wax on July 5th, with Daniel Cherney, IYDES and DJ Ben Osborne (Noise Of Art) in support. It’s free so do the sensible thing and get down there early…

Jens L. Thomsen has also created a pan-Nordic soundscape of sea, sky and wildlife from across all eight Nordic Countries called NORÐ, which is open to the public for free at Royal Festival Hall, Southbank Centre (Level 5 foyer), from 10am every day between today and August 30th. It is part of Southbank Centre Summertime programme and year-long #NordicMatters festival. 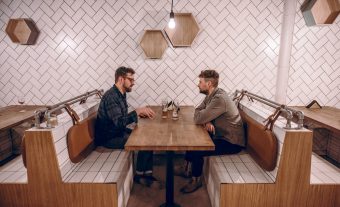 A serendipitous meeting of minds in a Manchester studio resulted in the shimmering sound of San Eco. Listen to an exclusive first play of 'OPM'...
Read More