It seems auspicious that the new album by inventive Faroe Islands collective ORKA comes out just as their previous album, 2014’s Leipzig, finds itself nominated for the Nordic Council Music Prize.

If Leipzig is deserving of a nomination, ORKA’s visceral follow-up Vað is surely certain to take the prize next time around – and several more besides. It doesn’t so much improve on the previous ORKA formula as rip it into shreds and start again from scratch, resulting in a crazed fit of ‘Eureka!’ moments.

ORKA’s approach has always been unique, revolving around home-made instruments manufactured out of agricultural machinery, light fittings and pretty much anything else that happens to be to hand. Not that you’d always have known it. While the found sounds and re-appropriated tools often added an industrial tinge to ORKA’s compositions, they rarely detracted from what were actually pop songs, lacquered with smoothly intoned vocals that belied the more jagged elements. Tracks often tasted like sweet, sticky honeycombs with the occasional bee still mummified inside. (A cutely industrious method perfectly reflected in the animated video for ‘Black Ice Age’.)

Vað on the other hand is entirely instrumental. The “seemingly endless credits list” (as ORKA mainstay Jens L. Thomsen puts it) that shared in the success of Leipzig has now been stripped down to just five contributors, including London production duo LV and former Dälek member Oktopus. “We wanted to avoid overproducing and rather stay true to the roughness and immediacy of the core ideas,” explains Thomsen. “This approach has given it an almost neanderthal sense of texture and pace”. He’s not lying. Any syrupy veneer has been thoroughly scrubbed off, leaving the brutalist core to not just take centre stage, but crush it.

The clanking techno of ‘Grind’ shows just how hard this new incarnation of ORKA are willing to push things, storming in after ominous opener ‘Igulker’ like a deranged golem made out of spanners. It’s the sort of hollow-eyed dancefloor punisher that would find a darkly packaged home on any number of experimental Berlin electronic labels. On one occasion while listening to it a nearby builder started inadvertently hammering along in time, which only added to its vaguely uncanny edge.

The brooding ‘Dís’ and stuttering ‘Blik’ help keep the brew bubbling nicely, before ‘Dimmalætting’ ramps the tempo up again with series of scattergun kick-drum hits. This time, however, the grimacing percussion is tempered with some unexpectedly blissful synths, a juxtaposition that really lifts the track before it crashes back down to earth, leaving the twisted industrial dub wreckage of ‘Vrak’.

The title track kicks off Side Two in calmer fashion. While still sparse and murky, the high-pitched drone and spectral synth elements of ‘Vað’ mean a sliver of light is allowed to snake its way through the darkness, giving it perhaps the best tonal balance of any track here.

The more tranquil frequencies in the second half do make for a slightly less memorable experience, admittedly. ‘Skin’ attempts something similar to ‘Vað’ (although the more ’80s-sounding synths don’t float my boat quite so buoyantly) and the dreamy submarine voyage of ‘Djúpini’ is lovely, but they’re more likely to press your lapels than grab you by the collar. The whispering, gurgling ‘Kav’ is more disarming, but sadly only 1:11 long.

Still, if Side Two sees Vað settling down after the cyclone of Side One, closer ‘Torva’ sends us off to a very unsettling sleep. The creeping synth phrases and bare, dry percussion feel like a pair of hooded eyes watching you, dimly lit by the smouldering campfire that’s just starting to burn to black…

It’s this underlying sense of menace that makes Vað easily the best ORKA album to date. “I felt the need to make a record which had fewer elements which I could focus on,” says Thomsen. That focus has never been so acute, and the results never so true to the industrial tools and imaginative minds that generated them. 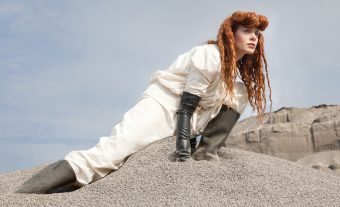