Our typically late round-up of August’s best EP releases collects together sterling work from Chicago’s Wei Zhongle to Leeds’ Bambooman, plus a host of other cross-genre luminaries…

Bambooman has previously always appeared on this site alongside Segilola, for whom he produced the superb Somewhere Along The Line EP back in 2014 and the equally impressive Halt last year. His new Feel EP, the first release on Accidental Records sub-label Accidental Jnr, may not boast Segilola’s sweet tones, but the diversity of textures and tempos means it still ranks as an absolute pearler.

Things get off to a quiet start, but in a good way. The soft synths of ‘Stargaze’ wash over each other in para-rhythmic waves, accompanied by a field of chirruping, digi-crickets. It’s the perfect set-up for the title track, which while still sparing in terms of ingredients still builds its way into a tight groove. The spaciousness of the production allows disparate elements, from glass-smashing punctuation to analogue synth sounds, to complement rather than jar. Seductive stuff.

The discordant crescendos of ‘Foundation’ make it my personal favourite on Feel. Notes are twisted almost excruciatingly out of shape, only kept in place by the hammering percussion, before a gorgeous, chiming coda offers resolution. ‘Crushed’ also has an industrial touch, with a metallic beat that sounds like it’s just been subject to a hydraulic press then left to recuperate on a sickly rave pad.

The ticking ‘Time’ then provides the EP’s satisfying resolution. Hopefully it won’t be too many ticks until the next Bambooman arrival.

Blue Blue Youth – We Are Wood and Likely to Burn

Blue Blue Youth is a collaboration between Drew Diver (Soda Shop) and Julian Brau (Suturee). I’m going to be honest and admit that I don’t actually recognise any of those names, in parentheses or out, but the quality of the music they’ve produced here suggests this is clearly a shameful oversight on my part.

A gentle, reflective piece of work that’s just melodic enough to help it spread beyond the ‘Ambient’ section, We Are Wood and Likely to Burn is more a cosy, crackling campfire than an explosion in a timber yard. From the shimmering ‘Now We Wait’ to the gingerly unfurling ‘I Admit I Aim Low’, it’s music played with patience and restraint, swamping you with deep, slow undulations.

The track titles (‘I Should Have Slept’, ‘Maybe Not Today’) suggest pervasive ennui, even depression, but the opening and close of the record exhibit a heartfelt sincerity that’s far from sombre. The middle, however, has a darker tone, not least in the yawning voids ‘I Think It’s Death’ exposes you to, while the post-rock stride of ‘And Then One Night the Shapes Returned’ displays Blue Blue Youth at their most dramatic.

Like something by Bohren & Der Club of Gore, the record’s glacial piece makes its creeping atmospheric takeover all the more effective, and by its end it’s likely you’ll be fully consumed by its smouldering flames.

Dopethrone’s recent performance at The Underworld in Camden got a strong write-up on this very site recently, but how do their most recent recordings shape up against the boiling fuzz of their stage show? Well, 1312 may come in shy of a dozen minutes (which some in the doom/sludge/stoner scene might think hardly enough time for one track let alone three) but those minutes are used with devastating potency.

‘Shot Down’ is the stand-out. It opens with a sampled warning to lock your doors and windows, although frankly it’s pretty pointless advice as not even the mightiest Chubb could stop your doors being blown in when that riff hits. It’s a tattooed, scar-strewn throttler of a track, and every second it spends wrapped around your throat is a glorious one.

The insalubrious ‘Drifter’ takes us further into the gutter; while not as persuasive as ‘Shot Down’, it wins you over (or wears you down) through sheer, growling, heavy-paced hulk. Kudos to vocalist/guitarist Vince for a proper filthy recurring cackle too. The charmingly-titled ‘Skag Reek’ then sees us out with a cheerful boot to the backside, and a riff that almost matches the opening one for fetid intensity. All in all, the muckiest twelve minutes you’ll enjoy this month.

Space. Where apparently no one can hear you scream. Or, as far as I know, play a 12″ of crisp, bassy jams. Which is why you’re probably better off down here on earth for the time being, as it is here that the latest Djrum record Space Race can be consumed at your leisure. And you’re likely to want to do that fairly frequently.

The first track, ‘Space Race Pt. 1 & 2’, is the really orbit-breaking one. Starting at a relaxed tempo and blessed with an appropriately spacey choir pad and a brilliantly swung beat, after a couple of minutes it smartly switches tempos and suddenly slips into DnB territory. The beat intensifies as the zero-gravity starts to take effect, dropping out for the occasional space-walk, before finishing somewhere beyond Saturn’s rings.

It’s hard to come back down to earth after that, and luckily ‘Sometime I Share’ ensures you don’t have to straight away. While more formulaic than the A-side, the peppery snares and tightly-chopped claps of the beat are immaculate, and the track grows more absorbing as it progresses, ending with a jazzy mix of fragmented samples as the beat fades away.

Nostro Hood System label boss Galtier puts out his latest EP on Infinite Machine, the Montreal-based label that’s had a rather impressive run of late, including releases by highly-rated Russian trio WWWINGS and Berlin’s brutal Ziúr. Galtier’s ‘Myth Codes’ may be their strongest to date though, dismantling and repackaging the myriad forms that constitute Bass Music to produce a record so solid it could be used as a breezeblock.

Opener ‘Chain’ uses, yes, the sound of a chain to get the ball rolling, setting up a midtempo slice of eerie, bass-boosted flexing. ‘Gold Bones’ then excavates a tasty grime riff to display over a similarly sparse and heavy backdrop. The faster-paced ‘Charm Complex’ is perhaps the best of the lot though, opening with a haunting drone before sparking to life with rattling percussive rolls and a surprisingly chirpy bit of flute (a nod to Herbie Hancock’s Head Hunters version of ‘Watermelon Man’, and thus a modern descendant of this). ‘Charm Complex’ isn’t overly complex, but it sure is charming.

A couple of remixes round the record off, with Tropical Waste co-founder Iydes’ lively dancehall version of ‘Chain’ pipping Luke West’s take on ‘Gold Bones’ for me. Overall it’s another cracking release from Infinite Machine, as Galtier goes from strength to strength.

Maybe I’m just a paranoid gooner, but the title 5TARB01 features the sort of numerical/alphabetical interplay Spurs fans used to celebrate Tottenham’s 5-1 victory over Arsenal back in 2008. However, in this case I’m going to give Lexxi the benefit of the doubt and assume that the titular 5TARB01 is not Jermaine Jenas or Robbie Keane but instead the South London producer himself. Certainly this EP, the first on new label Endless Xclusive, smacks of star quality.

The spooky sweeps and pulses of the opener gets us off to a good start, before the distinctive strands of ‘Red Eyez V.I.P’ takes us into more melodic territory. (Admittedly the catchiness of this track might be partially down to familiarity – another version of it appeared on the Elysia Crampton record we reviewed here last month).

‘$EVER0’ packs one hell of a distorted punch, which finds itself thrown directly into your face throughout its first half before dissolving into a more soothing second half; a neat one-two. The thumping, reverb-dosed ‘No Order’ doesn’t leave quite as stark an impression, but the colliding bleeps of ‘Up Top’ means you leave with plenty of Lexxi-style sonic carnage echoing in your ears. I’d like to see Jermaine Jenas do that.

I’m not sure why the vanguard of Italy’s electronic scene has been obsessed with non-Western rhythms over the last few years, but it’s an obsession that should frankly be encouraged. Clap! Clap!, TSVI and Gqom Oh! chief Nan Kolè have been leading the scene in this respect, and the latter both appear on Wallwork & Nico Lindsay’s incendiary recent 12″, which provides yet more evidence that Black Acre is becoming one of the most vital indie labels in Britain, let alone Bristol.

Tommaso Wallwork is half-Italian and half-English, and the same goes for ‘Facts’, which sees TSVI and Nan Kolè’s contributions complemented by the strictly London bars of Nico Lindsay, one of the capital’s most forward-facing MCs. Lindsay slips fluid, casually self-assured bars onto the almost comically strident samba beats of the title track like it’s no big thing, and the combination manages to make a track that initially seems to exist purely to move feet into something even more satisfying.

Most of all it’s fun, and that goes double for ‘Fyah’, the Nan Kolè feature that naturally errs more towards the Gqom. Sparse yet funky, Lindsay’s delivery enters machine gun territory at times but always stays tightly tied to the beat. The record also comes with an instrumental of ‘Fyah’, but frankly it’s the full version that demands to be heard. Hopefully this is a collaboration we’ll be hearing more of in future, because two tracks is just not enough…

Chicago quartet Wei Zhongle end this month’s EP Address with the most diverse record of the lot. Take the eddying 7-time phrases of the dizzying ‘Nothing New’ or circling 6/8 groove of ‘Examine It’, for example. Go on, take them you fools!

If less common time signatures make you fear a difficult listen, worry not. Wei Zhongle craft their more angular aspects into succulent results, from the funky licks of ‘Prove It To U’ (with not just the ‘U’ of the title suggesting something distantly Prince-like) to the toe-tapping qualities of the aforementioned ‘Nothing New’.

The best tracks however are probably those that bookend the EP. ‘Greeting Song’ is catchy enough to follow in the gold-paved footsteps of Glass Animals, while ‘Decentralized’ is, in contrast, probably Wei Zhongle’s most engagingly unconventional recording, finding a woozy orbit around intriguing para-rhythmic plot points. If the music on this record is but a mask, then here’s hoping Wei Zhongle never take it off. 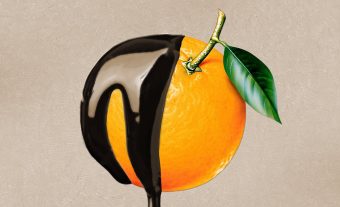 Swallow down a spoonful of Kan Wakan's 'Molasses', alongside a lick of Thom Yorke's 'Coloured Candy' and a nibble of Frau Pouch's 'Biscuit Beard'...
Read More